Carnitine palmitoyltransferase I (CPT1) also known as carnitine acyltransferase I or CAT1 is a mitochondrial enzyme.[1][2] It is part of a family of enzymes called carnitine acyltransferases.[3] Three isoforms of CPT1 are currently known: CPT1A, CPT1B, and CPT1C. CPT1 is associated with the outer mitochondrial membrane and mediates the transport of long-chain fatty acids across the membrane by binding them to carnitine. This enzyme can be inhibited by malonyl CoA. Its role in fatty acid metabolism makes CPT1 important in many metabolic disorders such as diabetes. Since its crystal structure is not known, its exact mechanism of action remains to be elucidated. 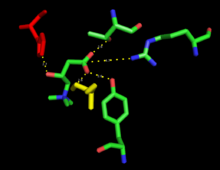 Carnitine bound in the catalytic site of CRAT, an enzyme homologous to CPT1. The catalytic histidine and stabilizing serine residues are colored orange.

CPT1 is an integral membrane protein that associates with the mitochondrial outer membrane through transmembrane regions in the peptide chain. Both the N- and C-terminal domains are exposed to the cytosolic side of the membrane.[4]

The exact structure of any of the CPT1 isoforms has not yet been determined, although a variety of in silico models for CPT1 have been created based on closely related carnitine acyltransferases, such as carnitine acetyltransferase (CRAT).[7]

An important structural difference between CPT1 and CPT2, CRAT and carnitine octanoyltransferase (COT) is that CPT1 contains an additional domain at its N-terminal consisting of about 160 amino acids. It has been determined that this additional N-terminal domain is important for the key inhibitory molecule of CPT1, malonyl-CoA.[8]

Two distinct binding sites have been proposed to exist in CPT1A and CPT1B. The “A site” or “CoA site” appears to bind both malonyl-CoA and palmitoyl-CoA, as well as other molecules containing coenzyme A, suggesting that the enzyme binds these molecules via interaction with the coenzyme A moiety. It has been suggested that malonyl-CoA may behave as a competitive inhibitor of CPT1A at this site. A second “O site” has been proposed to bind malonyl-CoA more tightly than the A site. Unlike the A site, the O site binds to malonyl-CoA via the dicarbonyl group of the malonate moiety of malonyl-CoA. The binding of malonyl-CoA to either the A and O sites inhibits the action of CPT1A by excluding the binding of carnitine to CPT1A.[9] Since a crystal structure of CTP1A has yet to be isolated and imaged, its exact structure remains to be elucidated.

Because crystal structure data is currently unavailable, the exact mechanism of CPT1 is not currently known. A couple different possible mechanisms for CPT1 have been postulated, both of which include the histidine residue 473 as the key catalytic residue. One such mechanism based upon a carnitine acetyltransferase model is shown below in which the His 473 deprotonates carnitine while a nearby serine residue stabilizes the tetrahedral oxyanion intermediate.[3]

A different mechanism has been proposed that suggests that a catalytic triad composed of residues Cys-305, His-473, and Asp-454 carries out the acyl-transferring step of catalysis.[10] This catalytic mechanism involves the formation of a thioacyl-enzyme covalent intermediate with Cys-305.

Acyl-CoA from cytosol to the mitochondrial matrix.gif

By acting as an acyl group acceptor, carnitine may also play the role of regulating the intracellular CoA:acy-CoA ratio.[12]

CPT1 is inhibited by malonyl-CoA, although the exact mechanism of inhibition remains to be known. The CPT1 skeletal muscle and heart isoform, CPT1B, has been shown to be 30-100-fold more sensitive to malonyl-CoA inhibition than CPT1A. This inhibition is a good target for future attempts to regulate CPT1 for the treatment of metabolic disorders.[13]

Acetyl-CoA carboxylase (ACC), the enzyme that catalyzes the formation of malonyl-CoA from acetyl-CoA, is important in the regulation of fatty acid metabolism. Scientists have demonstrated that ACC2 knockout mice have reduced body fat and weight when compared to wild type mice. This is a result of decreased activity of ACC which causes a subsequent decrease in malonyl-CoA concentrations. These decreased malonyl-CoA levels in turn prevent inhibition of CPT1, causing an ultimate increase in fatty acid oxidation.[14] Since heart and skeletal muscle cells have a low capacity for fatty acid synthesis, ACC may act purely as a regulatory enzyme in these cells.

CPT1 is associated with type 2 diabetes and insulin resistance. Such diseases, along with many other health problems, cause free fatty acid (FFA) levels in humans to become elevated, fat to accumulate in skeletal muscle, and decreases the ability of muscles to oxidize fatty acids. CPT1 has been implicated in playing a critical role in these symptoms. The increased levels of malonyl-CoA caused by hyperglycemia and hyperinsulinemia inhibit CPT1, which causes a subsequent decrease in the transport of long chain fatty acids into muscle and heart mitochondria, decreasing fatty acid oxidation in such cells. The shunting of LCFAs away from mitochondria leads to the observed increase in FFA levels and the accumulation of fat in skeletal muscle.[17][18]

Its importance in fatty acid metabolism makes CPT1 a potentially useful enzyme to focus on in the development of treatments of many other metabolic disorders as well.