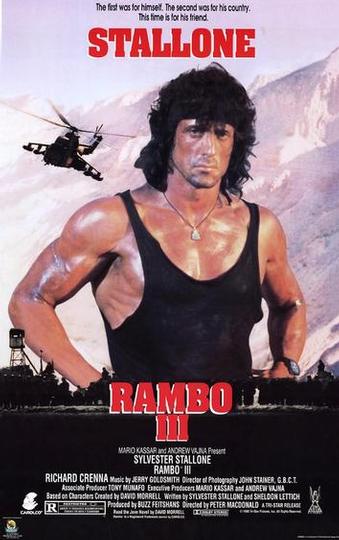 Taglines:
*"God would have mercy, John Rambo won't!"
*"The first was for himself. The second for his country. This time is for his friend."

The film opens with Colonel Samuel Trautman () returning to (where the second film took place) to once again enlist the help of veteran John J. Rambo (). After witnessing Rambo's victory in a stick-fighting match, Trautman visits the construction site of the temple Rambo is helping to build and asks Rambo to join him on a mission to . The mission is meant to supply weapons, including missiles, to Afghan freedom fighters, the , who are fighting the in the . Despite showing him photos of civilians suffering under Soviet military intervention, Rambo refuses and Trautman chooses to go on his own.

While in Afghanistan, Trautman's troops are ambushed by Soviet troops while passing through the mountains at night. Trautman is imprisoned in a Soviet base and coerced for information by Colonel Zaysen (Marc de Jonge) and his henchman Kourov (Randy Raney). Rambo learns of the incident from embassy field officer Robert Griggs () and convinces Griggs to take him through an unofficial operation, despite Grigg's warning that the U.S. government will deny any knowledge of his actions if killed or caught. Rambo immediately flies to Pakistan where he meets up with Mousa (Sasson Gabai), a weapons supplier who agrees to take him to a village deep in the Afghan desert, close to the Soviet base where Trautman is kept. The Mujahideen in the village are already hesitant to help Rambo in the first place, but are definitely convinced not to help him when their village is attacked by Soviet helicopters after one of Mousa's shop assistants has informed the Soviets of Rambo's presence. Aided only by Mousa and a young boy named Hamid (Doudi Shoua), Rambo makes his way to the Soviet base and starts his attempts to free Trautman. The first attempt is unsuccessful and results not only in Hamid getting shot in the leg, but also in Rambo himself getting shot in the stomach. After escaping from the base, Rambo tends to Hamid's wounds and sends him and Mousa away to safety.

The next day, Rambo returns to the base once again, just in time to rescue Trautman from being tortured with a blow-torch. After rescuing several other prisoners, Rambo steals a helicopter and escapes from the base. However, the helicopter soon crashes and Rambo and Trautman are forced to continue on foot. After a confrontation in a cave, where Rambo and Trautman kill several Russian soldiers including Kourov, they are confronted by an entire army of Russian tanks, headed by Zaysen. Just as they are about to be overwhelmed by the might of the Soviet Army, the Mujahideen warriors, together with Mousa and Hamid, ride onto the battlefield by the hundreds in an thunderously awe-inspiring cavalry charge, overwhelming the Communists. In the ensuing battle, in which both Trautman and John are wounded, Rambo manages to kill Zaysen by driving a tank into the helicopter Zaysen is flying in. At the end of the battle Rambo and Trautman say goodbye to their Mujahideen friends, and leave Afghanistan to go home.

, author of "First Blood", the novel the first Rambo film is based on, wrote a . The film is dedicated to "the gallant people of Afghanistan."

The film's domestic box office gross was $53,715,611, which was about $11 million lower than its overall budget. However, it received a large worldwide gross of $189,015,611, or $135,300,000 internationally, excluding revenue from video rentals. Some critics note that the timing of the movie, with its unabashedly anti-Soviet tone, ran afoul of the opening of communism to the West under , which had already changed the image of the Soviet Union to a substantial degree by the time the movie was finished. [ [http://www.exile.ru/articles/detail.php?ARTICLE_ID=10145&IBLOCK_ID=35 Preview Review: Rambo IV] ]

According to the 1990 , "'Rambo III" is the most violent film with 221 acts of violence, at least 70 explosions, and over 108 characters killed on-screen. However, the body count of the fourth Rambo movie surpassed the record. In comparison, "Rambo" holds the record with the most kills out of the entire "Rambo" series, with 236 kills and an average of 3.2 kills per minute.

The Mi-24 Hind-D helicopters seen in the film are in fact modified Aérospatiale SA 330 Puma transport helicopters with fabricated bolt-on wings similar to the real Hind-Ds which were mainly used in the former Soviet bloc nations. The other helicopter depicted is a slightly reshaped .

An extensive film score was written by Oscar-winning American composer ; however, much of it was not used. Instead, much of the music Goldsmith penned for was recycled. The original CD/LP contained only a portion of the new music. A more complete 75-minute version of the score was released years later.

According to a report by the CBC's The Fifth Estate, trip wires were used to bring down the horses, causing some controversies of animal cruelty. [ [http://www.cbc.ca/fifth/cruelcamera/cruelty.html Cruelty to Animals in the Entertainment Business : Cruel Camera - Cruelty on Film : the fifth estate : CBC News ] ]