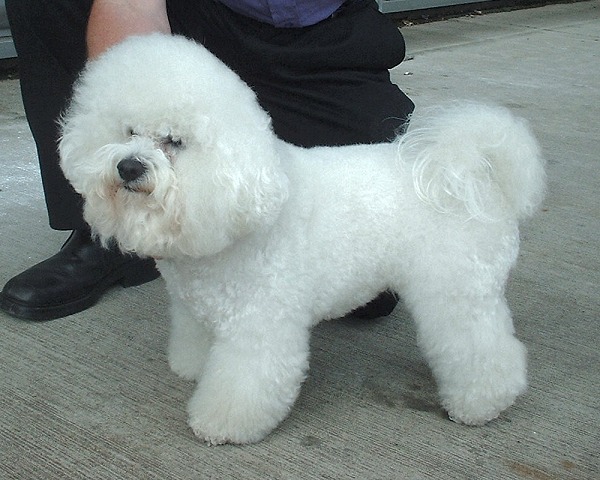 A Bichon Frisé (French, literally meaning "curly lap dog") is a small breed of of the Bichon type. They are popular pets, similar in appearance to, but larger than, the Maltese. They are a non-shedding breed that requires daily grooming.

The Bichon Frisé is a small but sturdy dog that weighs 3-5 kg/7-12 lbs and stands 23-30 cm/9-12in. at the withers. It has a black nose and dark eyes, and its white coat consists of a curly outercoat and a silky undercoat. A small amount of buff or cream color may be seen around its ears or on its body. The head and legs are proportionate in size to the body, and ears and tail are natural (not "docked" or "cropped".) [ [http://www.fci.be/uploaded_files/215gb98_en.doc Fédération Cynologique Internationale breed standard] ] Often the coat is trimmed to make the fur seem even in length.

The well-bred Bichon Frisé is gentle mannered, feisty, sensitive, playful, and affectionate. A cheerful attitude is a prominent personality trait. Most Bichon Frisés enjoy socializing with people and most dogs. Bichon Frisés may be relatively stubborn, but are also said to be patient. They may tend to nip gently in play. They may have sudden bursts of energy resulting in the "blitz" or "buzz", where they race around in circles until they collapse happily onto their backs. They are great around children and also good watch dogs. They tend to be very friendly towards people even outside of the immediate family.

Bichon Frisés can also be hard to house train. A crate is usually the best method of training. The puppy should come to see his/her crate as his personal space so avoid using it as discipline for bad behaviour to maximise house training potential. Do not use house breaking pads because the dog will tend to see rugs in the same way that she/he sees the house breaking pads. Train the dog to use a specified area outside, preferably on an area that is stone.

Because Bichon Frisés do not shed, they are suitable for many people with allergies; however human sensitivity to dog fur varies considerably. People with dog allergies should first visit with a Bichon to test their individual reaction before committing to ownership.

Like most non-shedding dogs, Bichon Frisés are high-maintenance. They require regular grooming, which can be expensive and/or time-consuming. If their hair isn't brushed, it will get matted and tangled. An alternative to the high maintenance Bichon Frisé cut is a shorter puppy cut, which when done properly can eliminate daily grooming. Short Bichon puppy cuts do require trips to the groomer every six to eight weeks.

Because Bichon Frisés are so susceptible to skin problems and allergies, good grooming practices are very important. Bichon Frisés should be professionally groomed at least once every three months.

Bichon Frisés being shown in conformation have their coat styled in the full-volume cut required by most show standards. Bichon Frisés not being shown are more often kept in a "puppy cut," which is shorter and requires less maintenance.

Like all dogs that require frequent , Bichon Frisés should be accustomed to grooming from a young age and care should be taken to keep grooming pleasurable. Daily grooming prevents tangles and creates a puffier coat. To prevent matting, the coat should be kept clean, brushed thoroughly before bathing, and brushed and completely dried after bathing. This has little to no shedding (see )."

The hair on the face of a Bichon Frisé should be kept clean and trimmed, as eye discharge and mucus tend to accumulate in the hair that grows in front of their eyes. In common with most white dogs Bichon Frisés are prone to tear-staining around the eyes. Tear staining may be caused by allergies, infections, blocked tear ducts, stray eyelashes, or foreign material in the eyes.

Although Bichon Frisés are often considered a "hypoallergenic" breed for people prone to dog allergies, Bichon Frisés themselves are unusually prone to allergies. Between a quarter and half of Bichon Frisés (depending on the particular survey) in USA/Canada surveys have skin problems and allergies, including atopy (inhalant allergies).

Bichon Frisés, like many other dogs with fluffy, flappy ears are prone to ear mites and usually need constant care around the ears.

Mortality (Longevity and Causes of Death)

The oldest Bichon Frisés for which there are reliable records in various USA/Canada surveys have died at 19 years. In August 2008, a Bichon Frisé from Illinois named Max died at the age of 20 years and 3 months.

In a 2004 UK Kennel Club survey, the leading causes of Bichon Frisé death were old age (23.5%) and cancer (21%). In a 2007 USA/Canada breeders survey, the leading causes of death were cancer (22%), unknown causes (14%), hematologic (11%), and old age (10%). Hematologic causes of death were divided between autoimmune hemolytic anemia (AIHA) and immune-mediated (ITP). AIHA and ITP were responsible for the greatest amount of Bichon Frisé "years lost." "Years lost" is a measure of the extent to which a condition kills members of a breed prematurely. While cancer is a more common cause of death than AIHA/ITP, Bichon Frisés that died of cancer died at a median age of 12.5 years. Hematologic deaths occurred at a median age of only 5 years. Bichon Frisés in the UK survey had a lower rate of hematologic deaths (3%) than in the USA/Canada survey (11%).

Because of their merry disposition, they traveled much and were often used as by sailors as they moved from continent to continent. The dogs found early success in and it is generally felt that Spanish seamen introduced the breed to the of . In the 1300s, Italian sailors rediscovered the little dogs on their voyages and are credited with returning them to the continent, where they became great favorites of Italian nobility. Often, as was the style of the day with dogs in the courts, they were cut "lion style," like a modern-day .

The Bichon went to sea as a working Spanish boat dog. They were perfect for a boat because they do not shed, don't need a lot of exercise, and are fine companions, as well as obedient and easily trained. Though not considered a retriever or water dog, the Bichon, due to its ancestry, has an affinity for and enjoys water and retrieving. On the boats however, the dog's job was to meet and greet people with great enthusiasm. Their purpose was to make weary people smile and feel at ease, but most of all to cause these people to like the Spanish. It is one of the few dogs that has eyes like a human, that it shows the whites of its eye as well as expressions of happiness in them. The Bichons were the little happy ambassadors for the Spanish at every new port of call.

The "Tenerife", or "Bichon", had success in during the under Francis I (1515-47), but its popularity skyrocketed in the court of Henry III (1574-89). The breed also enjoyed considerable success in Spain as a favorite of the s, and painters of the Spanish school often included them in their works. For example, the famous artist, , included a Bichon in several of his works.

Interest in the breed was renewed during the rule of , but then waned until the late 1800s when it became the "common dog", running the streets, accompanying the organ grinders of Barbary, leading the blind and doing tricks in circuses and fairs. Even though the Bichon Frisé is no longer known as a common dog, when you go to a circus if any of the acts contain a dog it's very likely to be a Bichon due to its high ability to learn.

On , , the official standard of the breed was adopted by the . As the breed was known by two names at that time, "Tenerife" and "Bichon", the president of the International Canine Federation proposed a name based on the characteristics that the dogs presented - the Bichon Frisé. ("Frisé" refers to the dog's soft, curly hair.) On , , the Bichon Frisé was admitted to the of the .

The Bichon was popularised in in the mid 1960s, largely thanks to the Channel Nine mini-series , starring alongside his pet Bichon, Molly. The show ran for one season only, however it gained a cult following. In subsequent years Bichon ownership, especially in the Eastern states, climbed dramatically.

The first US-born Bichon litter was whelped in 1956. In 1959 and 1960, two breeders in different parts of the USA acquired Bichons, which provided the origins for the breed's development in the USA.

The serial killer in 'The Silence of the Lambs' has a Bichon Frisé.