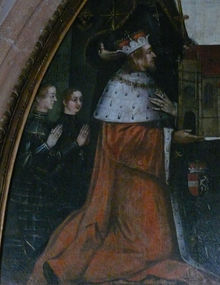 Duke Otto and his two sons.

Otto was born in Vienna. He had two brothers, namely Frederick the Handsome and Albert II. From 1330 onwards, he ruled jointly with Albert.

After the death of Henry of Carinthia, Emperor Louis the Bavarian gave Carinthia and the southern part of the Tyrol as an imperial fief on May 2, 1335, in Linz. Otto was enthroned as duke in accordance with the old Carinthian rite on the Zollfeld, and, from that time onwards, took care of Carinthia rather than of the Duchy of Austria. He founded the Neuberg Abbey at Neuberg an der Mürz in Styria and the Chapel of Saint George in the Augustine Church in Vienna. In February of 1335, he married Anna, the sister of Emperor Charles IV in Znojmo. In 1337 he founded the knightly order Societas Templois for the crusade against the pagan Prussians and Lithuanians. His nickname the Merry refers to the festive life at his court.

Otto died at Neuberg an der Mürz in 1339. His son and titular successor was Leopold II, Duke of Austria; however, Leopold died before coming of age, and the line became extinct.

On 15 May 1325, Otto married his first wife Elizabeth of Bavaria. She was a daughter of Stephen I, Duke of Bavaria and Jutta of Schweidnitz. They had two children:

Elizabeth of Bavaria died on 25 March 1330. Otto remained a widower for almost five years. On 16 February 1335, Otto married his second wife Anna of Bohemia. She was a daughter of John I of Bohemia and his first wife Elisabeth of Bohemia (1292–1330). They would have no children. She died on 3 September 1338.

Otto had four illegitimate sons who appear in genealogies. The identities of their mother or mothers and their later fates are unknown: