St Marylebone Parish Church is a church in London, from which Marylebone gets its name.

The first church for the parish (then including Tyburn) was built in the vicinity of the present Marble Arch c.1200, and dedicated to St John the Evangelist. 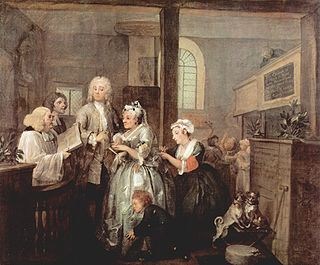 The marriage scene from "The Rake's Progress", showing the interior of the second St Marylebone

In 1400 this was demolished and a new church (dedicated to "St Mary the Virgin, by the bourne" - the Ty bourne was a stream running from what is now Regent's Park down to the Thames - later corrupted to St Mary le burn and finally to St Marylebone) built closer to the village of Marylebone, on the site of the memorial garden at the north end of Marylebone High Street. In this church Francis Bacon was married in 1606, and its interior was portrayed by William Hogarth in the marriage scene from his famous series "A Rake's Progress" (1735). By 1722, its congregation was so large it needed a chapel of ease in the form of the Marybone Chapel.

A new, small church was built on the same site in 1740. Charles Wesley lived and worked in the area and sent for this church's rector John Harley and told him "Sir, whatever the world may say of me, I have lived, and I die, a member of the Church of England. I pray you to bury me in your churchyard."[citation needed] On his death, his body was carried to the church by eight clergymen of the Church of England and a memorial stone to him stands in the gardens in the High Street, close to his burial spot. One of his sons, Samuel, was later organist of the present church.

Also in this phase of the church Lord Byron was baptised (in 1788), Nelson's daughter Horatia was baptised (Nelson was a worshipper here), and Richard Brinsley Sheridan was married to Elizabeth Ann Linley. This is also the Church in which Diplomat Sir William Hamilton married Emma Hart (Amy Lyon), later the lover of Admiral Horatio Nelson

Construction of a new church was first considered in 1770, with plans prepared by Sir William Chambers and leadership given by the 3rd and 4th Dukes of Portland (owners of much of the area, by now a wealthy residential area to the west of London that had outgrown the previous church), but the scheme was abandoned and the land donated for it in Paddington Street purchased for a burial ground. In 1810-11 the present site was secured, plans made up by Chambers's pupil Thomas Hardwick and the foundation stone laid on 5 July 1813. Originally only intended as a Chapel of Ease, it was during construction decided to enlarge the building into the Parish Church, with the addition of the present tower and a wider front with Corinthian columns. A vaulted crypt (the parish burial ground until being bricked up in 1853, and since 1987 - after reinterment of its 850 coffins at Brookwood Cemetery in Surrey - a Healing and Counselling Centre) extended under the whole church, with extensive catacombs under the west side, and a double gallery ran round the entire church. In the south corners were two rooms fitted with fireplaces which served as family pews, and other church furniture included a large pulpit and reading desk and high box pews. At an overall cost of £80,000, the church was completed in 1817.

Behind the altar hung an oil painting of the Holy Family by Benjamin West (1738–1820), a local resident, below the organ case and console and the choir loft. The painting and some marble tablets were scraped and cut by a madman in 1859. Another resident was Charles Dickens (1812–1870), in Devonshire Terrace, whose son was baptised in this church (a ceremony fictionalised in "Dombey and Son"). Robert Browning and Elizabeth Barrett were married in this phase of the church in 1846 (their marriage certificate is preserved in the church archives). The church was also used in location filming for the 1957 movie recounting their story, The Barretts of Wimpole Street.[1]

In 1882 the energetic new Rector, the Revd W. Barker led the parish council to extensively redevelop the church, to (in Barker's words) "bring it more into harmony with the arrangements and decorations suited to the religious demands of the present day". The new plans, by Thomas Harris (architect and churchwarden of the parish), removed the end wall and the upper galleries along the sides of the church (uncovering the windows' full length and letting in more light), created a chancel for a robed choir (with new carved mahogany choir stalls with angel ends) and a sanctuary within the new apse, and added a marble mosaic floor, a fine marble pulpit and two balustrades (with Alpha and Omega on the latter). This new scheme combined Neo-Classicism with Pre-Raphaelitism, and included a gilded cross in the ceiling above the site of the original altar. Funded by subscription, it began in 1884 (with a memorial stone, laid by Mrs Gladstone, wife of the Prime Minister, in the outside wall of the apse) and was completed a year later.

A bomb fell in the churchyard close by during the second world war, blowing out out all the windows, piercing the ceiling over the reredos in two places with pieces of iron railing from the school playground and necessitating the church's closure for repairs until 1949, when fragments of the original coloured glass incorporated in the new windows and a Browning Chapel created at the back of the church to commemorate the Browning's marriage here. This chapel later became a parish room known as the Browning Room, with the chapel transferred to the side of the church as the Holy Family Chapel. This Room did contain several items of Browning furniture which have since largely been stolen.

The church contains a four manual organ by Rieger Orgelbau. A specification of the organ can be found on the National Pipe Organ Register.