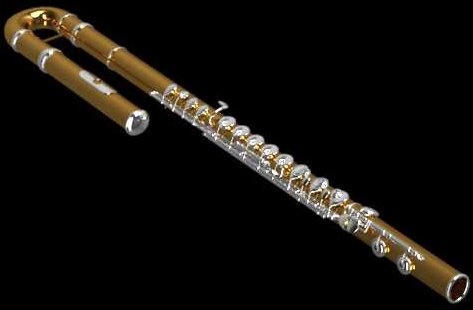 The alto flute is a type of , a in the family. It is the next extension downward of the C flute after the . It is characterized by its distinct, mellow tone in the lower portion of its range.

The tube of the alto flute is considerably thicker and longer than a C flute and requires more breath from the player. [ [http://www.markshep.com/flute/Finding.html Finding Your Flute (How to Choose, Rent, Buy a New or Used Flute) ] ] However, this gives it a greater dynamic presence in the bottom octave and a half of its range.

Said to be popularized by , it is pitched in the key of G (sounding a 4th lower than written). [ [http://www.michlinmusic.com/audio.html MichlinMusic.com - Audio Archives ] ] Its range is from G3 (the G below middle C) to G6 (4 ledger lines above the treble clef staff) plus an altissimo register stretching to Db8. The headjoint may be straight or curved.

Both have Boehm-system keywork (in fact, the modern alto flute was developed by Boehm), and the fact that they are transposing instruments means that a flautist doesn't need to learn a new set of fingerings for each instrument. [ [http://cnx.org/content/m12603/latest/ Flutes ] ]

In addition to being used in various flute choirs and concert ensembles, alto flutes are also popular in many groups. It is considered a doubling instrument for saxophonists (). [ [http://www.jazzeddie.f2s.com/jazz_flute.htm Jazz Flute & Flautists ] ] It is a instrument which allows the changing of note without adjusting the keys.

In the classical literature, the alto flute is particularly associated with the scores of and , both of whom used the colouring effect of the instrument in a variety of places. It is featured in Ravel's "", Stravinsky's "", 's "Cyrano de Bergerac", 's "" and Shostakovich used it in his operas "The Gamblers" (incomplete), "", "" and only in his "Symphony No. 7 (Leningrad)", for example, and in several movements of 's "".

It is also used by in "The Lord of the Rings" and many contemporary s.

British music that uses this instrument often refers to it as a , which can be confusing since there is a distinct instrument known by that name. [ [http://www.markshep.com/flute/Finding.html Finding Your Flute (How to Choose, Rent, Buy a New or Used Flute) ] ]

Depicted above is the 'curved head' version, frequently preferred by smaller players because it requires less of a stretch for the arms, and makes the instrument feel lighter by moving the centre of gravity nearer to the player. The straight version is the one more commonly preferred for comfort and for acoustical reasons. An Alto Flute may be supplied with either a straight or curved head. [ [http://palouke.home.comcast.net/~palouke/ArtBigFlutes.htm Phyllis Louke - Article: Getting Started Playing Alto, Bass and Contrabass Flutes ] ]

The embouchure for alto flute is similar to that for C flute, but in proportion to the size of the instrument. Hence the embouchure-hole sits lower on the lower lip, and the lip-aperture is wider.