Club Nacional de Football is a Uruguayan sports club based in Montevideo. It is best known for its professional football team, which plays in the Uruguayan Primera División.

Nacional is one of the most successful teams in Uruguay.[1] They have won the championship 43 times, including 32 in the professional era. Internationally, they have won the Copa Libertadores three times, ranking them fifth overall. As of today, Nacional is the team that leads Copa Libertadores' points table, having accumulated 515.[2] Nacional has also won the Intercontinental Cup three times, a joint record they share with Boca Juniors, Peñarol, Milan, and Real Madrid.

Nacional was founded on May 14, 1899 as the result of an alliance between Uruguay Athletic and Montevideo Football Club. The club has a strong rivalry with cross-town club Peñarol. Matches between them are known as the Clásico del fútbol uruguayo. The team plays their home games at the Estadio Gran Parque Central stadium, the home of the first ever FIFA World Cup match on July 13, 1930, when the USA beat Belgium 3–0.

Nacional was founded as the first "criollo" football side in Uruguay, being the first club that was not founded or controlled by British or other foreigners. Its players started developing already around 1900 a new playing style that introduced a less physical and more imaginative game, made out of fast combinations and frequent dribblings. Magariños says: "The action of these teams [the British-Uruguayan teams, that is] was conducted according the purest and standardized virtues of British sport: positional play, long passes, furious shots, and strong physical play. The body was used as a weapon, both offensively and defensively. (...) Nacional, formed mainly by smaller and faster players (...) abandoned the physical confrontation that was allowed back then, and chose to play according to their own possibilities. They chose to perform dribblings, fast and short passing, very fast sprints, and a hectic activity in the pitch."[3]

After two very successful initial decades in the national league of Uruguay and at the regional level, Nacional became the foundation of Uruguay's first international success at the world level. In 1924, Nacional contributed the substantial structure and players for Uruguayan national representative that won the Summer Olympics in Paris. The starting lineup of Uruguay at that tournament was composed by seven Nacional players, including the five forwards (Urdinarán, Scarone, Petrone, Cea and Romano) the goalkeeper Mazali and the defender Arispe. Both José Nasazzi and José Leandro Andrade, other two of the usual starters, will eventually play for Nacional in the following years.

The same thing happened with the Uruguayan teams of 1928 and 1930, Olympic and world champions respectively, in which Nacional contributed the majority of players. As a matter of fact, Nacional is the only Uruguayan club that contributed players to every Uruguayan national team that won international tournaments.[4]

In 1925, due to the success of Uruguay and of Nacional players in the Olympics, Nacional was invited to make an extensive European tour, playing 38 matches over six months. During that tour, Nacional played against both national squads and professional club teams from 9 European countries. Nacional won 26 matches, tied 7, and lost 5. An estimate of about 800,000 tickets were sold during that tour.[5]

In 1927, Nacional made an American tour, with similar results to the ones obtained in the European adventure made two years before.

The international reputation of Nacional was formed in tournaments played in the first half of the twentieth century in the Río de la Plata region, where the most important international tournaments in America were played before the Copa Libertadores was created. The historical rivalries with long time enemy Peñarol and famous Argentinian teams like Boca Juniors, C.A. River Plate, Racing Club, Independiente, San Lorenzo, Rosario Central and Newell's Old Boys, among others, were established in the Copa Río de la Plata, and the Copa de Honor and the Copa de Competencia.

Nacional repeated its achievement in the Copa Libertadores in 1980, beating Internacional from Brazil in the final, in a Estadio Centenario packed with Nacional fans. After becoming South American champions, Nacional won the Intercontinental Cup for the second time, defeating European champions Nottingham Forest from England 1–0, with goal from forward Waldemar Victorino.

Nacional won its third copa Libertadores in 1988, beating Argentine side Newell's Old Boys 3–0 in the Estadio Centenario, with goals from Vargas, De León and Ostolaza. That same year, Nacional would contest its third Intercontinental Cup. In a breath-taking final against Dutch side PSV Eindhoven coached by Guus Hiddink, Nacional would win in the penalty shootout after the game ended 2–2. "El Bolso" remains as the only team to win all the Intercontinental finals it participated in. In the next year, Nacional won its second Interamerican Cup, this time beating C.D. Olimpia.

In 1989, Nacional won the Recopa Sudamericana, defeating Racing from Argentina. 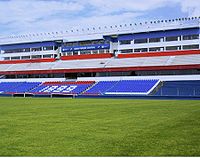 Nacional plays most home games at its own stadium, the 25,000 (and growing)[6] capacity Gran Parque Central (soon to be 30,000), built in 1900. This is the stadium where the first match of the first FIFA World Cup was played (United States-Belgium), on July 13th, 1930. In recent decades the stadium has not been used very often because Nacional played at the national stadium Estadio Centenario, sharing it with Peñarol. High-risk matches and derbies are still played at the Centenario. In 2005, the renovation of Parque Central allowed Nacional to play home matches there more often. 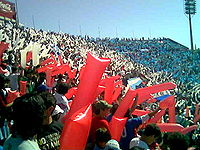 The Spanish word to describe football fans is "hincha", and it was coined by Nacional fans. An employee of Nacional of the early 1900s, Prudencio Miguel Reyes, was famous for his continuous support to the team. The other fans that attended the games started to call him by one of his duties: pumping air to the balls (in Spanish: "inflar" the balls, in Uruguay: "hinchar" the balls). Within a few games, Reyes was known as the "hincha" of Nacional. This is the origin of a word that is frequently used by Spanish speakers worldwide.[8][9]

Nacional is nicknamed “tricolores” (“three colours”), and “bolsilludos”, later shortened to “bolsos” (“bolsillo” being the Spanish word for pocket – Nacional used to play with a jersey that had a pocket on the chest). “La blanca” (The white) is less common also called the albos.

In 1903, Uruguay, fully represented by Nacional's team members beat Argentina 3–2, winning the first international match ever (of national teams) in the history of Uruguayan football (the first club match ever was won by Albion over Argentine team Retiro 3–1 in 1896 in Buenos Aires).

Below, the list of Nacional players that were part of Uruguay's Olympic and world champions teams.

Nacional participates in the tournaments organised by the Uruguayan basketball federation Federación Uruguaya de Basketball (known as FUBB) since 1932. The club won the championships of 1935 and 1937. Nowadays, Nacional takes part in the Torneo Metropolitano, Uruguayan basketball second division.

Nacional participates in the championships organised by the Uruguayan Cycling Federation Federación Ciclista del Uruguay since its beginnings. The club won the most important competitions in several occasions: Vuelta Ciclista del Uruguay and Rutas de América, individually and by teams. Nowadays, Nacional cycling team has the presence of Milton Wynants, winner of a silver medal for Uruguay in the 2000 Summer Olympics.

Nacional has a lot of tennis courts in Parque Central, behind the stand Talud Abdón Porte, in which several stages of the tournaments organised in Uruguay are disputed. In 2005, the club had the honour of holding various games played by Uruguay in the American Zone II of Davis Cup.

Nacional has its volleyball court in Parque Central, in the gymnasium of Jaime Cibils street. In that stadium, the club plays its home games of the championships organised by the Uruguayan volleyball federation Federación Uruguaya de Vóleibol in every category.

Nacional was part of the tournaments organised by the Department of Femenine Football of the Uruguayan Football Association, since its establishment in 1996. The club won various league titles and its main rival in Uruguay was Rampla Juniors. Internationally, Nacional played in various South American championships. The club dissaffiliated in 2005 and returned to the league in 2009 ending third in the annual standings.

Nacional participates in the championships organised by de Futsal Delegated Commission of the Uruguayan Football Association. The club won the Uruguayan league title in various occasions and is nowadays the Uruguayan champion. Internationally, Nacionals main achievement is the second place in the South American Futsal Cup Copa Libertadores de América de Futsal in 2003.