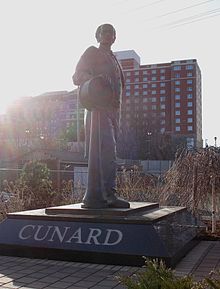 A statue of Sir Samuel Cunard in Halifax, Nova Scotia

Sir Samuel Cunard, 1st Baronet (21 November 1787 – 28 April 1865) was a British shipping magnate, born at Halifax, Nova Scotia, who founded the Cunard Line. He was the son of a master carpenter and timber merchant who had fled the American Revolution and settled in Halifax.[1]

Samuel Cunard was the son of Abraham Cunard who was originally from Germany and raised a Quaker and Margaret Murphy, who was raised as a Irish Catholic who were Loyalists to the British Crown who came to Halifax in 1783. Abraham Cunard was a master carpenter who worked for the British garrison in Halifax and became a wealthy landowner and timber merchant.[2] Cunard's business skills were evident at an early age and by age 17 he was managing his own general store. He later joined his father in the family timber business, which he expanded into coal, iron, shipping and whaling.

During the War of 1812, Cunard volunteered for service in the 2nd Battalion of the Halifax Regiment militia and rose to the rank of captain. He held many public offices such as lighthouse commissioner and maintained a reputation as not only a shrewd businessman but also an honest and generous citizen.

Cunard was a highly successful entrepreneur in Halifax shipping and one of a group of twelve individuals who dominated the affairs of Nova Scotia. Early investments in steam included co-founding the steam ferry company in Halifax harbour and an investment in the pioneering steamship Royal William. Cunard went to the United Kingdom, where he set up a company with several other businessmen to bid for the rights to run a transatlantic mail service between the UK and North America. It was successful in its bid, the company later becoming Cunard Steamships Limited.

In 1840 the company's first steamship, the Britannia, sailed from Liverpool to Halifax, Nova Scotia and on to Boston, Massachusetts, with Cunard and 63 other passengers on board, marking the beginning of regular passenger and cargo service. Establishing a long unblemished reputation for speed and safety, Cunard's company made ocean liners a success in the face of many potential rivals who lost ships and fortunes. The prosperous company eventually absorbed many others such as the Canadian Northern Steamships Limited, and its principal competition, the White Star Line, owners of the ill-fated Titanic. After that, Cunard dominated the Atlantic passenger trade with some of the world's most famous liners such as the RMS Queen Mary [3] and RMS Queen Elizabeth.[4] His name lives on today in the Cunard Line, now a prestigious branch of the Carnival Line cruise empire.[5]

Cunard owned a number of companies in Canada. His coal company, which he bought to fuel his liners, is still one of Nova Scotia's major fuel companies, although it is now owned by the Irving Family of New Brunswick. He also controlled logging ventures and at one point owned a seventh of Prince Edward Island.

In 1859 Cunard was created a baronet by Queen Victoria.

He was married to Susan, daughter of William Duffus (on 4 February 1815; she died 23 January 1828) by whom he had nine children. He was succeeded in the business and in the baronetcy by his son Sir Edward Cunard, 2nd baronet. Sir Samuel was the grandfather-in-law of the society hostess Emerald, Lady Cunard (wife of the third baronet), and the great-grandfather of Nancy Cunard.

Cunard throughout his personal life was not a religious man and was considered by many to be agnostic. His views on slavery in the 19th century were not known but his statements regarding Fredrick Douglass's segregated passage arranged by a Cunard Agent in Liverpool on one of his ocean liners in 1845 strongly suggests he was against any form of racial prejudice. "No one can regret more than I do the unpleasant circumstances surrounding Mr. Douglass's passage from Liverpool, but I can assure you that nothing of the kind will again take place on the steamships in which I am connected." His views on race reflected those of those Britons of the time who regarded mistreatment of the Negro as a moral wrong even though Negros were still considered to be socially and intellectually inferior to Caucasian people.

Sir Samuel Cunard died at Kensington and is buried there in Brompton Cemetery.

At the Maritime Museum of the Atlantic in Halifax, a substantial portion of the second floor is dedicated to his life and his world-famous shipping line. A large statue of Cunard was erected on the Halifax waterfront in 2006.