Frisia[1] is a coastal region along the southeastern corner of the North Sea, i.e. the German Bight. Frisia is the traditional homeland of the Frisians, a Germanic people who speak Frisian, a language group closely related to the English language. Frisia extends from the northwestern Netherlands across northwestern Germany to the border of Denmark (Vidå).

The three groups of the Frisian Islands (the West, East and North Frisian Islands) stretch more or less correspondingly along these three sections of the German Bight coast.

West Frisia corresponds roughly to the Dutch province of Friesland (Fryslân), the northern part of North Holland province (the historical region of West Friesland, the westernmost portion of the traditional region of West Frisia), and also modern Groningen province, though the Western Frisian language is only spoken in Friesland proper. Dialects with strong Frisian substrates, including Low German and Low Franconian, are also spoken in West Frisia. In the northern province of Groningen, people speak Gronings, a Low Saxon dialect with a strong Frisian substrate.

East Frisia includes areas located in the northwest of the German state of Lower Saxony, including the districts of Aurich, Leer, Wittmund and Friesland, as well as the urban districts of Emden and Wilhelmshaven, the Saterland, the Land Wursten and former Rüstringen (Butjadingen). East Frisia is also the name of a historical county in that area. The German name "Ostfriesland" distinguishes the former county from "Ost-Friesland", which means the whole eastern Frisian area.

A half-million Frisians in the province of Friesland in the Netherlands speak West Frisian. Several thousand people in Nordfriesland and Heligoland in Germany speak a collection of North Frisian dialects that are often unintelligible to each other. A small number Saterland Frisian language speakers live in four villages in Lower Saxony, in the Saterland region of Cloppenburg county, just beyond the boundaries of traditional East Frisia. Many Frisians speak Low Saxon dialects, especially in East Frisia, but also in West and North Frisia.

Frisia has changed dramatically over time, both through floods and through a change in identity. It is part of the Nordwestblock which is a hypothetical historic region linked by language and culture.

The Frisii began settling in Frisia around 500 BC. According to Pliny the Elder, in Roman times, the Frisians (or their close neighbours, the Chauci) lived on terps, man-made hills.[2] According to other sources, the Frisians lived along a broader expanse of the North Sea (or "Frisian Sea") coast.[3]

Frisia at this time comprised the present provinces of Friesland and North Holland. 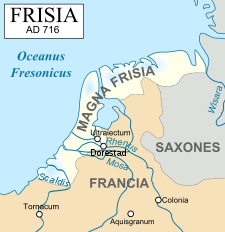 The Frisian Realm during its great expansion

In the 7th and 8th centuries, the Frankish chronologies mention the northern Low Countries as the kingdom of the Frisians. However, these were probably not the Frisians of Roman times. This kingdom comprised the coastal seelande provinces of the Netherlands, from the Scheldt to the Weser and the German North Sea coast eastwards beyond. During this time, the Frisian language was spoken along the entire southern North Sea coast[citation needed] and, today, this region is sometimes referred to as Greater Frisia or Frisia Magna.

Distant authors seem to have made little distinction between Frisian and Saxon. The Byzantine Procopius described three peoples living in Britain: Angles, Frisians and Britons,[4] and the Danish author of Knútsdrápa celebrating the 11th-century Canute the Great used 'Frisians' as a synonym of 'English'.[5] To account for East Anglia's distinct land-holdings in carucates forming vills assembled in leets, partible inheritance patterns of lands held in common among a kinship, resistance to manorialization and other social institutions, a case has been made for Frisian cultural domination there from the fifth century.[6] East Anglian sources called the inhabitants of 'Frisia' Warnii instead of Frisians.

The earliest Frisian records name four social classes, the ethelings (nobiles in Latin documents) and frilings, who together made up the "Free Frisians" who might bring suit at court, and the laten or liten with the slaves, who were absorbed into the laten during the Early Middle Ages, as slavery was not so much formally abolished, as evaporated.[7] The laten were tenants of lands they did not own and might be tied to it in the manner of serfs, but in later times might buy their freedom.[8]

The basic land-holding unit, for assessment of taxes and military contributions, was the ploegg (cf. "plow") or teen (cf. "hundred"), though it passed under other local names. The teen was pledged to supply ten men for the heer, the army. Ploegg or teen formed a unit who were collectively responsible for the performance of any of the men. The ploegg or East Frisian rott was a compact holding that originated with a single lineage or kinship, whose men in early times went to war under their chief, and devolved in medieval times into a union of neighbors rather than kith and kin. Several, often three, ploeggs were grouped into a burar, whose members controlled and adjudicated the uses of pasurage (but not tillage) which the ploeggs held in common, and came to be in charge of roads, ditches and dikes. Twelve ploeggs made up a "long" hundred,[9] responsible for supplying a hundred armed men, four of which made a go (cf. Gau).

The 7th-century Frisian realm (650-734) under the kings Aldegisel and Redbad, had its centre of power in the city of Utrecht. Its ancient customary law was drawn up as the Lex Frisionum in the eighth century. Its end came in 734 at the Battle of the Boarn, when the Frisians were defeated by the Franks, who then conquered the western part up to the Lauwers. They conquered the area east of the Lauwers in 785, when Charlemagne defeated Widukind. The Carolingians laid Frisia under the rule of grewan, a title that has been loosely related to count in its early sense of "governor" rather than "feudal overlord".[10]

This Frisia Magna was partly occupied by Vikings in the 840s, until they were expelled between 885 and 920. It has also been suggested that the Vikings did not conquer Frisia, but settled in certain parts (such as the island of Wieringen), where they built simple forts and cooperated and traded with the native Frisians. One of their leaders was Rorik of Dorestad.

Frisians made polders in West Friesland, which became more and more separated from Friesland due to floods. After a few centuries of increasingly divergent history, the western part of Frisia became the county of Holland in 1101, Frisia began to identify itself as a country with free folk in the Middle Ages. Frisia no longer belonged to the bishopric of Utrecht. There were many floods in the 11th and 12th centuries, which led to the deaths of many and eventually formed the Zuider Zee. The largest flood occurred in 1322.

The free Frisians (actually petty noblemen) and the city of Groningen founded the Opstalboom League to counter feudalism. The league consisted of modern Friesland, Groningen, East Frisia and the German North Sea coast, and parts of the Danish North Sea coast (Schleswig). But the Opstalboom league did not consist only of Frisians, as the area of Zevenwouden and the city of Groningen were Saxon. Some Frisians lived under the rule of the counts of Holland in West Friesland. The Opstalboom League was short-lived; it collapsed after a few years because of continual internal strife. 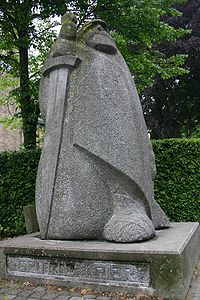 Statue of Pier Gerlofs Donia, known for his legendary strength and size

The 15th century saw the end of the free Frisians. The city of Groningen started to dominate Groningen. A petty nobleman in East Frisia managed to defeat the other petty noblemen and became count of East Frisia. The Archbishop of Bremen-Hamburg and the king of Denmark conquered large areas of Frisia. Only Friesland remained for the Frisian Freedom. Friesland was conquered in the 1490s by Duke Albert of Saxony-Meissen.

Later, the giant Pier Gerlofs Donia (Grutte Pier) would fight for his country's freedom. He had many successes, but ultimately failed to secure Frisia's independence. He died as a farmer in 1520. A statue dedicated to him is displayed to the right. He is estimated to have been seven feet tall.

Although the Frisian regions have their own separate flags, Frisia has not historically had a flag of its own. The flag for united Frisia, known as the Inter-Frisian Flag (Ynterfryske Flagge), was launched in September 2006 by the Groep fan Auwerk, which supports a united Frisia as a recognised country.

The flag is inspired by the Nordic Cross Flag. The four pompeblêden (water lily leaves) are derived from the seven pompeblêden on the (West) Friesland flag, but the number represents the three separate Frisian regions plus Groningen (Eastlauwersk Fryslân). The flag was not accepted by the Inter-Frisian Council.[11]

In November 2009, a Frisian edition of the national Bosatlas, De Bosatlas van Fryslân was published by the Dutch publisher Noordhoff in Groningen, almost 500 pages and 4 kg. This Bosatlas van Fryslân is completely dedicated to the Dutch province of Friesland, with historical and modern maps, aerophotography and background information on hundreds of topics. It also contains a complete set of topographical maps, in the most detailed scale (1:25 000).[12][13]