The Yokosuka P1Y Ginga (銀河, "Galaxy") was a twin-engine, land-based bomber developed for the Japanese Imperial Navy in World War II. It was the successor to the Mitsubishi G4M and given the Allied reporting name "Frances".

The P1Y was designed by the Yokosuka Naval Air Technical Arsenal to Navy specification 15-Shi,[2] calling for a fast bomber with speed matching the Zero, range matching the G4M, a 907 kg (2,000 lb) bombload, and the ability to dive-bomb as well as carry torpedoes. As the result, the construction suffered from excess complexity, difficulty of manufacture, and poor serviceability. Problems with the availability of enough reliable Nakajima Homare engines led to their replacement by the Mitsubishi Kasei in the P1Y2-S night-fighter version.

The streamlined design of the Ginga is attributed to Miki Tadanao, an engineer who, after World War II, went on to create a similar aerodynamic design for Japan's earliest `bullet trains` (Shinkansen), while working with the Japan National Railways(JNR).[3]

The first flight was in August 1943. Nakajima manufactured 1,002 examples, which were operated by five Kokutais (Air Groups), and acted as land-based medium and torpedo bombers from airfields in China, Taiwan, Marianas, Philippines, Ryukyu, Shikoku, and Kyūshū. During the last stages of the war the P1Y was utilized as a kamikaze aircraft against the United States Navy during the Okinawa Campaign in Operation Tan No. 2.

A night fighter version, the P1Y2-S Kyokko (極光, "Aurora"), with Mitsubishi Kasei engines, was equipped with radar and Schräge Musik-style upward-firing -- as well as forward-firing -- 20 mm cannon. A total of 96 were produced by Kawanishi,[5] but due to inadequate high-altitude performance against B-29s, many were converted back to Ginga bombers.[6] 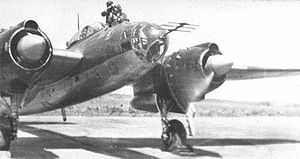 Version P1Y1a/P1Y2a, since it has a single forward cannon, and no dorsal turret

Data from Japanese Aircraft of the Pacific War[8]