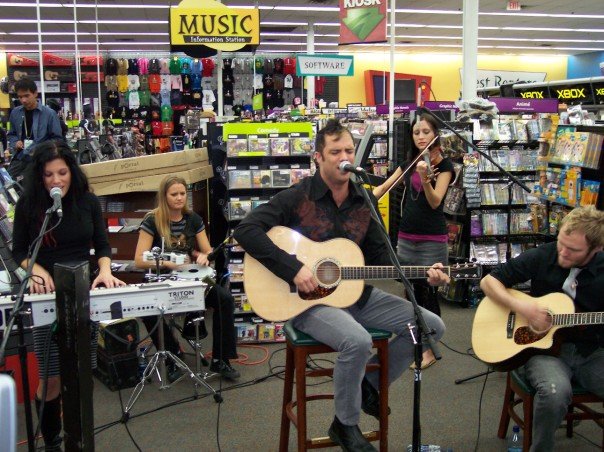 Skillet formed as a band in 1996 with two members: John Cooper, former bassist and vocalist for Seraph, and Ken Steorts, the guitarist for Urgent Cry. Befriending through touring together, they released a split EP with both bands contributing four songs each. Urgent Cry and Seraph disbanded soon after, and John and Ken's pastor encouraged them to start their own band. [http://www.youtube.com/watch?v=16a1p_gN0WA] Coming from different styles of rock music, the two decided to name the band Skillet, since it was like "throwing it all in a Skillet, and see what you come up with".Fact|Skillet (band)|date=May 2007. Soon after, Trey McClurkin joined the band as a temporary drummer. Skillet had only been together for one month before they received interest from the major Christian record label .Fact|Skillet (band)|date=May 2007 In late 1996, they released a self-titled debut, "Skillet". The album did well and the trio continued to write new material as they toured the .

Skillet recorded their follow-up album throughout 1997, entitled "", which was released in April 1998. Their second effort was a change in style from the band's first release. With this release, Skillet would abandon their post-grunge approach for a lighter alternative rock that was more dependent on John's keyboarding. His wife Korey was enlisted soon after to play keyboards live in order to alleviate John's live performance duties.

Shortly before the band began recording for their third album, "Invincible", Steorts left the band to be with his family fact|date=March 2008, and Kevin Haaland joined the band as their new guitarist. Korey Cooper joined the band permanently and played keyboards for the recording of "Invincible". Because of this change, the musical style on "Invincible" changed to a more electronic sound.

The band released their first worship album, and fourth album overall, "" in fall of 2000. The band continued to use a sound similar to that on "Invincible" with their next album, "". With little time between touring and recording, Skillet released "Alien Youth" in 2001, which was the first album that John Cooper took on production duties. Before the release of "Alien Youth", Haaland left the band, and took over on guitar. The first single, the title track, was a major hit in the Christian market and drove Skillet into their first headlining shows.

In 2003, "Collide" was released by . It caught the attention of Andy Karp, the Head of A&R of Lava Records, and in 2004 the rights to "Collide" were bought by , a division of . On , , "Collide" was re-released under Lava Records, with an added track, "Open Wounds". "Collide" was yet another musical shift for the band.Citing and as inspiration for the musical shift on "Collide", Cooper said "Well I’m one of these song writers, everything I hear goes through my John Cooper filter of what I like and what I don’t like... all these things... have been an influence on me."

Skillet's next album was titled "Comatose" and was released on , . The album spawned the singles "Rebirthing," "Whispers In The Dark," "The Older I Get," "Those Nights," and "The Last Night". John Cooper said on their official website, "As soon as my feet hit the stage, I know no matter how many people are there I'm going to give it everything I've got. I'm going to do the best show I can do; the wildest show. I'm gonna rock it. I think we captured that feeling on our record." [ [http://www.skillet.org Official website] ]

In January 2008, Skillet announced that their drummer, Lori Peters, was retiring from the band, feeling that "it's time for her to come off of the road and start a new chapter in her life." Peters' last concert with Skillet was on , .

Skillet has also created a new single to add to the Comatose Deluxe Edition called "Live Free or Let Me Die."

On the Skillet fan boards it has been officially announced that Skillet will be returning to the studio in the fall to start work on their new album which will be released in the Spring of 09. A recent blog post by Ben Kasica stated that they had about 20 songs written for recording

Skillet will be releasing the "" CD/DVD Combo on October 21st of 2008 which is a Live recording of their May 9th 2008 show in Chattanooga Tennessee [http://www.skillet.com/news/cmt.html]

In the middle of 2006, Korey Cooper took a break from performing, due to her pregnancy with their second child. Her back-up guitar and keyboard role was temporarily filled by two people: Drea Winchell (who would later become the Cooper's nanny) on keys, and Chris Marvin on guitar.

Skillet teamed up with & on their Tour across the United States & Canada in 2007. When they returned Skillet teamed up with to co-headline the Justice & Mercy Tour, [http://www.killerbandphotos.com/2008/03/skillet-band-to.html Live Photos from That Tour] . That tour was postponed/canceled after a number of shows due to Flyleaf's lead singer, 's vocal problem. They will team up with Luce in his Global Expeditions program on a missions trip with teenage missionaries this summer on a trip to Mexico.

joined Skillet for a March 31 through May 20 tour.

Skillet headlined their own "Comatose" Tour alongside , and traveled to approximately 30 cities. The tour started on March 28th and ran through May 11th, 2008 - [http://www.killerbandphotos.com/2008/04/skillet-2008-co.html Live Photos from that Tour] . [ [http://www.ccmmagazine.com/news/headlines/11564490/ CCMMagazine.com, Skillet Announces Spring "Comatose" Tour] ]

Skillet frequents the Christian music festival entitled "" where many other Christian artists play alongside them, and played at the 2008 World Pulse Fest in South Bend, IN with stated intentions to return.

"Panheads" is a nickname given to fans of Skillet, since they are named after a pan. On the 2007-2008 WinterJam Tour, Skillet was quoted saying, "So you're probably wondering where the name comes from. We were named after a frying pan. No, no...here's the real story...we...were...named...after a frying pan." Former guitarist Ken Steorts once said, "There are three levels in 'Skillethood': those who don't know, those who become 'Skilletfanz' through hearing our music, and then 'Panheads' - those who come to three or four shows traveling up to 10 hours, bringing skillets, banners, writing on their cars, and so forth. Of course, we love them all, but we have a special place in our hearts for 'Panheads'." [ [http://lyrics.crossmap.com/artist/skillet.htm CrossMap Lyrics - Skillet Biography, Discography] ]