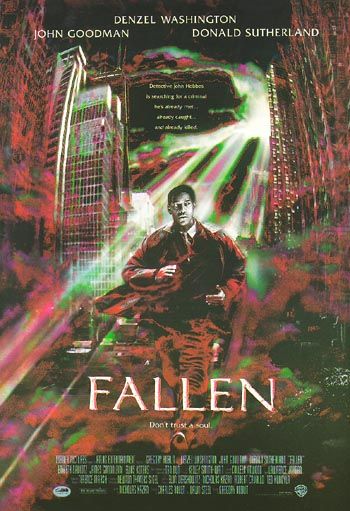 Police detective John Hobbes, played by , gains notoriety for capturing wily serial killer Edgar Reese. Immediately after Reese is executed, Hobbes is plunged into the case of a killer who seems to be copycatting Reese. Hobbes's investigation soon leads him to discover that this is no copycat, however; Reese -- or at least the evil that was inside him -- has managed to survive the execution, and is jumping from one body to another to continue killing, and to terrorize Hobbes himself. As the battle of wits between good and evil becomes increasingly personal for Hobbes, he must turn to a theologian's theories on demonology as his only hope for defeating the demon that was inside Reese.

The "serial killer" Hobbes is hunting is really the demon , who can possess humans simply by touching them. For example, Azazel taunts Hobbes by rapidly body-hopping between many people in crowded city streets, making it impossible to track its movements. Azazel can even possess animals, such as when it possesses a bird to spy on Hobbes through his window. For reasons unknown to perhaps even Azazel, Azazel could not possess Hobbes the first time he tried to (when Reese asked to shake his hand before his execution), and this coupled with Hobbes' investigation of the "serial killer" makes Azazel obsessed with tormenting Hobbes. This culminates in Azazel possessing Hobbes' mentally retarded brother and making him commit suicide.

Due to Azazel's ability to switch bodies, the villain is performed by a different actor in almost every scene (or sometimes by many actors in the same scene). Still, Azazel has several personality quirks which become apparent in each new host body he inhabits. The lyric "" is used as an ominous theme repeatedly sung by Azazel, as it is apparently his favorite song, and perhaps refers to how he has been tormenting humanity for thousands of years. Azazel is consistently left-handed, even when possessing a right-handed host-body. He is also very fond of Kellogg's Corn Flakes, and during pauses in his killing spree will stop to enjoy a bowl. As a demon, Azazel can also speak any human language, for example ranting in Dutch even while in a host body that has no knowledge of the language.

Hobbes tries to outright shoot Azazel while he is in a host body, only for Azazel to reveal that killing his host doesn't affect his spirit, and he can simply switch to another host-body in the area, without direct touch-contact. Hobbes' killing of one of Azazel's hosts results in Azazel framing Hobbes for murder, aided by the fact that he can take over the body of witnesses to make claims that Hobbes went on a shooting spree. From a hint Azazel taunts him with, Hobbes discovers that a previous police officer tried to stop another "serial killer" Azazel was possessing decades ago, but this culminated in his suicide. Hobbes contacts the dead police officer's daughter, who has become a theologist, to try to find a way to understand and defeat Azazel. By consulting several ancient texts for mention of Azazel, they discover that the apparently death-cheating no-contact body-hop Azazel performs when his host body dies actually has a finite range, a breadth of about a sixth of a mile.

Thus, Hobbes drives alone to a remote cabin owned by the police officer that killed himself deep in the woods, and waits for Azazel to come find him. When Azazel does arrive, he is possessing Hobbes' partner (who shoots their superior in the head). After a tense hide-and-seek chase around the cabin, Hobbes fatally shoots Azazel. As Hobbes' partner's body is dying, Azazel taunts him that he will simply body-hop into Hobbes after his host's body is dead. Hobbes counters by informing Azazel that the cigarette he is smoking is laced with a fatal dose of poison, and Hobbes’ body will die a matter of minutes after Azazel possesses him, at which point it will be impossible for Azazel to inhabit a new body, because the cabin is well outside the range at which he can possess a new body. Further, Hobbes takes the keys to both of their cars and throws them randomly far into the woods, so he won’t be able to get back to civilization in time. Azazel’s smug attitude turns to genuine fear, as Hobbes shoots his host body a second time in the head. Azazel possesses Hobbes’ body, and frantically tries to open his car, but to no avail, and Hobbes dies. Unfortunately, however, Azazel is still able to possess animals, and his spirit was able to possess a cat that lives under the house, and escape. Azazel assures the audience that his fight against humanity isn’t over.

The movie used no graphics to represent Azazel, but a yellow, blurry film add on was used to show the viewer that the camera was what Azazel is seeing.