Concord-Carlisle Regional High School is a public high school located in Concord, Massachusetts, USA, 17 miles (27 km) northwest of Boston. The school serves grades 9-12, and as part of the Concord-Carlisle Regional School District, has students from both Concord and Carlisle, Massachusetts. The school also has a notable portion of minority students from Boston (particularly Dorchester, Roxbury, and Mattapan) enrolled as part of the METCO program. Concord-Carlisle Regional High School is widely regarded as one of the top public high schools in the state, with the September 2009 issue of Boston Magazine rating CCHS the number one public high school in cost efficiency and 3rd in academic performance in eastern Massachusetts.[1]

Class subjects include the normal core subjects of English, Math, Science, and Social Studies, but a number of elective studies are offered as well, including programming, theatre, music, and photography.

In Social Studies or English, a broad course selection is offered. While CCHS by choice offers no AP classes in the humanities to allow for a more flexible curriculum, students may choose to take the AP tests. The English department offers classes on topics such as rhetoric and debate, American literature, British literature, contemporary literature, world literature, and black literature. The Social Studies department curriculum includes, among others, classes on Ancient Greece, Ancient Rome, and 20th century United States history, as well as psychology, economics, sociology, world religions, and Marxism.

Foreign languages offerings are not merely French and Spanish, but Latin and Chinese as well. Introductory Swahili is included within the syllabus of "History of Africa."

Educational experiences and trips to other countries include one to Edinburgh, Scotland in 2008, two to Prague in the Czech Republic, Salzburg and Vienna in Austria in 2001 and 2005, one trip which explored the entire length of Italy from north to south in 2003, and one trip to Spain in 2004, staying in Madrid, Sorrento, and Malaga. In 2008 and 2009, there were trips to Quito, Ecuador. In 2003, 2007, 2009 and 2010 there were trips to Hokkaido Japan for the Concert Band and the Sci Fi club. There have been trips to China, East Timor, and Estonia.

A staple of recognition, the school's campus has a one-of-a-kind attribute - a giant 30-foot (9.1 m) high purple crayon covering an exhaust pipe in the middle of the courtyard. Recently, an addition of double-rainbow sculpture has been added in the memorial of Richard Koch.

Extracurricular activities are strongly encouraged. CCHS has over 42 after-school activities that do not include sports. Many of the activities have been created and maintained by the students for many years. The school supports a political journal (The Third Wing), moot court, Spectrum: Gay/Straight Alliance, Dance Club, The Voice (newspaper), Reflections (a literary review), and high school radio station (WIQH 88.3 FM), among others. Concord-Carlisle also hosts local chapters of Model United Nations, Amnesty International, Academic Bowl and a Math Team.[2]

In 1998, 2004, 2007 and 2010 the Concert Band, led by Alfred Dentino, traveled to Japan in celebration of their national recognition for achievement and played with the Sapporo Shiroishi High School wind ensemble, which is currently ranked as the 2nd best high school band in Japan. The joint concert of these two bands took place in Sapporo at the world-renowned Sapporo Concert Hall. Additionally, the CCHS Concert Band has won a gold medal at the annual Massachusetts Instrumental and Choral Conductors Association invitational for the past 18 consecutive years, earning the chance to perform at Tanglewood, Boston's Symphony Hall, and Mechanics Hall in Worcester, Massachusetts numerous times.

In April 2008, the Orchestra and Chorus traveled to Walt Disney World to perform in Festival Disney. Competing separately, this was the Orchestra's first trip with Scott Knopf as conductor. The orchestra received an "Excellent" rating, the highest ranking given out at the competition.[citation needed]

In the winter of 2011, over 120 students participated in a musical production of "The Producers" 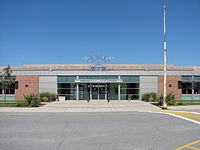 The Beede Swim and Fitness Center

Nationally recognized in 1998 as a top ski school,[3] the CCHS ski team has the best record in the state since its origin.[citation needed] The CCHS ski team competes at a local ski area in both slalom and giant slalom races. Dr. Bob Furey, head ski coach since 1972, was awarded the National Coaches Association Ski Coach of the Year Award in the early 1990s with assistance from 1988 Men's Olympic Biathlon coach Duane "Dusty" Johnstone. Johnstone retired in 2007. In 2007 he was awarded a Boston Globe All-Scholastic Coach of the Year.[4] The CCHS ski team is the leading ski team in eastern Massachusetts with respect to league championships, undefeated seasons, and sportsmanship awards.[citation needed]

Concord-Carlisle's fencing team was the first in the state of Massachusetts on a High School level.[5] This winter sport has a men's and women's team, with JV and Varsity levels. One of the coaches, Ariana Klinkov, is the world's highest rated female sabre referee, and the first female 3-weapon referee in the world.[6] CCHS' fencing team has gone on to produce two individual Olympic Champions,[7] as well as numerous individual state champions.

The CCHS football team made it to the 2010 Super Bowl at Gillette Stadium before losing to Duxbury High School. It was the team's first Super Bowl berth since 1978. The CCHS boys soccer team is also consistently highly ranked, not just in the state, but nationally. In 2010, they were ranked as high as #16 nationally and #2 in New England by the National Soccer Coaches Association of America. They also won their second straight state championship, their third in the last 5 years.