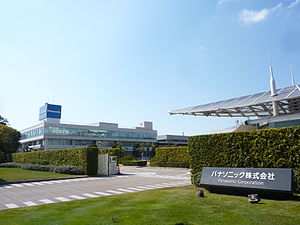 Since its founding in 1918, it has grown to become one of the largest Japanese electronics producers along with Sony and Toshiba. In addition to electronics, Panasonic offers non-electronic products and services such as home renovation services. Panasonic was ranked the 89th-largest company in the world in 2009 by the Forbes Global 2000 and is among the Worldwide Top 20 Semiconductor Sales Leaders.[4]

For 90 years since establishment, the name of the company was always topped with "松下" ("Matsushita"). The company's name before 1 October 2008 was referred to as "Matsushita Electric Industrial Co., Ltd.", used since 1935.[5][6]

In 1927, the company founder adopted a brand name "National" (ナショナル, Nashonaru?) for a new lamp product, knowing "national" meant "of or relating to a people, a nation."[7] In 1955, the company labeled its export audio speakers and lamps "PanaSonic", which was the first time it used its "Panasonic" brand name.[8] The company began to use a brand name "Technics" in 1965.[8] The use of multiple brands lasted for some decades.[8]

Panasonic was founded in 1918 by Konosuke Matsushita first selling duplex lamp sockets. In 1927, it produced a bicycle lamp, the first product it marketed under the brand name National. It operated factories in Japan and other parts of Asia through the end of World War II, producing electrical components and appliances such as light fixtures, motors, and electric irons.

After World War II, Panasonic regrouped and began to supply the post war boom in Japan with radios and appliances, as well as bicycles. Matsushita's brother-in-law, Toshio Iue founded Sanyo as a subcontractor for components after WWII. Sanyo grew to become a competitor to Panasonic, but the rivalry settled down and Sanyo were soon to be a subsidiary of Panasonic in December 2009.

The production of high-quality road and touring bicycles and bicycle components composed a little-known but substantial portion of the appliance division of the National/Panasonic corporation from 1945 through the end of the 1980s. As a child, Konosuke Matsushita, founder of National/Panasonic, had been adopted into a family who owned a small bicycle shop, and was passionate about bicycles and cycling.[12]

National and Panasonic bicycles were sold both in Japan and overseas to various retailers, who sometimes rebadged the bikes with private labels. Despite competition from other Japanese manufacturers, Matsushita enacted a corporate policy forbidding low quality in Panasonic bicycles no matter what the profit margins. When Schwinn was forced by economics to outsource bicycles built overseas, they chose the Panasonic World series, a successful model in production from 1972. As the only vendor to meet Schwinn's rigid manufacturing and production standards, Panasonic built several models for Schwinn, such as the World Traveller and the World Voyager. During the 1970s and 1980s, Panasonic produced a full range of rugged steel frame bicycles, produced in modern factories complete with bikes made in Taiwan under their name. By 1989, Panasonic division managers were reporting that bicycles brought less revenue (and less profit) per square foot of warehouse than any other product in the corporate division. Following the death of Konosuke Matsushita, Panasonic abandoned the US bicycle market at the end of September, 1989.[13] Panasonic currently produces hand built frames in Japan for keirin track racing under Nihon Jitensha Shinkokai (NJS) approved standards.

In 1961, Konosuke Matsushita traveled to the United States and met with American dealers. Panasonic began producing television sets for the U.S. market under the Panasonic brand name, and expanded the use of the brand to Europe in 1979.[14]

The company used the National trademark outside of North America during the 1950s through the 1970s. (The trademark could not be used in the USA, probably because it was already in use by the National Radio Company who were operating in a closely related product area.) It sold televisions, hi-fidelity stereo receivers, multi-band shortwave radios, and marine radio direction finders, often exported to North America under various U.S. brand names. The company also developed a line of home appliances such as rice cookers for the Japanese and Asian markets. In India, Panasonic is among the top 100 Most Trusted brands listed by The Brand Trust Report . Rapid growth resulted in the company opening manufacturing plants around the world. National/Panasonic quickly developed a reputation for well-made, reliable products.

The company debuted a hi-fidelity audio speaker in Japan in 1965 with the brand Technics. This line of high quality stereo components became worldwide favorites. The most famous products being its turntables, such as the SL-1200 record player, known for its high performance, precision, and durability. Throughout the 1970s and early 1980s, Panasonic continued to produce high-quality specialized electronics for niche markets such as shortwave radios, as well as developing a successful line of stereo receivers, CD players, and other components. 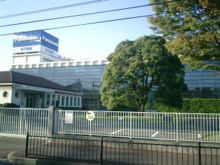 Since 2004, Toyota has used Panasonic batteries for its Toyota Prius, an environmentally friendly car made in Japan.[16]

On January 19, 2006 Panasonic announced that, starting in February, it will stop producing analog televisions (then 30% of its total TV business) to concentrate on digital TVs.[17]

On November 3, 2008 Panasonic and Sanyo were in talks, resulting in the eventual acquisition of Sanyo. The merger was completed in December 2009, and resulted in a mega-corporation with revenues over ¥11.2 trillion (around $110 billion). As part of what will be Japan's biggest electronics company, the Sanyo brand and most of the employees will be retained as a subsidiary.[18][19]

In November 1999, the Japan Times reported that Panasonic planned to develop a "next generation first aid kit" called the Electronic Health Checker. At the time, the target market was said to be elderly people, especially those living in rural areas where medical help might not be immediately available, so it was planned that the kit would include support for telemedicine. The kits were then in the testing stage, with plans for eventual overseas distribution, to include the United States.

With the announcement that Pioneer would exit the production of its Kuro plasma HDTV displays, Panasonic purchased many of the patents and has incorporated these technologies into its latest Viera plasma displays. Panasonic remains the only HDTV manufacturer to concentrate solely on plasmas for its large (40-inch or higher) HDTVs, while many rivals have moved onto LCD and LED technologies.[20]

In recent years the company has been involved with the development of high-density optical disc standards intended to eventually replace the DVD and the SD memory card.

On July 29, 2010 Panasonic reached an agreement to acquire the remaining shares of Panasonic Electric Works and Sanyo shares for $9.4 billion.[21][22][23]

Panasonic used to own Universal Studios, then known as the Music Corporation of America, since acquiring the company in 1990 but sold it to Seagram in 1995. Universal Studios is now a unit of NBC Universal.

April 2011: The company will cut its work force by 40,000 mainly from overseas division by the end of fiscal 2012 in a bid to streamline overlapping operations. The curtailment is about 10 percent of its group work force.[24]

October 2011: Panasonic announced it will trim its money-losing TV business as it will cease production of Plasma TVs at its plant in Amagasaki, Hyogo Prefecture by March 2012, cutting 1000 jobs in the process.[25]

Panasonic produces electronic products under the Panasonic and Sanyo brands.

Panasonic sells radio (audio) products for automobiles and light trucks in the US market under the Panasonic brand (aftermarket) and as OEM equipment in Japanese automobile brands such as Toyota, Honda and Subaru. Non-Japanese automakers such as GM and Volkswagen have also used OEM stereos made by Panasonic.

Panasonic Corporation of North America is the name of the company's USA division, currently headquartered in Secaucus, New Jersey.[26] Founded in New York City at the MetLife Building in September 1959, it was known as Matsushita Electric Corporation of America (MECA) prior to 2005.

Shop@Panasonic is a chain of stores in the United Kingdom and Ireland which sells only Panasonic electronics. The store is based on the same structure as Sony Centre. The stores are usually located in shopping centres such as Centrale, and brand itself the official Panasonic retailer.

Panasonic Mobile Communications manufactures mobile handsets and related equipment for the Japanese market. It has the second largest market share for mobile phones in Japan after Sharp. It used to market its GSM phones worldwide, but in December 2005 the company announced its withdrawal from overseas markets. In summer 2008 rumors emerged that the company was considering to re-enter the Asian market with its VS84 handset.

Panasonic Avionics Corporation[28] (PAC), a subsidiary of Panasonic Corporation of North America, is the world's leading supplier of in-flight entertainment (IFE) and communication systems. Headquartered in Lake Forest, California where engineering, development and testing is performed while system installation, field engineering, major quality functions, certification and program management are performed at the Bothell, Washington facility - Panasonic Avionics Corporation employs approximately 2,800 employees based in over 70 locations worldwide, with major facilities in London, Toulouse, Hamburg, Dallas, Dubai and Singapore. A majority of the component manufacturing is carried out in Osaka, Japan.

The company provides airline passengers with a wide array of interactive applications at their seats, combining entertainment (digital music and movies on demand, games, interactive moving maps, satellite TV, and online shopping) with business tools (E-mail, live flight schedules, and in-flight internet access). PAC is also one of the chief suppliers to both Boeing and Airbus and their IFE systems will be featured on both the Boeing 787 Dreamliner and the Airbus A380 aircraft. Among the many worldwide customers that use PAC systems are award-winning airlines such as Qantas, Emirates, Singapore Airlines and Virgin Atlantic.

In early 2008, Panasonic partnered with Shopatron to handle its online order fulfillment, incorporating retailers into the online sale.[29] 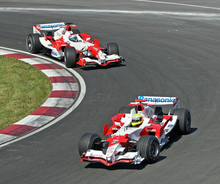 Panasonic were the principal sponsors of the now defunct Toyota Racing Formula One team.

Panasonic were a primary sponsor of Toyota's Formula One program, Panasonic Toyota Racing. Hiro Matsushita, grandson of the company founder, is a former race car driver who ran a company overseeing sponsorship arrangements for the company.

Panasonic is an official partner and sponsor of Major League Soccer.

Panasonic has sponsored some professional filmmakers by allowing them to borrow the Camera for their projects. One such Panasonic_Lumix_DMC-GH1 model camera was used to film the pilot of the Swedish Horror Film Marianne . [30]

Panasonic sponsored Sterling Marlin in the Nextel Cup Series. Panasonic was to sponsor the 14 in 24 races but the team shut down in July

Panasonic is the primary sponsor of the 2007 World Solar Challenge.[31]

Panasonic is the Official Worldwide Olympic Partner for 2008 Summer Olympics.

They were originally the official partner and sponsor of the Boston Celtics from 1975 to 1989, along with Technics. Various Panasonic ads appear at the old Boston Garden during the 1980s.

Between 1981-83 Panasonic were the shirt sponsors of English football club Nottingham Forest F.C.

Panasonic is ranked 9th place out of 15 in Greenpeace’s Guide to Greener Electronics (company shares 9th place with its competitor Sony) which rates electronics companies on policies and practices to reduce their impact on the climate, produce greener products, and make their operations more sustainable. [32]. The company is one of the top scorers on the Products critera, praised for its good product life cycles and the number of products which are free from polyvinyl chloride plastic (PVC). It also scores maximum points for the energy efficiency of its products with 100 percent of its TVs meeting the latest Energy Star standards and exceeding the standby power requirement

However, Panasonic's score is let down by its low score on the Energy criteria with the guide stating it must focus on planned reductions of greenhouse gases (GHG), set targets to reduce GHG emissions by at least 30% by 2015 and increase renewable energy use by 2020.[32]