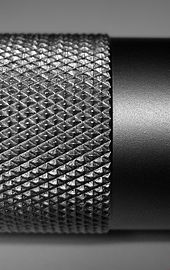 Knurling is a manufacturing process, typically conducted on a lathe, whereby a visually attractive diamond-shaped (criss-cross) pattern is cut or rolled into metal.

Two examples of the use of knurling in hand tools

Knurling allows hands or fingers to get a better grip on the knurled object than would be provided by the originally smooth metal surface. Occasionally, the knurled pattern is a series of straight ridges or a helix of "straight" ridges rather than the more-usual criss-cross pattern.

Knurling may also be used as a repair method: because a rolled-in knurled surface has raised-up areas surrounding the depressed areas, these raised areas can make up for wear on the part. In the days when labor was cheap and parts expensive, this repair method was feasible on pistons of internal combustion engines, where the skirt of a worn piston was expanded back to the nominal size using a knurling process. As auto parts have become less expensive, knurling has become less prevalent than it once was, and is specifically recommended against by performance engine builders.[1]

Knurling is also used on the grips of darts[2] and the pegs of most BMX bicycles. Aside from adding functionality to an object (valve repairs and hand grips being some of the most common), knurling also adds an attractive pattern to the material. The knurled nut is one such application, which uses a knurled finish instead of hexagonal or square edges which helps in tightening or loosening the nut without the use of a tool. The knurled surfaces provide enough grip to hold the nut between the thumb and forefinger. Hence it is also called a thumb nut. It is mainly used on small diameter bolts. Knurled nuts are typically used in electrical components, musical instruments and in automobiles. Brass ones are preferred over steel ones since the chances of getting rounded are less in brass ones.

On the lathe, knurl cutting is usually accomplished using the same automatic-feed mechanisms that are used to cut screw threads; knurling can be thought of as simply a series of threads cut at extremely coarse pitch and in both the left-hand and right-hand directions.

More common than knurl cutting, knurl rolling is usually accomplished using one or more very hard rollers that contain the reverse of the pattern to be imposed. It is possible for a "straight" knurl (not criss-crossed) to be pressed with a single roller, however the material needs to be supported adequately to avoid deformation. A criss-cross pattern can be accomplished using any of:

Hand knurling tools are available. These resemble pipecutters but contain knurling wheels rather than cutting wheels. Usually, three wheels are carried by the tool: two left-handed wheels and one right-handed wheel or vice-versa.

Annular rings
Frequently used when the mating part is plastic. Rings allow for easy mating but ridges make it difficult to pull the components apart.
Linear knurl
Used with mating plastic pieces, the Linear Knurl allows greater torsion between components.
Diamond knurl
A hybrid of Annular Rings and Linear Knurling in which a diamond shape is formed. It is used to provide better grip on components.