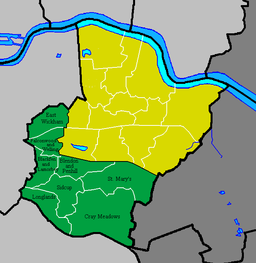 Old Bexley and Sidcup is a borough constituency represented in the House of Commons of the Parliament of the United Kingdom. It elects one Member of Parliament (MP) by the first past the post system of election.

Sir Edward Heath, prime minister of the United Kingdom from 1970 to 1974, held this seat and its predecessors from 1950, and announced his retirement at the end of the 1997-2001 parliament; at the age of 85 he was by now the nation's oldest member of parliament.

The seat covers the Bexley and Sidcup areas, it formerly included Welling and Danson Park which moved to Bexleyheath and Crayford constituency at the 2010 election.

It is made up of eight electoral wards from the London Borough of Bexley:

Following their review of parliamentary representation in South London, and as a consequence of changes to ward boundaries, the Boundary Commission for England recommended that part of Danson Park ward be transferred from Old Bexley and Sidcup to the constituency of Bexleyheath and Crayford.