Dongye, which means the Eastern Ye, was a Korean chiefdom which occupied portions of the northeastern Korean peninsula from roughly 3rd-century BCE to around early 5th-century. It bordered Goguryeo and Okjeo to the north, Jinhan to the south, and China's Lelang Commandery to the west. Today, this territory consists of the provinces of South Hamgyŏng and Kangwon in North Korea, and Gangwon in South Korea. 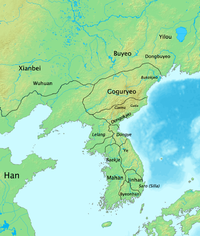 Dongye appears in history as a vassal state of Goguryeo. In early 5th-century, however, King Gwanggaeto the Great of Goguryeo annexed Dongye, leading to Goguryeo's domination of the entire northern portion of the Korean peninsula and most of Manchuria. A small part of Dongye in the south was absorbed into Silla.

Dongye considered itself the same people as Goguryeo, and shared the language and ethnic origins of the people of Okjeo and Goguryeo. This may indicate that Dongye also shared a common origin with Buyeo and Gojoseon. The population was recorded to be 20,000 families.

Very little information about Dongye has survived; most of the extant information comes from the discussion of the Eastern barbarians in the Chinese Records of Three Kingdoms. The custom of "Mucheon" (무천, 舞天), a festival of worshipping heaven through song and dance in the 10th month, is mentioned in some records. This appears to have been closely related to the Goguryeo festival of Dongmaeng, held at the same time of year, which also incorporated martial displays. The people worshiped the tiger as a deity.

The economy of Dongye was based primarily on agriculture, including sericulture and hemp cultivation.[1] The Mucheon festival was largely aimed at securing a good harvest in the coming year. Their agriculture appears to have been well-organized at the village level. Dongye law meted out stiff penalties for those who encroached on communal land.