Stollen
This article is about the food. For the musical term, see Bar form.

A Stollen is a loaf-shaped cake containing dried fruit, and covered with sugar, powdered sugar or icing sugar. The cake is usually made with chopped candied fruit and/or dried fruit, nuts and spices. Stollen is a traditional German cake, usually eaten during the Christmas season, when called Weihnachtsstollen or Christstollen. A similar cake, found in Dutch cuisine, is called a Kerststol in Dutch, while in Italian cuisine the panettone also shows a likeness. 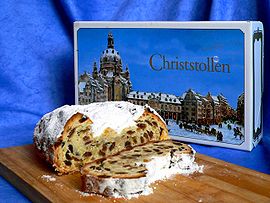 Stollen is a bread-like fruitcake made with yeast, water and flour, and usually with zest added to the dough. Candied orange peel and candied citrus peel (Zitronat),[1] raisins and almonds, and different spices such as cardamom and cinnamon are added. Other ingredients, such as milk, sugar, butter, salt, rum, eggs,[2] vanilla,[3] other dried fruits and nuts and marzipan may also be added to the Stollen dough. Except for the fruit added, the dough is quite low in sugar. The finished cake is sprinkled with icing sugar. The traditional weight of a Stollen is around 4.4 pounds (2 kg), but smaller sizes are now available.

The Dresden Stollen (originally Striezel), a moist, heavy bread filled with fruit, was first mentioned in an official document in 1474,[4] and the most famous Stollen is still the Dresdner Stollen,[5] sold, among other places, at the local Christmas market, Striezelmarkt. Dresden Stollen is produced in the city of Dresden and distinguished by a special seal depicting King Augustus II the Strong. This "official" Stollen is produced by only 150 Dresden bakers.

The early Stollen was a different pastry, the ingredients were very different - flour, oats and water.[6]

As a Christmas pastry, Stollen was baked for the first time at the Saxon Royal Court in 1427,[7] and was made with flour, yeast, oil and water.

The Advent season was a time of fasting, and bakers were not allowed to use butter, only oil, and the cake was tasteless and hard.[4]

In the 15th century, in medieval Saxony (in central Germany, north of Bavaria and south of Brandenburg), the Prince Elector Ernst (1441 - 1486) and his brother Duke Albrecht (1443–1500) decided to remedy this by writing to the Pope in Rome. The Saxon bakers needed to use butter, as oil in Saxony was expensive, hard to come by, and had to be made from turnips, which was unhealthy.

Others were also permitted to use butter, but with the condition of having to pay annually 1/20th of a gold Gulden to support the building of the Freiburg Minster. The ban on butter was removed when Saxony became Protestant.

Over the centuries, the cake changed from being a simple, fairly tasteless "bread" to a sweeter cake with richer ingredients, such as marzipan, although the traditional Stollen is not as sweet, light and airy as the copies made around the world. 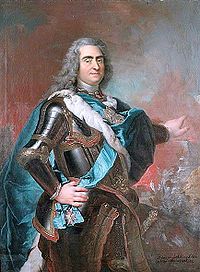 Every year a Stollenfest takes place in Dresden. This historical tradition ended only in 1918 with the fall of the monarchy,[7] and started again in 1994, but the idea comes from Dresden’s history.

Dresden’s Christmas market was mentioned in the chronicles for the first time in 1474.[7]

In 1560, the bakers of Dresden offered the rulers of Saxony Christmas Stollen weighing 36 pounds each as gift, and the custom continued.[7]

Augustus II the Strong (1670–1733) was the Elector of Saxony, King of Poland and the Grand Duke of Lithuania. The King loved pomp, luxury, splendour and feasts. In 1730, he impressed his subjects, ordering the Bakers’ Guild of Dresden to make a giant 1.7-tonne Stollen, big enough for everyone to have a portion to eat. There were around 24,000 guests who were taking part in the festivities on the occasion of the legendary amusement festivity known as Zeithainer Lustlager.[7] For this special occasion, the court architect Matthäus Daniel Pöppelmann (1662-1737), built a particularly oversized Stollen oven.[7] An oversized Stollen knife also had been designed solely for this occasion.[8]

Today, the festival takes place on the Saturday before the second Sunday in Advent, and the cake weighs between three and four tonnes. A carriage takes the cake in a parade through the streets of Dresden to the Christmas market, where it is ceremoniously cut into pieces and distributed among the crowd, for a small sum which goes to charity. A special knife, the Grand Dresden Stollen Knife, a silver-plated knife, 1.60 meters long weighing 12 kg, which is a copy of the lost baroque original knife from 1730, is used to festively cut the oversize Stollen at the Dresden Christmas fair.[8]

The largest Stollen was baked in 2010 by Lidl; it was 70 meters long and was certified by the Guinness Book of World Records, at the trainstation of Haarlem.[9]

A stollen is like regular sweetened fruit bread. However, because it is slathered with melted unsalted butter and rolled in sugar as soon as it comes out of the oven, the result is a much better keeping and moister product. The marzipan rope in the middle is optional. The dried fruits are macerated in rum or brandy for a superior tasting bread.