NB: Vulcan being associated with fire and ironwork, names such as "Vulcan Foundry" were common in many towns and cities. There was no connection with Vulcan Iron Works in the United States.

It was originally opened in 1832 as Charles Tayleur and Company to produce girders for bridges, switches and crossings, and other ironwork following the opening of the Liverpool and Manchester Railway. Because of the distance from the locomotive works in Newcastle-upon-Tyne, it seemed preferable to build and support them locally. In 1832, Robert Stephenson became a partner for a few years. The company had become The Vulcan Foundry Company in 1847 and acquired limited liability in 1864. From the beginning of 1898, the name changed again to the The Vulcan Foundry Limited, dropping the word 'company.'

The site had its own railway station, Vulcan Halt, on the former Warrington and Newton Railway line from Earlestown to Warrington Bank Quay. The halt was opened on 1 November 1916[1] by the London and North Western Railway, and closed on 12 June 1965.[2] 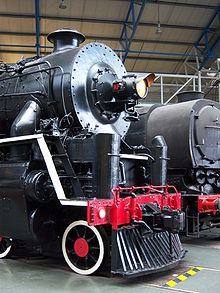 Chinese KF7 in the National Railway Museum in York

The first two locomotives were 0-4-0 Tayleur and Stephenson for the North Union Railway, similar to Stephenson's "Planet" design. Next were three 2-2-0s of a later "planet" type for the Warrington and Newton Railway. Other early orders came from the Leicester and Swannington Railway and the Birmingham and Derby Junction Railway.

There were then some 4-2-0s for America which were possibly the first British 'bogie' locomotives, though there is no record of how, or whether, they were pivoted.

From 1835 the company was selling to France, Austria and Russia, the beginnings of an export trade which was maintained throughout the life of the company. The company's locomotives had a strong Stephenson influence, many during the following decade being of the "long boiler" design. In 1852 the first locomotives ever to run in India were supplied to the Great Indian Peninsula Railway.

A number of Fairlie locomotives were built, including Taliesin for the Ffestiniog Railway and Josephine one of the NZR E class (1872). During 1870 the company supplied the first locos to run in Japan, and a flangeless 0-4-0T for a steelworks in Tredegar which was still using angle rails. A number of Matthew Kirtley's double-framed goods engines were also produced for the Midland Railway. The healthy export trade continued, particularly to India and South America, and continued after World War I.

Following the formation of the London, Midland and Scottish Railway in 1924 some very large orders were received, including over a hundred 0-6-0T engines and seventy-five LMS Compound 4-4-0 locomotives. The most notable design manufactured during this period was the large 4-8-4 built for the Chinese National Railways in 1934-35. These fine locomotives were equipped with a mechanical stoker and six of them were fitted with booster engines on the tender, providing an extra 7670 lbs tractive effort. Of the 24 exported, one returned to the UK and is preserved at the National Railway Museum in York.[3]

Through the 'thirties the company survived the trade recessions with the aid of more orders from India, some from Tanganyika and Argentina, and a large order in 1934 from the LMS for 4-6-0 "Black Fives" and 2-8-0 Stanier-designed locomotives.

From 1939 the works was mostly concerned with the war effort, becoming involved in the development and production of the Matilda tank. From 1943 large orders were received from the Ministry of Supply for locomotives, 390 Austerity 2-8-0s and fifty Austerity 0-6-0 saddle tanks.

In 1944 the Vulcan Foundry acquired Robert Stephenson and Hawthorns and in 1945 received an order for 120 "Liberation" 2-8-0 locomotives for UNRRA in Europe.

The war had left India's railways in a parlous state and in 1947, with foreign aid, embarked on a massive rebuilding plan. The Vulcan Foundry benefited from orders for XE, XD, and YD 2-8-2s; and ten WG 2-8-2s sub-contracted from the North British Locomotive Company, but the writing was on the wall for all British manufacturers. Not only was the competition fierce from other countries, but India had developed the ability to build its own locomotives.

In 1931, the company supplied the first experimental diesel shunter to the London, Midland and Scottish Railway. In 1936 Vulcan, a diesel-mechanical 0-6-0 shunter with a Vulcan-Frichs 6-cylinder 275 hp (205 kW) diesel engine was loaned to the LMS; and was then used by the War Department, which numbered it 75 (later 70075). Following the end of World War II, it found industrial use in Yugoslavia.

In 1938 ten diesel railcars were ordered by New Zealand Railways, the NZR RM class (Vulcan). They were supplied in 1940, although one was lost at sea to enemy action. In 1948 it supplied 10 Class 15 Diesel Electric shunters to Malayan Railways, as well as 20 Class 20 Diesel Electric locomotives for the same company nine years later.

The works has produced many locomotives for both domestic and foreign railways. It was a major supplier of diesel-electrics to British Railways notably the Class 55 Deltic. The works also developed a prototype Gas turbine locomotive, the British Rail GT3.

In 1957 the business became part of the English Electric group.

Although the works still produced diesel engines under name Ruston Paxman Diesels Limited, which had been moved from Lincoln, locomotive manufacture finished in 1970. Output was mainly for marine and stationary applications, but the company was the supplier of choice for British Rail Engineering for locos built at Doncaster and Crewe.

The factory passed through various hands as English Electric was bought by GEC, which in turn became GEC Alsthom then Alstom, and finally as part of MAN B&W Diesel in 2000. At the end of 2002 the works closed. It was then an industrial estate (appropriately called "Vulcan Industrial Estate"). The site is just north of Winwick Junction where the line to Newton Le Willows branches off to the west from the West Coast Main Line. All the (ex) factory buildings on the site were demolished in October 2007 but the workers cottages, known as the "Vulcan Village", still survive at the southern corner of the site. As of early 2010 work has started on the construction of 630 homes on the levelled site by the developer St Modwen.[4]