The Prehistoric landmark of Stonehenge is distinctive and famous enough to have become frequently referenced in popular culture. The landmark has become a symbol of British culture and history, owing to its distinctiveness and its long history of being portrayed in art, literature and advertising campaigns, as well as modern media formats, such as television, film and computer games. This is in part because the arrangement of standing stones topped with lintels is unique, not just in the British Isles, but in the world. 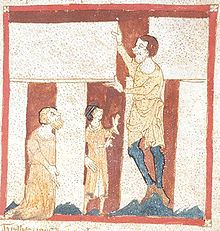 The oldest known depiction of Stonehenge, a giant helps Merlin build Stonehenge. From a manuscript of the Brut by Wace in the British Library (Egerton 3028). Belief in, and depiction of, Arthurian legend was common in this period.

The interest in 'ancient' Britain can be traced back to the sixteenth and seventeenth century, following the pioneering work of the likes of William Camden, John Aubrey and John Evelyn. The rediscovery of Britain's past was also tied up in the nation's emerging sense of importance as an international power. Antiquarians and archaeologists, notably William Stukeley, were conducting excavations of megalithic sites, including Stonehenge and the nearby Avebury. Their findings caused considerable debate on the history and meaning of such sites, and the earliest depictions reflected a search for a mystical explanation.

Earlier explanations, including the view proposed by Inigo Jones in 1630, that Stonehenge was built by the Romans such was its sophistication and beauty, were disproved in the late seventeenth century. It was proven that Stonehenge was the work of indigenous neolithic peoples. From this period onwards artists made images of barrows, standing stones and excavated objects which increasingly drew on highly imaginative ideas about the prehistoric people that created them. These helped to create the image of Britain that a broadening audience was becoming aware of through illustrated books, prints and maps. Poets and other writers deepened the impact of this visual material by imagining ancient pasts and mythologising the distant roots of the growing British Empire. Debates about British ancestry and national identity saw a growing conviction that the British were an ancient people, and that the newly named 'United Kingdom', of which Scotland had become a part in 1707, might find greater harmony through searching for a common past. For the English, this past was to be found in the West, starting around Stonehenge and stretching into the ancient Celtic regions of Wales and Cornwall. 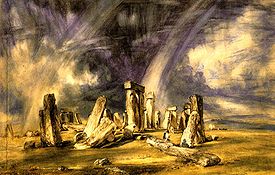 During the early nineteenth century it was artists such as John Constable and J.M.W. Turner who helped to make the megalithic sites a part of the popular imagination and understanding of Britain's past. The philosopher Edmund Burke proposed the idea of the 'sublime' sense as being evoked by 'feelings of danger and terror, obscurity and power, in art as well as life'. This was already a feature of artistic and literary works of the period, and provided the theoretical basis for a growing appreciation of desolate landscapes and ancient ruins. For these reasons Stonehenge became of particular interest for artists. Burke himself wrote

Stonehenge, neither for disposition nor ornament, has anything admirable; but those huge rude masses of stone, set end on end, and piled high on each other, turn the mind on the immense force necessary for such a work.

Pile of Stone-henge! So proud to hint yet keep
Thy secrets, thou lov'st to stand and hear
The plain resounding to the whirlwind's sweep
Inmate of lonesome Nature's endless year.

Turner and Constables' paintings deviated from the actual state of the stones. Turner particularly added stones that were not there in reality, and those that were, were incorrect in their dimensions. The paintings were arranged for a romantic effect popular at the time however. Throughout the nineteenth century, a new motive emerged in the depictions of Stonehenge, that of an anti-pagan approach, with paintings by the likes of William Overend Geller, with his painting The Druid's Sacrifice in 1832. In the novel "Tess of the d'Urbervilles" by Thomas Hardy, the main character, Tess, is captured by the police at Stonehenge, the 'heathen' nature of the setting being used to highlight the character's temperament.

The image of Stonehenge became adapted in the twentieth century by those wishing to advertise using a monument viewed as a symbol of Britain. The Royal Navy exploited this sense of identification by naming an S class destroyer and one of their S Class submarines HMS Stonehenge. The Shell Oil Company commissioned the artist Edward McKnight Kauffer to paint a series of posters during the interwar period, to be used to encourage tourism by car owners. Stonehenge was one of those depicted.

By now a powerful and instantly recognisable symbol, the monument was featured in a wide number of ways. The Beatles are seen performing on Salisbury Plain with Stonehenge visible in the background in their 1965 film Help!. The site has also been used for concerts, starting with the Stonehenge Free Festival in 1972. Perhaps in recognition of the site's link to popular music, the mockumentary film This is Spinal Tap featured the titular fictional rock band band performing a song named "Stonehenge" on stage. In one of the many embarrassing events on their comeback tour, confusion about abbreviating inches and feet results in a Stonehenge replica so small that it was in danger of being trod upon by the Little People hired to dance around it.

The momument continues to be featured in film, television and radio, either to question the origin or history of Stonehenge, or to play upon its position as an instantly recognisable structure and symbol of Britain. In books by Kurt Vonnegut and S. M. Stirling amongst others, alternative theories are suggested and explored as part of the larger plot. The monument has also become popular in computer games, where alternative uses are often posited for Stonehenge, or its iconic nature is explored.