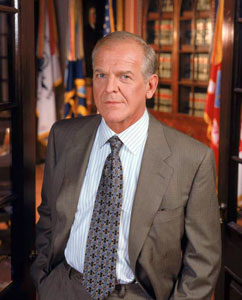 John Spencer ( – ) was an Emmy- and -winning American television actor best known for his role as , the on the "".

Spencer was born as John Speshock in , and grew up in nearby .

He began his television career on "". He played 's detective sidekick in the 1990 courtroom thriller "Presumed Innocent". From 1990 to 1994, he was a regular cast member on "", playing the rumpled, pugnacious associate attorney Tommy Mullaney. Later, he acted in the romantic comedy "" (1995) as a wisecracking co-worker to 's basketball referee; Spencer portrayed the role of Captain Hugh Paulsen in the 1995 FMV game ; "The Rock" (1996) as FBI Director Womack, and the 2002 production of . Paralleling his character on , he was a recovering alcoholic and . Spencer was actually the first actor cast in "The West Wing". [ [http://findagrave.com/cgi-bin/fg.cgi?page=gr&GRid=12709665 Findagrave.com - John Speshock Spencer] Accessed , .] Spencer was perhaps best known to the 80's generation of filmgoers for his brief role in the 1983 movie , staring Matthew Broderick, as an Air Force Captain who refuses to launch the Nuclear Missiles in the pre-credit sequence of the film.

He won an for the 1981 production of "Still Life," about a Vietnam veteran, and received a Drama Desk nomination for "The Day Room." After two previous nominations, Spencer won his first in 2002 for Outstanding Supporting Actor in a Drama Series for his portrayal of Leo McGarry on "The West Wing". The episodes Spencer submitted for judging by the Emmy voters were "", in which Leo has to testify in front of a Congressional committee about the President's health and flashes back to his own medical lapse, and "".

Although not as visible as his co-star , he believed and fought for many of the same causes. He was probably best known for his work for awareness. He referred to himself as a "dyed-in-the-wool liberal" and described as one of his heroes.

He died following a heart attack in a Los Angeles hospital on , , four days before his 59th birthday. "West Wing" cast mate was visiting him at the time of his death. [ [http://transcripts.cnn.com/TRANSCRIPTS/0512/17/smn.03.html CNN "Saturday Morning News" transcript] Accessed March 6, 2007.] He is interred at in . [ [http://www.findagrave.com/php/famous.php?page=cem&FScemeteryid=100059 Browse by Cemetery: Laurel Grove Memorial Park] , . Accessed , .]

At the time of his death, he had appeared in two of the five "West Wing" episodes then in – "Running Mates" and "." His death was subsequently written into the show, as his character, vice presidential candidate McGarry, died of a heart attack on election night. Coincidentally, his character had a disconcerting history of heart problems. "West Wing" cast mate sang the musical number "" from the hit Broadway musical "Wicked", which she starred in, at his funeral.