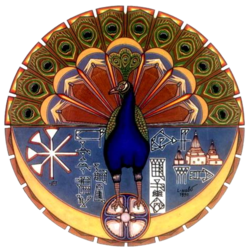 Melek Taus (ملك طاووس - Kurdish Tawûsê Melek), the Peacock Angel, is the Yazidi name for the central figure of their faith.

The Yazidi consider Tawûsê Melek an emanation of God and a benevolent angel who has redeemed himself from his fall and has become a demiurge who created the cosmos from the Cosmic egg. After he repented, he wept for 7,000 years, his tears filling seven jars, which then quenched the fires of hell.

Tawûsê Melek is sometimes transliterated Malak Ta'us, Malak Tawus, or Malik Taws. Melek was borrowed from the Arabic term "king" or "angel". Tawûs is uncontroversially translated "peacock"; in art and sculpture, Tawûsê Melek is depicted as peacock. However, peacocks are not native to the lands where Tawûsê Melek is worshipped.

The Yazidi believe that the founder of their religion, Sheikh Adi Ibn Musafir, was an incarnation of Tawûsê Melek.

Some Christians, Muslims and others identify Tawûsê Melek as Lucifer or Shaytān (Satan). According to the Yazidi Black Book, the Yazidi are forbidden to say the name "Shaitan" because their people would be religiously persecuted by other faiths. [1][2]