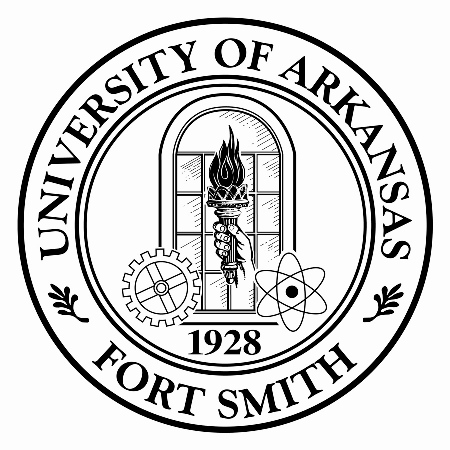 UA Fort Smith uniquely offers in-state tuition rates not only to residents, but also to residents of , , , , , and .

The University campus occupies convert|127|acre|km2 of an award-winning, nationally recognized that boasts 1,122 -inventoried trees representing 69 species. In 2003 the campus was named the "Best Maintained Landscape in the Nation". [cite web|url=http://www.uafortsmith.edu/Arboretum/SpecialRecognition|title=Grounds and Landscape Awards|work=University of Arkansas Fort Smith|accessdate=2007-05-30]

The University of Arkansas - Fort Smith was established in 1928 as an extension of the public school system in Fort Smith, Arkansas, with the superintendent acting as the college president and the high school principal as dean. Known originally as Fort Smith Junior College, the institution operated within the Fort Smith public school system until 1950, when the school was incorporated as a private, nonprofit institution with its own governing board. In September 1952, the College moved from borrowed facilities in the high school to its current site, initially occupying 15 acres.

During the private college era, enrollment increased, as did course offerings, the number of faculty, and facilities. A vocational-technical division was added in 1960. During this period, the college began developing the programs and character of a comprehensive community college — a new concept in Arkansas and across the nation.

In the fall of 1965, the electorate approved the creation of the Sebastian County Community Junior College District, along with a tax levy on the real and personal property of the county. The governor appointed a Board of Trustees, and the school again became a public institution.

In 1966, the institution’s name was changed from Fort Smith Junior College to Westark Junior College, and in 1972, to Westark Community College, indicating the larger area to be served and reflecting the more comprehensive mission.

Throughout the 1980s and early 1990s, the college developed and made changes within the context of its mission as a two-year institution. A significant development in 1989 was the establishment of a University Center. Five state universities partnered with the institution to offer six bachelor’s and seven master’s degree programs on campus. Between 1989 and 2002, 1,788 students graduated with bachelor’s degrees through the University Center.

In 1997, the Arkansas Legislature passed an act granting Westark the authority to offer in its own right up to nine applied bachelor’s degrees, developed in response to identified needs of the industries in the area served.

The name of the college was changed yet again in February 1998 to Westark College, more accurately portraying the role and scope of the institution.

On December 15, 2000, the Board of Trustees of Westark College entered into an agreement with the Board of Trustees of the to merge with the as a four-year institution. In 2001, the Sebastian County electorate voted to support the merger. A formal request to change affiliation status to that of a bachelor’s degree-granting institution under the name of the University of Arkansas – Fort Smith was submitted to the Higher Learning Commission in August 2001 and approved by the Institutional Actions Council on November 19, 2001.

The merger, which became official on January 1, 2002, endorsed the concept of UA Fort Smith as a unique university, one that offers applied and traditional baccalaureate degree programs, one- and two-year associate and technical programs, and noncredit business and industry training programs.

Two core missions mark the institution today — a commitment to serving the greater Fort Smith region’s business and industry with quality training and education, and a commitment to become a full-service regional university that is a destination of choice for students.

In 2006 Arkansas state senator David Bisbee attempted to review the University of Arkansas - Fort Smith's legal status. Bisbee claimed he wanted to make sure the institution was in good legal standing.

In 2008 the University of Arkansas - Fort Smith raised tuition rates and service fees by more than 8%. Vice chancellor for finance and academic affairs Mark Horn said the raise was justified by increased financial strains. University leaders stressed that they are still one of the most inexpensive institutions.

College of Applied Science and Technology

Programs in the College of Applied Science and Technology (CAST) are designed to prepare students to be productive and valuable members of the workforce. Degree programs leading to job opportunities are offered in technical and occupational areas. Through the College of Applied Science and Technology, students may complete a bachelor of applied science degree, an associate of applied science degree, technical certificate, or certificate of proficiency in technical and occupational programs. Additionally, the College offers courses and programs of limited duration which provide for the retraining and upgrading of skills for those who are already employed. The College of Lifelong Learning, under the auspices of CAST, oversees such programs as adult education, noncredit course work, and the UA Fort Smith Academy of the Arts.

The primary mission of the College of Business is to help undergraduate students develop interpersonal, technological, and functional business competencies that prepare them for leadership positions in our . This mission is supported by (1) an integrated practice-oriented curriculum that emphasizes leadership, ethics, and the development of entrepreneurship, (2) instructional development and application-oriented research that strengthens the program, and (3) service to University stakeholders, including active participation in regional economic development. The College of Business strives to be the College of choice among business schools in the region and to be recognized beyond the region for its applied approach to management education, research, and services. Through the College of Business, students can complete the bachelor of science degree in accounting, business administration, or marketing by meeting the prescribed degree requirements. Additionally, the College offers an associate degree and technical certificate of proficiency in workforce leadership.

The College of Health Sciences is dedicated to preparing graduates to be leaders within their health fields. Through a learning-centered approach to instruction, the College offers programs that integrate theory, innovative practice, and technology in classroom, laboratory, and clinical settings. All degree programs provide a foundation in general education so graduates are informed about current and future trends in healthcare and can respond to challenges in the workplace. The College of Health Sciences promotes educational opportunities for career advancement, employment mobility, and lifelong learning. Through the College of Health Sciences, students can complete a baccalaureate degree in nursing or imaging sciences with a track in ultrasound and/or management. Associate of applied science degree programs are available in dental hygiene, nursing, radiography, respiratory care, and surgical technology. A certificate program is available in practical nursing.

College of Humanities and Social Sciences

The College of Humanities and Social Sciences offers a comprehensive education in the liberal arts with specialized training in a variety of disciplines. Degree programs are designed to help students integrate, synthesize, and apply knowledge in real-life situations and to provide opportunities to develop leadership skills. Students may augment their education by selecting a minor area of study from within the College or from other colleges in the University. Through mastery of a primary discipline, students acquire a broad understanding of the world in which they live.

College of Languages and Communication

The College of Languages and Communication is dedicated to the ideals of effective communication through the study of language, literature, speech, rhetoric, and writing. By developing critical thinking and problem-solving skills, students demonstrate effective interpersonal, interpretive, and presentational communication skills. Students in the College of Languages and Communication can complete a bachelor of arts degree or a bachelor of science degree with teacher licensure by meeting the prescribed degree requirements.

The College of Science, Technology, Engineering, and Mathematics (STEM) provides students with knowledge of the fundamental concepts, thinking patterns, ethics, and learning methods of mathematics, the natural sciences, and technology in order to understand the past and present and to make informed decisions about the future of human society and the natural environment. The College delivers advanced specialized training to future leaders in mathematics, the sciences, engineering, and technology, developing thinking skills to prepare students for professional fields and graduate study.

The Sebastian Commons Apartments provide a gated, on-campus housing community to the primarily commuter-based UA Fort Smith campus. The Commons has a 480-bed occupancy. The rooms are fully furnished and equipped.

In cooperation with the Arkansas Forestry Commission, UA Fort Smith strives for excellence in "tree preservation, care, and planting, while at the same time developing an educational urban forestry awareness program and arboretum master plan." To this end, the University has made the entire campus an , with more than 69 species of trees mapped out by GPS technology.

The campus grounds have won numerous awards for and .

Though UA Fort Smith currently competes in the (NJCAA), the University is in the process of transitioning to the larger, more nationally renowned . From fall 2007 to spring 2009, the Lions will enter an NCAA Division II “exploratory phase,” though they will continue to compete at the NJCAA level. If the University meets the various requirements during this time, it will formally enter provisional NCAA Division II status in the 2009-2010 school year. The “provisional” status will be removed after one year of successful membership.

The volleyball program also holds the distinction of being named an NJCAA Academic All-American Team seven years in a row (1999-2005).