History of the Eastern Orthodox Church in North America

History of the Eastern Orthodox Church in North America

Estimates of the number of Eastern Orthodox adherents 'in North America vary considerably depending on methodology (as well as the definition of the term "adherent") and generally fall in range from 3 million to 6 million. Most Eastern Orthodox Christians are Russian Americans and Greek Americans, with Americans from other Eastern European countries and very small minorities of Americans of Western European, African and Latin American descent. 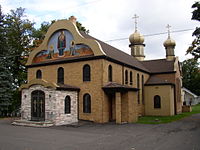 Russian traders settled in Alaska during the 18th century. In 1740, a Divine Liturgy was celebrated on board a Russian ship off the Alaskan coast. In 1794, the Russian Orthodox Church sent missionaries—among them Saint Herman of Alaska – to establish a formal mission in Alaska. Their missionary endeavors contributed to the conversion of many Alaskan natives to the Orthodox faith. A diocese was established, whose first bishop was Saint Innocent of Alaska. The headquarters of this North American Diocese of the Russian Orthodox Church was moved from Alaska to California around the mid-19th century.

It was moved again in the last part of the same century, this time to New York. This transfer coincided with a great movement of Uniates to the Orthodox Church in the eastern United States. This movement, which increased the numbers of Orthodox Christians in America, resulted from a conflict between John Ireland, the politically powerful Roman Catholic Archbishop of Saint Paul, Minnesota; and Alexis Toth, an influential Ruthenian Catholic priest. Archbishop Ireland's refusal to accept Fr. Toth's credentials as a priest induced Fr. Toth to return to the Orthodox Church of his ancestors, and further resulted in the return of tens of thousands of other Uniate Catholics in North America to the Orthodox Church, under his guidance and inspiration. For this reason, Ireland is sometimes ironically remembered as the "Father of the Orthodox Church in America." These Uniates were received into Orthodoxy into the existing North American diocese of the Russian Orthodox Church. At the same time large numbers of Greeks and other Orthodox Christians were also immigrating to America. At this time all Orthodox Christians in North America were united under the omophorion (Church authority and protection) of the Patriarch of Moscow, through the Russian Church's North American diocese. The unity was not merely theoretical, but was a reality, since there was then no other diocese on the continent. Under the aegis of this diocese, which at the turn of the 20th century was ruled by Bishop (and future Patriarch) Tikhon, Orthodox Christians of various ethnic backgrounds were ministered to, both non-Russian and Russian; a Syro-Arab mission was established in the episcopal leadership of Saint Raphael of Brooklyn, who was the first Orthodox bishop to be consecrated in America.

One of the effects of the devastation wreaked on the Russian Orthodox Church by the Bolshevik Revolution was a flood of refugees from Russia to the United States, Canada, and Europe. The Revolution of 1917 severed large sections of the Russian church—dioceses in America, Japan, and Manchuria, as well as refugees in Europe—from regular contact with the mother church. 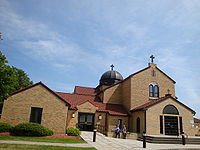 In 1920 Patriarch Tikhon issued an ukase (decree) that dioceses of the Church of Russia that were cut off from the governance of the highest Church authority (i.e. the Patriarch) should continue independently until such time as normal relations with the highest Church authority could be resumed; and on this basis, the North American diocese of the Russian Orthodox Church (known as the "Metropolia") continued to exist in a de facto autonomous mode of self-governance. The financial hardship that beset the North American diocese as the result of the Russian Revolution resulted in a degree of administrative chaos, with the result that other national Orthodox communities in North America turned to the Churches in their respective homelands for pastoral care and governance.

A group of bishops who had left their sees in Russia gathered in Sremski-Karlovci, Yugoslavia, and adopted a clearly political monarchist stand. The group further claimed to speak as a synod for the entire "free" Russian church. This group, which to this day includes a sizable portion of the Russian emigration, was formally dissolved in 1922 by Patriarch Tikhon, who then appointed metropolitans Platon and Evlogy as ruling bishops in America and Europe, respectively. Both of these metropolitans continued to entertain relations intermittently with the synod in Karlovci, but neither of them accepted it as a canonical authority. Between the World Wars the Metropolia coexisted and at times cooperated with an independent synod later known as Russian Orthodox Church Outside Russia (ROCOR), sometimes also called the Russian Orthodox Church Abroad. The two groups eventually went their separate ways. ROCOR, which moved its headquarters to North America after the Second World War, claimed but failed to establish jurisdiction over all parishes of Russian origin in North America. The Metropolia, as a former diocese of the Russian Church, looked to the latter as its highest church authority, albeit one from which it was temporarily cut off under the conditions of the communist regime in Russia.

After World War II the patriarchate of Moscow made unsuccessful attempts to regain control over these groups. After resuming communication with Moscow in early 1960s, and being granted autocephaly in 1970, the Metropolia became known as the Orthodox Church in America. [1] [2]. However, recognition of this autocephalic status is not universal, as the Ecumenical Patriarch (under whom is the Greek Orthodox Archdiocese of America) and some other jurisdictions have not officially accepted it. The reasons for this are complex; nevertheless the Ecumenical Patriarch and the other jurisdictions remain in communion with the OCA. The patriarachate of Moscow thereby renounced its former canonical claims in the United States and Canada; it also acknowledged an autonomous church established in Japan that same year. 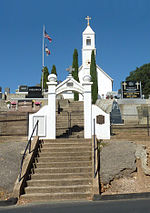 Today there are many Orthodox churches in the United States and Canada that are still bound to the Ecumenical or Antiochian Patriarchy, or other overseas jurisdictions; in some cases these different overseas jurisdictions will have churches in the same U.S. city. However, there are also many "pan-orthodox" activities and organizations, both formal and informal, among Orthodox believers of all jurisdictions. One such organization is the Standing Conference of Orthodox Bishops in America (SCOBA), the Standing Conference of Canonical Orthodox Bishops in the Americas, which comprises North American Orthodox bishops from nearly all jurisdictions. (See list of Orthodox jurisdictions in North America.)

There are over 2000 Orthodox parishes in United States. Roughly half of these belong to OCA, Greek and Antiochian Orthodox Churches, and the rest are divided among other jurisdictions.[1]