The Chitty are a distinctive group of Tamil people found mainly in Malacca and Singapore , who are also known as the Indian Peranakans. As of today, their population stands at 2,000. 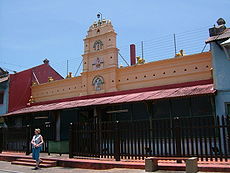 Like the Peranakans, the Chitty speak a Malay patois, which is mixed with many Tamil loan words. Many of the Chitty are unable to communicate in Tamil fluently.

Historical records stated that the Tamil traders from Panai in Tamil Nadu settled down in Malacca during the sovereignty of the Sultanate of Malacca. Like the Peranakans, they later settled down and freely intermingled with the local Malays and Chinese settlers. However, with the fall of the Malacca Sultanate after 1511, the Chitty eventually lost touch with their native land.

Under the administration of the Portuguese, Dutch and British colonizers, the Chitty eventually began simplifying their culture and customs by adopting local customs. This can be evidenced in the architecture of the Sri Poyatha Moorthi Temple, which was built by Thavinayagar Chitty, the leader of the Chitty people, in 1781 after the Dutch colonial government gave him a plot of land.

The traditional Chitty settlement is located at Kampung Tujuh along Jalan Gajah Berang, which is also inhabited by a small number of Chinese and Malays as well. Many of the Chitty have since found jobs in Singapore and other parts of Malaysia.

The ethnic identity of the Chitty is nearly lost. As many of them are assimilating into the mainstream Indian, Chinese, and Malay ethnic communities culturally, this small but distinct group of people that has survived for centuries is now on the brink of extinction.

The Chitty are a mixed people. Although they ethnically consider themselves to be Tamil, who have a Dravidian appearance and dark complexion, the Chitty appear to have varying degrees of Southeast Asian and Dravidian looks.

This resulted from the fact that the first Tamil settlers took in local wives, since they did not bring along any of their own women with them. Over time, the Chitty gathered physical features that were less Dravidian, and more Malay-looking.

The Chitty community are Hindu, worshipping in their three temples. Gods such as Ganesh and Shiva are worshipped in full gaiety. Hints of Taoist and Islamic influences are also evident in their religious rituals.

Culturally, the Chitty have largely assimilated into the Malay culture with some Chinese, Dutch and Portuguese influences, although certain elements of Indian culture do remain. This is especially true in the case of marriages, where offerings of fruits and burning of incense are used. In the case of food, Malay spices, ingredients and the way of cooking have largely supplanted the Indian style.

Chinese cultural influence is also evident, especially in the case of ancestral worship. Religious objects used for conducting rituals were also used by the Chinese. The Chitty are also influenced by the Chinese to some extent in their ceramics works of art.

Simplification of Tamil architecture among the Chitty is also present. Distinct from the Tamil, who have a complex Dravidian Temple Architecture in the Pallava style, that displays beautifully carved out sculptures of the Hindu gods in many rows, the Chitty temple tend to only have one row of these, or a picture of one single god in each of the three rows, as evidenced in the Sri Poyatha Moorthi Temple, built by Thaivanayagam Chitty in 1781.

Most of the Chitty have adopted the Malay costume. In the case of men, a comfortable sarong and Malay shirt may be worn, although a songkok may also be worn, especially for a Muslim. Women, on the other hand, wear a similar costume that are similar to the Peranakan Nonya.

Alongside their Chinese and Malay neighbors, the Chitty live in Kampong houses. Pictures of Hindu gods and Indian names can be seen just outside their houses, as their descendants tend to adopt Indian, rather than Malay surnames.

A typical Chitty home is distinctly marked by mango leaves arranged in a row, dangling from above the front door. Chitty temples are also adorned this way.