Annamalaiyar Temple (Tamil: திருஅண்ணாமலையார் திருக்கோயில்) is a Hindu temple dedicated to the Hindu deity Shiva, located at the foothills of the Annamalai Hill in the town of Thiruvannamalai in Tamil Nadu, India. Shiva is worshipped as Annamalaiyar or Arunachaleswarar represented by lingam, with his consort, Unnamalaiyaal (Apitakuchambaal - Parvati). The temple occupies a significant place in Saivism (sect of Shiva) realm and is regarded as one of the Pancha Bhoota Stalas (one of the five temples associated with the five classical elements) – this temple is associated with the element fire (Agni).

The temple complex spans 10 hectares and is one of the largest temples in India.[1] It houses 4 gopurams (gateway towers) with the tallest being the eastern tower with 11 storeys and a height of 66 metres (217 ft),[1] making it one of the tallest gopurams in India.

The Karthigai Deepam festival celebrated during the full moon day in November–December during which a huge beacon lit on the top of the hill. It can be seen from miles around and believed to be Shiva's lingam of fire joining the limitless skies.[2] The event is witnessed by 3 million pilgrims.[3] During each full moon day, the Annamalai Hill is swelled by close to 1 million pilgrims who do a girivalam (circumnavigate the base of the temple and the Annamalail hill)[1][2] and worship Annamalaiyar in the temple. 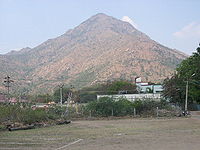 Legend has it that Shiva's consort Parvati once closed the eyes of Shiva playfully in the flower garden of Kailasha (the abode of Shiva). The whole universe was darkened for a moment and the earth was darkened for years, translating to a moment of time at Kailasha. Parvati performed penance with other worshippers and Shiva appeared as a flame of fire at the top of the Annamalai hill to remove the darkness.[4] He merged his half to Parvati's in the form of Ardhanarishvara - the half-female, half-male form of Shiva.[5] The Annamalai hill (meaning red mountain) lying behind the Annamalaiyar temple is always associated with the temple.[6] The hill is considered sacred and considered to be a lingam (representation of Shiva) in itself.[7]

The present masonry structure and gopurams date back approximately 9th century A.D. This has been determined from an inscription in the structure made during the reign of Chola kings who ruled in the 9th century A.D[8] Tiruvannamalai should have been under the sway of the Pallava Kings who ruled from Kanchipuram before the 9th century A.D - the earliest inscriptions dating back to early 9th century is an indication.[9] The 7th century nayanar saints Sambandar and Appar, have mentioned the deity in the poetic work Tevaram. Sekkizhar, the author of the Periyapuranam mentions that both Appar and Sambandar worshipped Arunchaleswarar in the temple. The Chola Kings ruled over the country for more than four Centuries from 850 A.D. to 1280 A.D. During the 14th Century, the Hoysala Kings had their capital at Tiruvannamalai starting 1328 A.D.[10] There are large number of inscriptions from the Sangama Dynasty (1336-1485 A.D.) and some inscriptions from Tuluva Dynasty (1491-1570 A.D.) that ruled the Vijayanagara Empire indicating generous gifts to the temple from the rulers.[9] There are inscriptions indicating Krishnadeva Raya (1509–1529 A.D.), the most powerful of the Vijayanagara kings making generous contribution to the temple.[9] During 17th century, the temple came under the sway of the Nawab of the Carnatic. There was confusion and chaos after 1753 A.D.[4] Muraru Raya, Krishna Raya, Mrithis Ali Khan, Burkat Ullakhan, French Soupries and Sambrinet, English Captain Stephen Smith besieged this place and had their successes and defeats. In 1790 A.D., it was captured by Tippu Sultan.[4] During the first half of the 19th century, it came under the British rule. The temple is currently maintained by the Hindu religious and Endowment board of the Government of Tamil Nadu.[11]

The temple is situated at the bottom of the Annamalai hill facing East. The temple occupies an area of about 25 acres of land. The walls on the East and West measure 700 feet each while that of the south measures 1479 feet and the northern one measures 1590 feet. It has got four stately towers on all the four sides and the eastern tower being the tallest of all is called the Rajagopuram. Its base is made of granite measuring 135 feet by 98 feet. This tower was built by king Krishnadevaraya of Vijayanagara and completed by Sevappa Nayaka[12] of Thanjavur. There are inscriptions that detail that the gopuram was built on the request of Sivanesa and his brother Lokanatha in 1572 A.D.[13] The southern tower is called "Thirumanjangopuram" and the western tower is called "Pei Gopuram". Ammani Ammal, a Sanyasini built the north gopuram which is named after her. The literary works of Nayaks, Raghunathabhyudayam and Sangitha Sudha mentions the gopurams.[13] The Tanjavuri Andhra Raja Charitamu mentions Krishnadevaraya building the gopuram and other prakarams (precincts of the temple).[13] The temple has 5 prakarams.[14] Each of the prakarams has a huge Nandi (sacred bull of Shiva) and several towers such as the "Vallala Maharaja Gopuram" and "Kili Gopuram" (parrot tower). Legend has it that saint Arunagirinathar attained divinity by taking the form of a parrot and the shrine is named after it.[15] An image of the story can be found in the tower.[15] 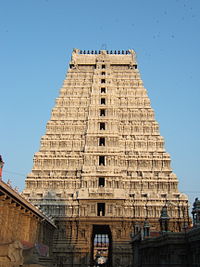 The main shrine of Annamalaiyar facing east houses images of Nandi and Surya (the Sun)[9] . It is the oldest of all structures in the temple.[14] Right behind on the walls of the sanctum, there is an image of Venugopalaswamy (an incarnation of Vishnu). Right around the sanctum, there are images of Somaskandar, Lingodbhavar (image of Shiva emnating from lingam), Durga, Chandekeswarar, Gajalakshmi, Arumugaswami, Dakshinamoorthy, Swarnabairavar, Nataraja and Palliyarai (divine room meant for resting deities) - these are regular features of Shiva temples in South India. The shrine of the consort, Unnamalai Amman lies in the second precinct of the temple - the Amman is in standing posture. Sambantha Vinayagar (elephant god) shrine is located to the north of the flag staff and Bali peeta (platform for sacrifice).[16] To the south of the 1000-pillared hall, there is a small shrine for Subramaya and a large tank.[2] "Pathala Lingam" (underground lingam) is the place where saint Ramanar is believed to have done his penance.[15] The shrine of Sivagangai Vinayagar is present in the northern bank of the Sivanganga tank.[16]

In the third precicnt, the main feature is the 16 pillared "Deepa darshana mandapam" (Hall of light). The temple tree, Magizha is considered sacred and medicanal; childless couple tie small cradles in the branches as a form of worship. Vedic texts describe the temple mast separated the earth and the sky during the creation of the universe.[17] The "Kalyana Mandapam" (Marriage Hall) is in the south-west of the precinct and built in Vijayanagara style. A stone trident is present in the outer shrine of the temple in open air and has protective railings like a sacred tree.[18] The "Vasantha Mandapam", the temple office and Kalahateeswarar shrine are present in the third precinct.[19] In the fourth precinct lies an image of large Nandi, "Brahma theertham" (temple tank), "Yanai thirai konda Vinayaga" shrine and a hall with a big Nandi 6 ft tall erected by Vallala Maharaja.[16] Inside the doorway of the first gopuram (or the fifth precinct), there is a 1000-pillared hall built during the late Vijayanagara period.[2] Krishna Devaraya constructed the hall during the late Vijayanagara period[2] and dug the tank opposite to it. The pillars in the hall are carved with images of yali (mythological beast with body of lion and head of an elephant), commonly used as the symbol of Nayak power.[20] The "Arunagirinathar Mandapam" is located to the right, the "Kalayana Linga Sundara Eswara Mandapam" and Gopurathilayanar shrine to the left of the broad flight of stone stairs that lead upwards to the "Vallala gopuram".[19] 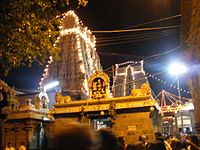 Every full moon night, tens of thousands of pilgrims worship Annamalaiyar by circumambulating the Arunachala hill barefoot.[2] The circumambulation covers a distance of about 14 km.[23] The circumbulation is believed to remove sins, fulfillment of desires and freedom from cycle of birth and rebirth. Offerings are made in a string of tanks, shrines, lingams, pillared meditation halls, springs and caves along the hill.[6] The practise is followed during normal days also and is referred as Giri Valam.

On the yearly Chitra Pournami (full moon) night in the Tamil calendar year, lakhs of pilgrims come from across the world to worship Annamalaiyar. Five ther (temple car) with wooden carvings, are used for the procession.

Tiruvoodal (திருவூடல் திருவிழா) is another festival celebrated during the first week of Tamil month Thai (from 14 till 18 January) every year.[24] On the morning of maatu pongal (15 and 16 January), Nandi is decorated with the garlands specially made with variety of fruits, vegetables and sweets. Annamalaiyar and his consort come out of the temple to perform the oodal ceremony in the evening. This particular event happens outside the temple on the Tiruoodal street.

The Annamalaiyar temple is one of the five Pancha Bhoota Stalas, five Shiva temples,[25] each representing the manifestation of natural elements - land, water, air, sky and fire.[26] In Annamalaiyar temple, Shiva is said to have manifested himself in the form of massive column of fire (Agni), whose crown and feet could not be found by the Hindu gods, Brahma and Vishnu. The main lingam in the shrine is referred as Agni Lingam and is believed to explain duty, virtue, self-sacrifice and finally liberation through ascetic life at the end of Agni kalpa[27].

The Aathara Stala are Shiva temples which are considered to be divine personifications of the Tantric chakras associated with human anatomy. The Annamalaiyar temple is called the Manipooraga stalam [19] associated with the Manipooraga chakra - the human anatomical cause for spiritual ignorance, thirst, jealousy, treachery, shame, fear, disgust, delusion, foolishness and sadness.[28]

Tirugnana Sambandar, the 7th century Tamil Saivite poet refers Annamalai and his consort Unnamalai in 10 verses in the first Tirumurai.[29] Appar (Tirunavukkarasar), a contemporary of Sambandar, refers Annamalai in 10 verses in the fifth Tirumurai.[30] Manickavasgar is a 9th century Tamil saint poet, whose work is classified as Tiruvacakam. He has reverred the deity here with his verses and refers to the deity as "AnnAmalai".[31] Arunagirinathar is a 15th century Tamil poet, who was born in Tiruvannamalai and spent his early years as a rioter and seducer of women; after having ruined his health he tried to commit suicide by throwing himself from the norhtern tower, but was believed to have been saved by the grace of God Murugan.[32] He became a staunch devotee and started composing Tamil hymns glorifying Murugan - the notable being the Thirupugazh.[33] The western world learnt about Tiruvannamalai during the mid of 20th century after the advent of popular saint, Ramana Maharishi (1879-1950 A.D.)[34]. Ramanar's meditation cave is on the lower slopes of the Annamalai hill and the ashram (hermitage) complex is on the foothills.[35] In the basement of the raised hall inside the temple has Partha Lingam, where Ramanar is said to have attained supremen awareness while ants devoured his flesh.[35] The place is also called a Mukthi Sthalam (place of salvation) and a lot of saints like Seshadri Swamigal, Gugai Namachivayar and Yogi Ramsuratkumar are associated with the temple.[15]