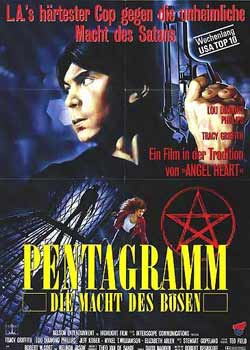 The sadistic Patrick Channing (played by ), known by most as the Pentagram Killer, is at large in , killing innocent people as a sacrifice to . His specific is engraving a symbol into the flesh of his victims before killing them.

Detective Russell Logan (played by ) is determined to bring the Pentagram Killer to justice. He receives an anonymous phonecall from a psychic called Tess Seaton (played by ) who can "feel" where he's going to strike next. Taking her word as correct, Logan goes on a and manages to track down Channing's lair. Logan manages to capture Channing, but not before taking a nasty stab wound to the chest.

Logan manages to recover from his and Channing is given the by the authorities and is killed in a . However, since Channing is a worshipper of Satan, Satan grants Channing The First Power -- . Channing returns from beyond the grave and is able to appear or disappear at will, as well as possess others. His highest priority -- get his revenge on Russell Logan.