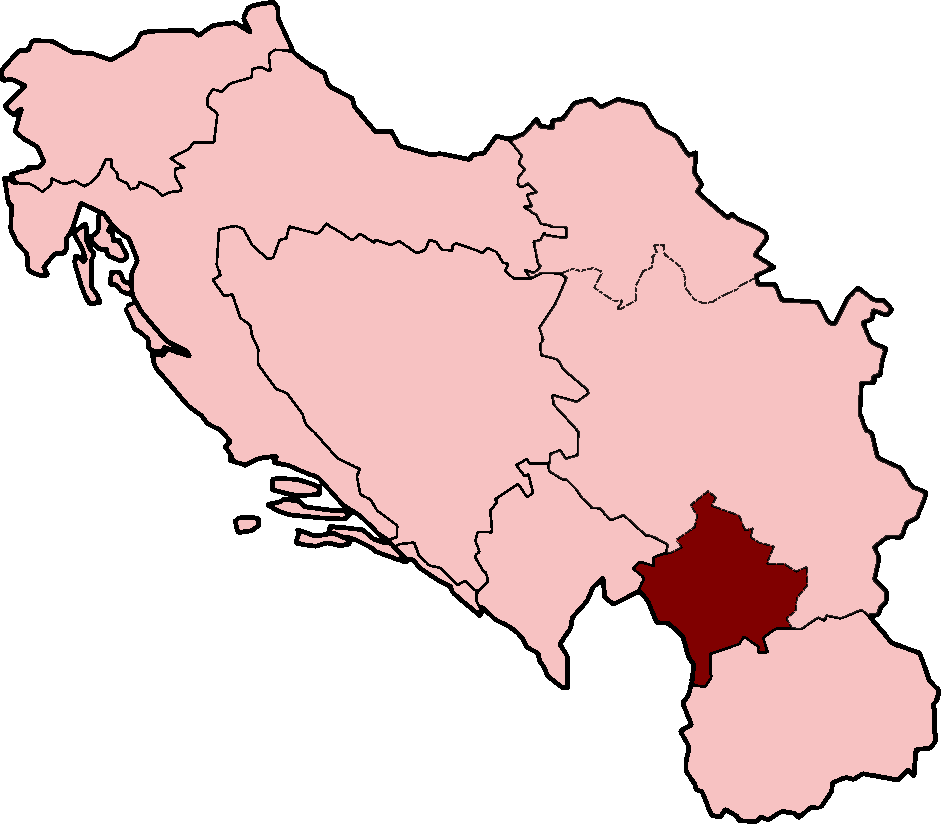 Socialist Autonomous Province of Kosovo (Serbo-Croatian: Социјалистичка Аутономна Покрајина Косово, "Socijalistička Autonomna Pokrajina Kosovo", Albanian: "Krahina Socialiste Autonome e Kosovës") was one of the two s of the incorporated into the from until . It was a predecessor of the modern day .

The Autonomous Province of Kosovo and Metohija received more and more autonomy and self-government within Serbia and Yugoslavia during the , and its name was officially changed in 1974 to "Socialist Autonomous Province of Kosovo" ("and " was removed because it was not used by the Kosovo Albanians and "Socialist" added to further show the Socialist ideal of then's SFRY) as per the Constitutions of SFRY and SR Serbia, when SAP Kosovo also gained its own Constitution. The Province of Kosovo gained the highest officials, most notably Presidency and Government, and gained a seat in the Federal Yugoslavian Presidency (including power on the federal level) which equated it to the states of SR Serbia.Fact|date=March 2008

The local Albanian-dominated ruling class had been asking for recognition of Kosovo as a parallel republic to Serbia within the Federation (with the extreme minority demanding an independent Kosovo), and after ’s death in , the demands were renewed. In March of Albanian students protested demanding independence of Kosovo. Subsequently the situation rapidly escalated into extremely violent mass-riots across the province that spread across 6 major Kosovo cities and included over 20,000 Albanian dissidents.Fact| mar 2008|date=March 2008 The Yugoslav authorities harshly prosecuted and contained the civil unrest. Emigration of non-Albanians increased and ethnic tensions between Albanians and non-Albanians greatly increased, with violent inner-attacks, especially aimed at the Yugoslavian officials and representatives of authority. Fact|date=March 2008

became the leader of the Serbian communists in , and then seized control over Kosovo and . This can especially be seen in the rift in Kosovo, which became the final turnout of possibilities of peace between Albanians and Yugoslavia.Fact|date=March 2008 On , Milošević led a mass celebration with hundreds of thousands (almost one million)Fact|date=March 2008 Serbs in on the 600th anniversary of a . Milošević's , which marked the beginning of his political prominence, was an important part of the events that contributed to the ongoing crisis in Kosovo. The ensuing Serbian nationalist movement was also a contributing factor to the .Fact|date=March 2008

In 1989, Milošević revoked the autonomy of Kosovo, returning it to the pre-1971 "Autonomous Province of Kosovo and Metohija" status, which was passed by the Kosovo Parliament on of .Fact|date=March 2008

In 2008 Kosovo declared independence from Serbia. As of October 10, 2008, 50 out of 192 sovereign United Nations member states have formally recognized the Republic of Kosovo. Serbia still considers Kosovo as part of its sovereign territory.

The only political party in the province was , which was part of the and part of the .Fact|date=March 2008

The of the Socialist Autonomous Province of Kosovo was the highest juridical act of the province.

Chairman of the Executive Council of the People's Committee of the Socialist Autonomous Province of Kosovo:
*, -

Chairman of the People's Liberation Committee of the Socialist Autonomous Province of Kosovo:
*, -