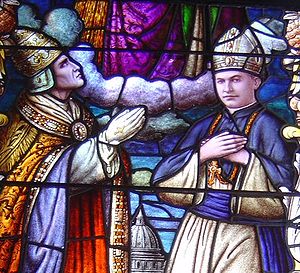 Pope Pius XI, depicted in this window at Cathedral of Our Lady of Peace, Honolulu, was ordinary of the universal Catholic Church and local ordinary of Rome. At the same time, Bishop Stephen Alencastre, Apostolic Vicar of the Sandwich Islands, was the local ordinary of Hawaii.

In those hierarchically organised churches of Western Christianity which have an ecclesiastical law system, an ordinary is an officer of the church who by reason of office has ordinary power to execute the church's laws.[1] The term comes from the Latin word ordinarius.

In Eastern Christianity, a corresponding officer is called a hierarch,[2] which comes from the Greek word ἱεράρχης (hierarchēs) meaning " president of sacred rites, high-priest"[3] and that from "ἱερεύς" (hiereus), "priest"[4] + "ἀρχή" (archē), amongst others "first place or power, rule".[5] In common usage in the Episcopal Church, an ordinary is a diocesan bishop.

The term is also employed within civic governance, notably in the US; the Ordinary role involves the discharge of certain, often legal or legally related, tasks falling to city or county authorities, such as licensing marriages and adjudicating claims against an authority.[6]

The law vesting ordinary power could either be ecclesiastical law, i.e. the positive enactments that the church has established for itself, or divine law, i.e. the laws which the church believes were given to it by God.[10] As an example of divinely instituted ordinaries, Roman Catholics believe that when Jesus established the Church he in turn established the episcopate and the Primacy of Simon Peter and endowed the offices with power to rule the Church.[11] Thus, in the Roman Catholic Church, the office of successor of Simon Peter and the office of diocesan bishop possess their ordinary power even in the absence of positive enactments from the Church.

Other ordinaries and hierarchs

In the Orthodox Church, a hierarch (ruling bishop) holds uncontested authority within the boundaries of his own diocese; no other bishop may perform any sacerdotal functions without the ruling bishop's express invitation. The violation of this rule is called eispēdēsis (Greek: εἰσπήδησις, "trespassing", literally "jumping in"), and is uncanonical. Ultimately, all bishops in the Church are equal, regardless of any title they may enjoy (Patriarch, Metropolitan, Archbishop, etc.). The role of the bishop in the Orthodox Church is both hierarchical and sacramental.[17]

This pattern of governance dates back to the earliest centuries of Christianity, as witnessed by the writings of Ignatius of Antioch (ca. 100 AD):

The bishop in each Church presides in the place of God.... Let no one do any of the things which concern the Church without the bishop.... Wherever the bishop appears, there let the people be, just as wherever Jesus Christ is, there is the Catholic Church.

And it is the bishop's primary and distinctive task to celebrate the Eucharist, "the medicine of immortality."[18][19] Saint Cyprian of Carthage (258 AD) wrote:

The episcopate is a single whole, in which each bishop enjoys full possession. So is the Church a single whole, though it spreads far and wide into a multitude of churches and its fertility increases.[20]

There are many churches, but only One Church; many episcopi but only one episcopate."[21]

In Orthodox Christianity, the church is not seen as a monolithic, centralized institution, but rather as existing in its fullness in each local body. The church is defined Eucharistically:

in each particular community gathered around its bishop; and at every local celebration of the Eucharist it is the whole Christ who is present, not just a part of Him. Therefore, each local community, as it celebrates the Eucharist ... is the church in its fullness."[22]

This is not to say that the Orthodox Church has a Congregationalist polity; on the contrary, the local priest functions as the "hands" of the bishop, and must receive from the bishop an antimension and chrism before he is permitted to celebrate any of the Sacred Mysteries (sacraments) within the diocese.

An Orthodox bishop's authority comes from his election and consecration. He is, however, subject to the Sacred Canons of the Orthodox Church, and answers to the Synod of Bishops to which he belongs. In case an Orthodox bishop is overruled by his local synod, he retains the right of appeal (Greek: Ἔκκλητον, Ékklēton) to his ecclesiastical superior (e.g. a Patriarch) and his synod.