The Han River is a major river in South Korea and the fourth longest river on the Korean peninsula after the Amnok, Duman, and Nakdong rivers.[1] It is formed by the confluence of the Namhan River (South Han River), which originates in Mount Daedeok, and the Bukhan River (North Han River), which originates on the slopes of Mount Geumgang in North Korea. The River flows through Seoul and then merges with the Imjin River shortly before it flows into the Yellow Sea. The two major branches of the river, the Namhan River and the Bukhan River, come together at Yangsu-ri, Gyeonggi-do province, at which point it is referred to as the Han River. It then passes through Seoul and continues on to the Yellow Sea (or West Sea to Koreans). Broad tidal flats can be found at the mouth of the Han River, where it meets the sea along the Korean Demilitarized Zone that divides South and North Korea.[2]

The total length of the Han River (to include its tributaries the Namhan and Bukhan Rivers) is approximately 514 kilometres (319 mi).[3]

Although it is not a long river, the lower Han is remarkably broad for such a relatively short river. Within Seoul city limits, the river is more than 1 kilometre (0.62 mi) wide. Prior to the construction of a number of major dams, the river was known for its huge coefficient of river regime (ratio between the maximum and minimum amount of flow) of 1:390. (For comparison, The Thames and the Rhine have coefficients of 1:8 and 1:18, respectively.)[4]

The Han River and its surrounding area played an important role in Korean history. The Three Kingdoms of Korea strove to take control of this land, where the river was used as a trade route to China (via the Yellow Sea). However, the river is no longer actively used for navigation, because its estuary is located at the borders of the two Koreas, barred for entrance by any civilian.

There have been fears, such as the 1986 Water Panic in South Korea, that North Korea could attack Seoul by releasing a flood from the upstream dam.[5]

Along the banks of the river, especially in Seoul, pedestrian walkways and bicycle paths are available on both sides of the river. Various restaurants and cafes are located on these paths. While most bridges crossing the Han are for motor vehicles or subways only, citizens may cross select bridges on foot or by bicycle.

The Namhangang (Namhan meaning 'South Han' and gang meaning 'river') is sometimes, but not always, referred to as the "Han" in South Korea. The term "South Han" is understood irrespective of which side of the border one stands.

Even though "Namhan" and "Bukhan" are homophones with the acronyms Namhan (남한; "South Korea") and Bukhan (북한; "North Korea"), used commonly in South Korea, this is a mere coincidence. The hanja for the Han River is not 韓 ("Korea") but 漢 (Chinese).

What is today called the Han River has been called by different names through the course of Korean history. During the period of the Han Commanderies on the peninsula and the early part of the three kingdom's period the river was oft referred to as the Daesu (대수; 帶水). The state of Goguryeo called it the Arisu (아리수; 阿利水), Baekje called it the Ugniha (욱리하; 郁里河), while the kingdom of Silla termed it the Iha (이하; 泥河).[8]

The Han River has played a central role in Korean history from the earliest times. The kingdom of Baekje was the first to lay claim to the Han River, recognizing its strategic significance, as a primary waterway linking the central western region of the peninsula with the Yellow Sea as well as for the river's fertile alluvial banks, a relative rarity on the mountainous peninsula. Namhan Fortress, located south of Seoul, is posited as an early capital of Baekje. It was not long before the region near the effluence of the Han River with the Yellow Sea, around present day Seoul, became a bone of contention between Baekje and the rising kingdom of Goguryeo. During the reign of its King Jangsu (r. 413-491) Goguryeo wrested the western terminus of the Han River from its rival Baekje. The ensuing decades would see a tug of war over the region until 551 when Baekje, in an alliance with Silla, confirmed its control over the Han River basin. But this alliance was not to last, and in 553 Silla broke its alliance with Baekje to seize control of the entire river as part of its bid for domination of the peninsula.

With the demise of both Baekje and Goguryeo and then the unification of the peninsula under Silla in 668, the Han River entered its long era as a "Korean river", first under the control of Unified Silla (668-918), then of the succeeding Goryeo dynasty (918-1392), and finally as part of the Joseon dynasty (1392-1910). During the Joseon period the Han River achieved new prominence as the primary waterway of the new Korean capital of Seoul, or Hanyang. 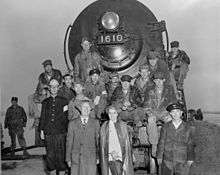 The Han River now belongs largely to the Republic of Korea, or South Korea, with its effluence in the Yellow Sea a few nautical miles from North Korea (though some of the river's tributaries are in North Korea). During the first few decades of South Korea's existence the Han River became a byword for pollution, as burgeoning industry and an impoverished populace used it as a convenient spillway for industrial and urban refuse. Though it no longer plays a central role in commerce or transportation it is a prime fixture in the life of the South Korean capital and in the last decade has become the focus of government sponsored environmental efforts to clean it up and transform it into an ecological jewel of the capital. During the 1988 Summer Olympics in Seoul, the Han River was the site of the Olympic rowing regatta.

From 2009 the Lee Myung Bak administration resuscitated a project to dig a canal linking the Han River with the Yellow Sea at Incheon. This forty kilometer Gyeongin Canal will link the Han River near Gimpo in Seoul to Incheon and is scheduled for completion in 2011. It will accommodate both large container and passenger vessels.

Tributaries of the Han 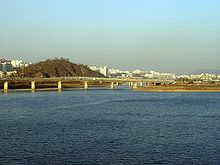 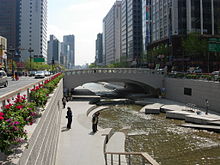 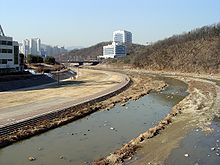 Bridges over the lower Han

From the west to the east 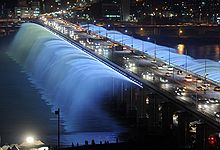 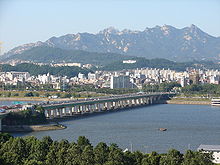 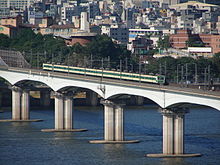 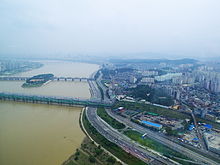 The Han River features as a location in several movies, notable films include :