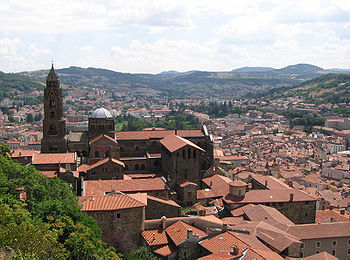 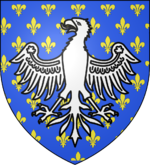 The Martyrology of Ado and the first legend of St. Front of Périgueux (written perhaps in the middle of the tenth century, by Gauzbert, chorepiscopus of Limoges) speak of a certain priest named George who was brought to life by the touch of St. Peter's staff, and who accompanied St. Front, St. Peter's missionary and first Bishop of Périgueux. A legend of St. George, the origin of which, according to Duchesne is not earlier than the eleventh century, makes that saint one of the seventy-two disciples, and tells how he founded the Church of Civitas Vetula in the County of Le Velay, and how, at the request of St. Martial, he caused an altar to the Blessed Virgin to be erected on Mont Anis (Mons Anicius).

After St. George, certain local traditions of very late origin point to Sts. Macarius, Marcellinus, Roricius, Eusebius, Paulianus, and Vosy (Evodius) as bishops of Le Puy. It must have been from St. Paulianus that the town of Ruessium, now Saint-Paulien, received its name; and it was probably St. Vosy who completed the church of Our Lady of Le Puy at Anicium and transferred the episcopal see from Ruessium to Anicium. St. Vosy was apprised in a vision that the angels themselves had dedicated the cathedral to the Blessed Virgin, whence the epithet Angelic given to the cathedral of Le Puy. It is impossible to say whether this St. Evodius is the same who signed the decrees of the Council of Valence in 374. Neither can it be affirmed that St. Benignus, who in the seventh century founded a hospital at the gates of the basilica, and St. Agrevius, the seventh-century martyr from whom the town of Saint-Agrève Chiniacum took its name, were really bishops.

Duchesne thinks that the chronology of these early bishops rests on very little evidence and that very ill supported by documents; before the tenth century only six individuals appear of whom it can be said with certainty that they were bishops of Le Puy. The first of these, Scutarius, the legendary architect of the first cathedral, dates, if we may trust the inscription which bears his name, from the end of the fourth century.

Legend traces the origin of the pilgrimage of Le Puy to an apparition of the Blessed Virgin to a sick widow whom St. Martial had converted. No French pilgrimage was more frequented in the Middle Ages. Charlemagne came twice, in 772 and 800; there is a legend that in 772 he established a foundation at the cathedral for ten poor canons (chanoines de paupérie), and he chose Le Puy, with Aachen and Saint-Gilles, as a centre for the collection of Peter's Pence.

Theodulph, Bishop of Orléans, brought to Our Lady of Le Puy, as an ex-voto for his deliverance, a magnificent Bible, the letters of which were made of plates of gold and silver, which he had himself put together, about 820, while in prison at Angers. St. Mayeul, St. Odilon, St. Robert, St. Hugh of Grenoble, St. Anthony of Padua, St. Dominic, St. Vincent Ferrer, St. John Francis Regis were pilgrims to Le Puy.

The Church of Le Puy received, on account of its dignity and fame, temporal and spiritual favours. Concessions made in 919 by William the Young, Count of Auvergne and Le Velay, and in 923 by King Raoul, gave it sovereignty over the whole population of the town (bourg) of Anis, a population which soon amounted to 30,000 souls. In 999, Pope Sylvester II consecrated his friend Théodard, a monk of Aurillac, Bishop of Le Puy, to replace Stephen of Gévaudan, whom his uncle Guy, Bishop of Le Puy, had in his lifetime, designated to be his successor, and whom a Roman council had excommunicated. Sylvester II exempted Théodard from all metropolitan jurisdiction, a privilege which Pope Leo IX confirmed to the Bishops of Le Puy, also granting them the right, until then reserved to archbishops exclusively of wearing the pallium. "Nowhere", he said in his Bull, "does the Blessed Virgin receive a more special and more filial worship."

It was from Le Puy that Pope Urban II dated (15 August 1095) the Letters Apostolic convoking the Council of Clermont, and it was a canon of Le Puy, Raymond d'Aiguilles, chaplain to the Count of Toulouse, who wrote the history of the crusade. Pope Gelasius II, Pope Callistus II, Pope Innocent II and Pope Alexander III visited Le Puy to pray, and with the visit of one of these popes must be connected the origin of the great Jubilee which is granted to Our Lady of Le Puy whenever Good Friday falls on 25 March, the Feast of the Annunciation. It is supposed that this jubilee was instituted by Callistus II, who passed through Le Puy, in April, 1119, or by Alexander III, who was there in August, 1162, and June, 1165, or by Pope Clement IV, who had been Bishop of Le Puy. The first jubilee historically known took place in 1407, and in 1418 the chronicles mention a Bull of Pope Martin V prolonging the duration of the jubilee. During the Middle Ages, everyone who had made the pilgrimage to Le Puy had the privilege of making a will in extremis with only two witnesses instead of seven.

Honoured with such prerogatives, the Church of Le Puy assumed a sort of primacy in respect to most of the Churches of France, and even of Christendom. This primacy manifested itself practically in a right to beg, established with the authorization of the Holy See, in virtue of which the chapter of Le Puy levied a veritable tax upon almost all the Christian countries to support its hospital of Notre-Dame.

For more details on this topic, see Girona.

In Catalonia this droit de quête, recognized by the Spanish Crown, was so thoroughly established that the chapter had its collectors permanently installed in that country. A famous "fraternity" existed between the chapter of Le Puy and that of Girona in Catalonia.

The statue of Our Lady of Le Puy and the other treasures escaped the pillage of the Middle Ages. The roving banditti were victoriously dispersed, in 1180, by the Confraternity of the Chaperons (Hooded Cloaks) founded at the suggestion of a canon of Le Puy. In 1562 and 1563 Le Puy was successfully defended against the Huguenots by priests and religious armed with cuirasses and arquebusses. But in 1793 the statue was torn from its shrine and burned in the public square. Père de Ravignan, in 1846, and the Abbé Combalot, in 1850, were inspired with the idea of a great monument to the Blessed Virgin on the Rocher Corneille. Napoleon III placed at the disposal of Bishop Morlhon 213 pieces of artillery taken by Pélissier at Sebastopol, and the colossal statue of "Notre-Dame de France" cast from the iron of these guns, amounting in weight to 150,000 kilogrammes, or more than 330,000 lbs. avoirdupois, was dedicated 12 September 1860.

The saints specially venerated in the diocese are:

At the age of eighteen M. Olier, afterwards the founder of Saint-Sulpice, was Abbot in commendam of Pébrac and, in 1626 was an "honorary count-canon of the chapter of St. Julien de Brioude".

We may mention as natives of this diocese: the Benedictine, Hughes Lanthenas (1634–1701), who edited the works of St. Bernard and St. Anselm, and was the historian of the Abbey of Vendôme; the Benedictine, Jacques Boyer, joint author of Gallia Christiana; Cardinal de Polignac (d. 1741), author of the "Antilucretius".

The cathedral of Le Puy, which forms the highest point of the city, rising from the foot of the Rocher Corneille, exhibits architecture of every period from the fifth century to the fifteenth. The architectural effect is audacious and picturesque.

The four galleries of the cloister were constructed during a period extending from the Carolingian epoch to the twelfth century. The Benedictine monastery of the Chaise Dieu united in 1640 to the Congregation of St-Maur, still stands, with the fortifications which Abbot de Chanac caused to be built between 1378 and 1420, and the church, rebuilt in the fourteenth century by Clement VI, who had made his studies here, and by Gregory XI, his nephew. This church contains the tomb of Clement VI. The fine church of S. Julien de Brioude, in florid Byzantine style, dates from the eleventh or twelfth century. Besides the great pilgrimage of Le Puy, we may mention those of Notre-Dame de Pradelles, at Pradelles, a pilgrimage dating from 1512; of Notre-Dame d'Auteyrac, at Sorlhac, which was very popular before the Revolution; of Notre-Dame Trouvée, at Lavoute-Chilhac.