Together in Electric Dreams

Together in Electric Dreams 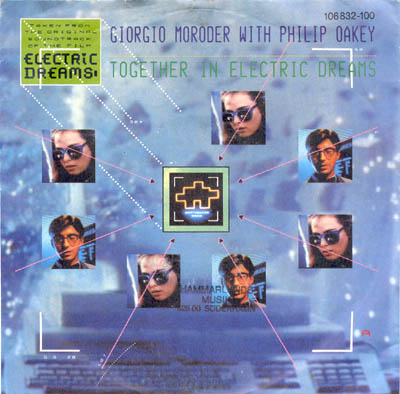 "Together in Electric Dreams" is a song by the British singer and composer and producer . It was written by Oakey and Moroder and recorded for the original soundtrack of the 1984 film "Electric Dreams".

It later formed part of the joint album "", released in 1985. Released as a single in the UK in September 1984 it proved a major commercial success, actually eclipsing the original film it was intended to promote. It reached Number three in the , staying in the charts for 13 weeks. It would prove to be the only hit of the brief Oakey/Moroder partnership. It was finally released as a single in the in 1988.

The film "Electric Dreams" was to be director 's first full feature film. Previously Barron had made a name for himself conceiving and directing a number of innovative music videos during the early 1980s. His biggest success had been directing the music video for 's "" in 1981 which helped the single become number one in the UK and U.S.

Moroder wrote "Together in Electric Dreams" which was to be a male solo vocal, when he asked who Barron would like to sing the lyrics, Barron immediately thought of his former associate Philip Oakey.

When Oakey recorded the song it was over very quickly, after the first full recording Moroder told Oakey that the first take was "good enough, as first time is always best". Oakey who thought he was just rehearsing insisted on doing another take. Moroder let him but to this day Oakey is convinced that Moroder still used the first take on the final production. Originally released to advertise the film, "Together in Electric Dreams" quickly overshadowed the original film and became a hit single in its own right.

Oakey states that it is ironic that a track that took literally ten minutes to record would become a worldwide hit, while some of his Human League material that took over a year to record didn't.

Association with The Human League

Although the Human League have never recorded their own version, due to the song's popularity the band frequently play a unique Human League version when they perform live, often as an encore. The Human League version differs considerably from the original in that it has a longer more dramatic intro and the female backing vocals by and are now as prominent as Oakey's lead.

Like many film soundtrack promos, the video splices key scenes from the film with footage of Philip Oakey. In addition, other promotional scenes were created especially for the video: an "Electric Dreams" signboard is seen behind Oakey twice, the actual movie poster is seen behind him on the freeway and the computer from the film is seen relaxing on the beach. Oakey is seen being driven around purportedly (but was actually ) singing the lyrics. The video would famously finish with a sock puppet parody of the Lion on a TV screen, on a beach.

Giorgio Moroder himself makes a cameo appearance in the video as the boss of the radio station taken over by the computer.

* It is played on the fictional radio station Flash FM in the video game "".