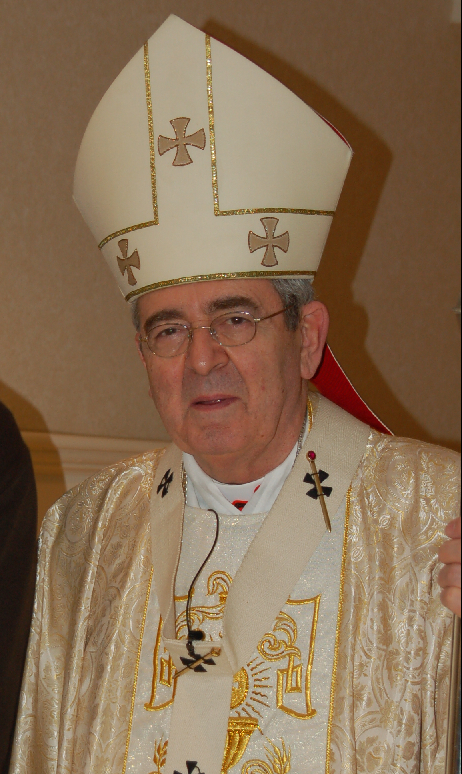 Justin Francis Rigali (born ) is a Cardinal and from the who currently serves as the Archbishop of Philadelphia. He is one of the most influential bishops among the , having been both personally and theologically close to .

Rigali is the youngest of seven children (three of whom entered religious life) born to Henry A. Rigali and Frances Irene White. He was born and raised in Los Angeles, California, and studied and at several universities and . Rigali also studied at the Gregorian University (1961-1964), where he earned a in , and also at the (1964-1965). He was ordained to the priesthood by in the , Los Angeles, on . Between his studies in , Rigali did pastoral work in Los Angeles, Downey, and Pomona.

In 1961 he received a degree from , where he is now a member of the Board of Trustees. He was an assistant during the first two sessions of the , and entered the English section of the Secretariat of State on ; he would later advance to be section director in 1970, acting as English translator to . Rigali then served, from September 1966 to February 1970, at the in . It was during this period that, on , he was named a papal chamberlain () by .

During his service at the Secretariat of State, he was a at a and a at the , the Vatican's training institute for priests who will be future papal ambassadors. Rigali also accompanied on a number of international pastoral visits, including the first two journeys to the in 1979 (including a trip to ) and 1987. After being made a Prelate of Honour of His Holiness (1980), he was named titular archbishop of "" and President of the on . John Paul II conferred episcopal ordination on Rigali in Albano on , with Cardinals and as co-consecrators.

From 1985 to 1990, in addition to being President of the Pontifical Ecclesiastical Academy, he held a number of positions at the Vatican, serving the Secretariat of State, the Council for the Public Affairs of the Church, the and the . On , , he was named Secretary of the Congregation for Bishops and on , he became the Secretary of the . He was a member of the Permanent Interdicasterial Commission and served as a consultant to the Pontifical Commission for Latin America and the . During the same time, he was also engaged in pastoral service to a number of parishes in .

Cardinal Rigali was the only U.S. cardinal to serve as a concelebrant at the 2005 funeral mass for . He participated in the 2005 papal conclave that elected . Cardinal Rigali remains eligible to vote in any future s that begin before his 80th birthday on , .

In , Rigali became embroiled in the scandal surrounding accusations of pedophilia and sex with minors among clergy. He staunchly defended the actions of his two immediate predecessors, and , who were named in a Philadelphia report as sponsors of a coverup.

In , Rigali traveled to the along with Archbishop of Newark and Seán Cardinal Patrick O'Malley of Boston to attend a press conference by President to support a constitutional amendment initiative in the banning or marriages. As chairman of the United States Conference of Catholic Bishops' Pro-Life Committee, he remarked during the annual Washington, D.C. pro-life rally in January 2007 that "there are reasons for rejoicing" in the pro-life cause: the growing participation by young people and a heightened awareness of the issue's intense and growing moral sensitivity among them, who will eventually have a contribution to make to societal issues. He has a series of weekly [http://www.youtube.com/results?search_query=cardinal+Rigali Lenten discourses on YouTube] .

In , he was named by as a member of the , the curia department that puts forward to the the names of those considered to be appropriate choices to be appointed as bishops.