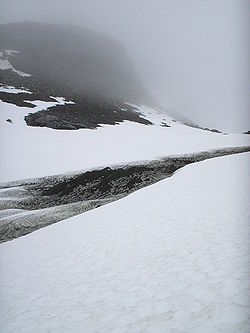 A dirt cone is a feature of a glacier or snow patch, in which dirt or debris has fallen onto ice, firn or snow. This debris forms a coating which, when thick enough, insulates the underlying ice or snow. Although deposition of sediments may be uniform originally, dirt cones can be produced due to the constant growing and shrinking of the underlying snow, which in turn masses the debris together. The surrounding ice or snow melts away, leaving the dirt cone. Wilson, J. Warren (November 1953). "The initiation of dirt cones on snow". Journal of Glaciology 2 (14): 281–287. </ref>