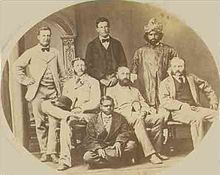 The party for Giles' fourth expedition. Young is seated on the left.

Jess Young was an explorer who accompanied Ernest Giles during his fourth expedition, making some important botanical collections along the way.

Little is known of his early life; it is not even certain whether "Jess" was a full given name or an abbreviation. In May 1875 Giles, in listing the members of his expedition party, referred to him as "Mr Jess Young, a young friend of Sir Thomas Elder, lately arrived from England." Giles' party left Beltana, South Australia on 6 May, and arrived in Perth, Western Australia on 13 November. During the expedition, Young collected the specimens of a number of new plant species, including Eucalyptus salubris, Eucalyptus youngiana and Eremophila youngii, all from the vicinity of Queen Victoria Spring. The latter two species were later named in Young's honour.

Not much is known of Young's life following his expedition with Giles, but the National Herbarium in Melbourne has specimens of Acacia collected by him between 1875 and 1880. In 1878, he published an account of his expedition in Journal of the American Geographical Society of New York, describing himself as "Astronomer of the Giles Expedition".