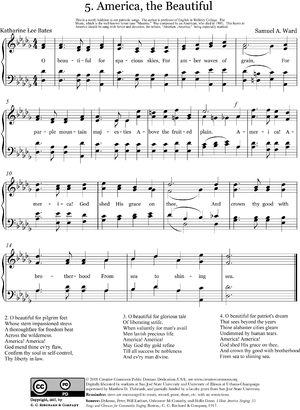 "America the Beautiful" is an American patriotic song. The lyrics were written by Katharine Lee Bates and the music composed by church organist and choirmaster Samuel A. Ward.

Bates originally wrote the words as a poem, Pikes Peak, first published in the Fourth of July edition of the church periodical The Congregationalist in 1895. At that time, the poem was titled America for publication.

Ward had originally written the music, Materna, for the 19th century hymn O Mother dear, Jerusalem in 1882. Ward's music combined with the Bates poem was first published in 1910 and titled America the Beautiful.

The song is one of the most beloved and popular of the many American patriotic songs.[1] From time to time it has been proposed as a replacement for The Star-Spangled Banner as the National Anthem, including television sign-offs.

In 1893, at the age of thirty-three, Bates, an English professor at Wellesley College, had taken a train trip to Colorado Springs, Colorado, to teach a short summer school session at Colorado College. Several of the sights on her trip inspired her, and they found their way into her poem, including the World's Columbian Exposition in Chicago, the "White City" with its promise of the future contained within its alabaster buildings; the wheat fields of America's heartland Kansas, through which her train was riding on July 16; and the majestic view of the Great Plains from high atop Zebulon's Pikes Peak.

On the pinnacle of that mountain, the words of the poem started to come to her, and she wrote them down upon returning to her hotel room at the original Antlers Hotel. The poem was initially published two years later in The Congregationalist, to commemorate the Fourth of July. It quickly caught the public's fancy. Amended versions were published in 1904 and 1913.

Several existing pieces of music were adapted to the poem. A hymn tune composed by Samuel A. Ward was generally considered the best music as early as 1910 and is still the popular tune today. Just as Bates had been inspired to write her poem, Ward too was inspired to compose his tune. The tune came to him while he was on a ferryboat trip from Coney Island back to his home in New York City, after a leisurely summer day in 1882, and he immediately wrote it down. He was so anxious to capture the tune in his head, he asked fellow passenger friend Harry Martin for his shirt cuff to write the tune on, thus perhaps the off the cuff analogy. He composed the tune for the old hymn "O Mother Dear, Jerusalem", retitling the work "Materna". Ward's music combined with Bates' poem were first published together in 1910 and titled, America the Beautiful.[2]

Ward died in 1903, not knowing the national stature his music would attain, as the music was only first applied to the song in 1904. Bates was more fortunate, as the song's popularity was well established by her death in 1929.

When Richard Nixon visited China in 1972, this song was played as the welcome music.

The song is often included in songbooks in a wide variety of religious congregations in the United States.

O beautiful for spacious skies,
For amber waves of grain,
For purple mountain majesties
Above the fruited plain!

America! America!
God shed His grace on thee,
And crown thy good with brotherhood
From sea to shining sea!

O beautiful for pilgrim feet
Whose stern impassion'd stress
A thoroughfare for freedom beat
Across the wilderness.

O beautiful for heroes prov'd
In liberating strife,
Who more than self their country lov'd,
And mercy more than life.

America! America!
May God thy gold refine
Till all success be nobleness,
And ev'ry gain divine.

America! America!
God shed His grace on thee,
And crown thy good with brotherhood
From sea to shining sea.

Possibly the most notable current version of "America the Beautiful" is the setting for band and symphonic orchestra by the late arranger/conductor/composer Carmen Dragon. Performed thousands of times in recent years, Mr. Dragon's arrangement has been played for state occasions such as the memorial services for Presidents Ford and Reagan and at tribute concerts for events such as the Oklahoma City bombing and 9/11.

Popularity of the song increased greatly following the September 11, 2001 attacks; at some sporting events it was sung in addition to the traditional singing of the national anthem. During the first taping of the Late Show with David Letterman following the attacks, CBS newsman Dan Rather cried briefly as he quoted the fourth verse.[6]

Ray Charles is credited with the song's most well known rendition in current times (although Elvis Presley had success with it in the 1970s). Charles' recording is very commonly played at major sporting and entertainment events, such as the Super Bowl, and WrestleMania; Charles gave a live performance of the song prior to Super Bowl XXXV, the last Super Bowl played before the September 11 terrorist attacks. He places the third verse first, after which he sings the usual first verse. In the third verse (see above), the author scolds the materialistic and self-serving robber barons of her day, and urges America to live up to its noble ideals and to honor, with both word and deed, the memory of those who died for their country. He also performed the song on Red Sox opening day at Fenway Park in 2003, though the game was eventually rained out. A version with Alicia Keys was included in Charles' 2005 duets album Genius & Friends.

Symbolically, Marian Anderson (a noted opera singer of her day) sang a rendition of "America the Beautiful" on the steps of the Lincoln Memorial in 1939 after being refused use of Constitution Hall by the Daughters of the American Revolution because of her skin color.

In 2009, on her album Running for the Drum, Buffy Sainte-Marie released a new version of "America the Beautiful". Her version contained some new lyrics, as well as a small modification of the melody. This version includes only two verses, the second of which is original.

O beautiful for vision clear,
That sees beyond the years,
The nightime sky, our hopes that fly,
Undimmed by human tears.

America! America!
God shed His grace on thee,
'Til selfish gain no longer stain,
The banner of the free.

And crown thy good with brotherhood,
From sea to shining sea.

Wellesley students honor Bates with a version at graduation, substituting

And crown thy good with SISTERhood,
From sea to shining sea.

"From sea to shining sea" is an American idiom meaning from the Pacific Ocean to the Atlantic Ocean (or vice versa). Many songs have used this term, including the American patriotic songs "America, The Beautiful" and "God Bless the USA". In addition to these, it is also featured in Schoolhouse Rock's "Elbow Room". A term similar to this is the Canadian motto A Mari Usque Ad Mare ("From sea to sea.")