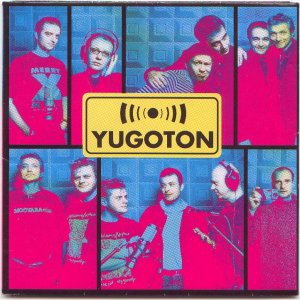 Last album =
This album =
Next album =

"Yugoton" is a released in by ZIC ZAC Music Company and Poland in 2001.

It features s of eminent artists from SFR Yugoslavia such as: , , , , and . Most of these artists were formerly involved in the scene. The songs including the main single from the Prljavo kazalište's "" album, are performed in Polish by the "Yugoton" feat. the Polish artists: , , , and others. The also has multimedia features for PC use.

The album is a to the former Yugoslav music scene. Even its very title is a nod to the Yugoslav record industry, specifically its largest and most prominent publicy owned , which was very popular among the youths behind the , including the , who couldn't travel freely to western countries and thus had difficulties accessing western music. One of their solutions around this was going shopping to the which was not an country, and as such was more opened to western influences. As a result, Yugoslav records gained a around Eastern Europe and became a sort of symbol of the western . Another reference to the Yugoslav records and Jugoton can be found in the film "" (which takes place in the former ), in the scene with the record .

Many of the former Yugoslav artists were touring Poland, which also developed a vibrant music scene including and as well as other genres with large . In 1981 the former Yugoslav band from released the song "Poljska u mome srcu" ("Poland in my heart") to boost the morale of the Polish people in their struggle against the of ; Električni orgazam from released the titled " '81" for Jugoton in 1982, while the prominent journalist and promoter organized a concert in in support of the Polish . Support to the Polish opposition was also expressed by many prominent foreign artists of the time, including for example the British punk rock band .

The ties between the former Yugoslav and the Polish scenes still exist. from Belgrade's Idoli and from the Zagreb-based Haustor were invited as guests to the "Yugoton" project. They are featured on the photo on the CD cover of "Yugoton" together with the Polish artists.

Another project in Poland was "Yugopolis".