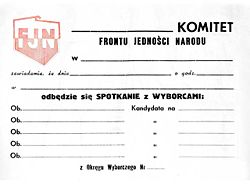 Front of National Unity or National Unity Front (Polish: Front Jedności Narodu, FJN) was a Polish communist political organization supervising elections in People's Republic of Poland and also acting as a coalition for the dominant communist Polish United Workers' Party (PZPR) and its allies.[1] It was founded in 1952 as National Front (Front Narodowy) and renamed to Front of National Unity in 1956.[1] It was the heir of the Democratic Bloc (Blok Demokratyczny) which ran in the elections of 1947 before the merger between communists and socialists.

The Front was created by and subordinate to the PZPR.[2] Its membership included all three legal Polish political parties (PZPR, Democratic Party (SD), United People's Party (ZSL)) and many organizations (such as trade unions).[2] During elections it had a near monopoly (varied depending on particular time) on registering candidates who had the right to participate in the elections;[1][2] it was de facto used by PZPR to ensure no real opposition candidate would be able to participate in the elections.[citation needed] In 1983 it was disbanded,[1] to be replaced by Patriotic Movement for National Rebirth (Patriotyczny Ruch Odrodzenia Narodowego, PRON).