Diplodocids, or members of the family Diplodocidae ("double beams"), are a group of sauropod dinosaurs. The family includes some of the longest creatures ever to walk the earth, including Diplodocus and Supersaurus, which may have reached lengths of up to 34 metres (112 ft).[1]

Diplodocus, depicted with spines limited to the mid-line of the back. 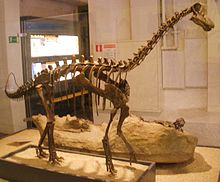 Cast of Toni, a juvenile diplodocid

While still massive, when compared to the titanosaurids and brachiosaurs, the diplodocids were relatively slender but extremely long. They had short legs, making them the "dachshund" of giant dinosaurs; and their rear legs were longer than front legs, giving their back a distinctive downward slope towards the neck. In the early 1990s, a diplodocid specimen was described with a row of keratinous (horny, not bony) spines running down the base of the tail. Further finds have shown that rather than forming a spiny ridge down the back (as in modern reptiles like the iguana), these spines were more uniformly distributed over the animal's torso. Since dermal tissue is rarely preserved in the fossil record it is not known how widespread the feature is, but spines may have been a common feature among diplodocids. 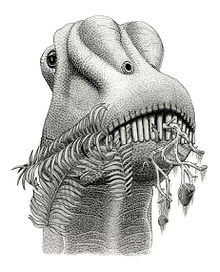 Like other sauropods, their heads were tiny with the nasal openings on the top of the head (though in life the nostrils themselves would have been close to the tip of the snout). Their teeth were only present in the front of the mouth, and looked like pencils or pegs. They probably used their teeth to crop off food, without chewing, and relied on gastroliths (gizzard stones) to break down tough plant fibers (similar to modern birds).

Diplodocids also had long, whip-like tails, which were thick at the base and tapered off to be very thin at the end. Computer simulations have shown that the diplodocids could have easily snapped their tails, like a bullwhip. This could generate a sonic boom in excess of 200 decibels, and may have been used in mating displays, or to drive off predators. There is some circumstantial evidence supporting this as well: A number of diplodocids have been found with fused or damaged tail vertebrae, which may be a symptom of cracking their tails.

Few skin impressions of diplodocids have been found. However, at least one significant find first reported by Stephen Czerkas in 1992 preserved portions of the skin from around the tip of the tail, or "whiplash".[2] Czerkas noted that the skin preserved a sequence of conical spines, and that other, larger spines were found scattered around larger tail vertebrae. The spines appeared to be oriented in a single row along the mid-line of the tail, and Czerkas speculated that this midline row may have continued over the animals entire back and neck.[3]

Diplodocidae was the third name given to what is now recognized as the single family of long-necked, whip-tailed sauropods. Edward Drinker Cope named the family Amphicoeliidae in 1878 for his genus Amphicoelias, sometimes considered a diplodocid.[4] However, the name Amphicoeliidae did not come into wider use and was not used in the scientific literature after 1899, making it a nomen oblitum ("forgotten name") according to the ICZN, preventing it from displacing the name Diplodocidae as a senior synonym. More recent studies have also shown that Amphicoelias itself does not belong to this family, but is instead a more primitive diplodocoid.[5] A similar situation occurred for the family name Atlantosauridae, named by Othniel Charles Marsh in 1877, and which Hay argued had priority over Amphicoelidae.[6] George Olshevsky declared Atlantosauridae a nomen oblitum in 1991, though scientists such as Steel and Nowinski had treated Atlantosauridae as a valid name as late as 1971, and the former even added a subfamily, Atlantosaurinae.[7][8]

Some dinosaurs have been considered diplodocids in the past but have not been found to be members of that group in later, larger analyses of the family's relationships. Australodocus, for example, was initially described as a diplodocid, but may actually have been a Macronarian.[9][5] Amphicoelias was traditionally been considered a diplodocid due to its similar anatomy, but phylogenetic studies showed it to be a more basal member of the Diplodocoidea.[5]

The relationships of species within diplodocidae has also been subject to frequent revision. A study by Lovelace, Hartman and Wahl in 2008 found that Suuwassea and Supersaurus were relatives of Apatosaurus, within the subfamily Apatosaurinae. However, subsequent analysis by Whitlock in 2011 showed that Supersaurus is slightly closer to Diplodocus than to Apatosaurus, and that Suuwassea is actually a primitive dicraeosaurid.[5]