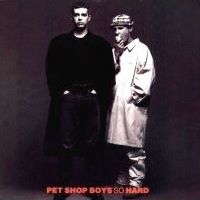 :"The capitalization of song titles in this article may be disputed. Please see the before making changes.

"So Hard" is a song by the British pop group the and was the first single lifted from the 1990 album "Behaviour". It peaked at #4 in the UK, and was the only single from the album to reach the Top 10. The song is about "two people living together; they are totally unfaithful to each other but they both pretend they are faithful and then catch each other out".

The video was directed by Eric Watson and filmed in Newcastle and . Filming locations included the Bigg Market, Newcastle , Railway Terrace in , , and the . The black and white video co-stars 's sister Anna Gascoigne.

"So hard" has been covered by Momus.

2. "It must be obvious" - 4:21:*Produced by Pet Shop Boys:*Mixed and engineered by - :*Additional programming by Dominic Clarke

* Labelled "The KLF versus Pet Shop Boys" single
* Tracks 1,2 remixed by The KLF