A hobble skirt [1] is a skirt with a narrow enough hem to significantly impede the wearer's stride, thus earning its name. A knee-long corset is also used to achieve this effect. A dress consisting of such skirt is called a hobble dress. 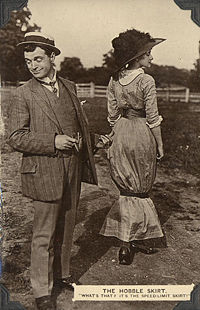 A postcard (circa 1911) depicting a man pointing at a woman wearing a hobble skirt. The caption says, "The Hobble Skirt: What's that? It's the speed-limit skirt!" as hobble skirts limit the wearer's stride.

Although restrictive skirts first appeared in Western fashion in 1880s, the term was first used in reference to a short-lived trend of narrow skirts in around 1910-1913. The Parisian fashion designer Paul Poiret is sometimes credited with the design, inspired by the widespread Oriental influence on Western culture, but in fact the extreme hobble skirt is an evolution of the narrowing skirt seen in fashion since the turn of the century. Poiret may also have been influenced by observing the behavior of Mrs. Hart O. Berg upon the first aeroplane flight she took in October 1908 with Wilbur Wright, whereon she tied a rope around the bottom of her skirt to keep it from blowing up during the flight. After Wilbur and Mrs. Berg landed she walked away from the plane undaunted, being seen to 'hobble' around until removal of the rope from her skirt.[2] [3]

To prevent tearing of the skirt when women attempted to walk in them, a fetter made of braid was sometimes worn around the skirt under the knees. There was also an elasticized band available that had two connected loops, one to be worn on each leg just blow the knee, underneath the skirt; this invention also kept women from taking too large of a stride and tearing the skirt fabric. A few women adopted a style of wearing little trousers with a "harem"-influenced design of full fabric that became snug at the ankles. These trousers were visible below the hem of the skirt, but they were considered too scandalous by most people, and few women persisted in wearing the style.[4]

The archives of The New York Times between 1910 and the beginning of the First World War contain many detailed accounts of the hobble skirt wearers of the era. It seems that some New York fashion houses may have asked their dressmakers to interpret too literally the slim styles depicted in Paris fashion illustrations. Many women and their admirers subsequently discovered the way of walking which such narrow skirts create, and the hobble skirt, impractical though it was, achieved tremendous popularity.

Although the term is sometimes used in reference to narrow ankle-length skirts in the early 1910s, some skirts of this period, although called hobble skirts, had slits, hidden pleats, and draping that lessened the restriction on a woman's ability to move freely, because in this period women were becoming more active in various activities which would have been impossible to do in a hobbled hemline. The most restricting extant styles from this period, which truly do hobble the wearer, are either evening wear or are found in wedding dresses when a woman was only required to take small measured steps down the aisle of a church.

Long tight skirts reappeared through the century in various forms, particularly in evening gowns, as well as daytime pencil skirts popular from the 1950s onwards. A more literal interpretation of hobble skirts became a mainstay in bondage-oriented fetish fashion, often made out of leather, PVC, or latex. For example, they were a regular topic in the 1950s John Willie fetish magazine, Bizarre.