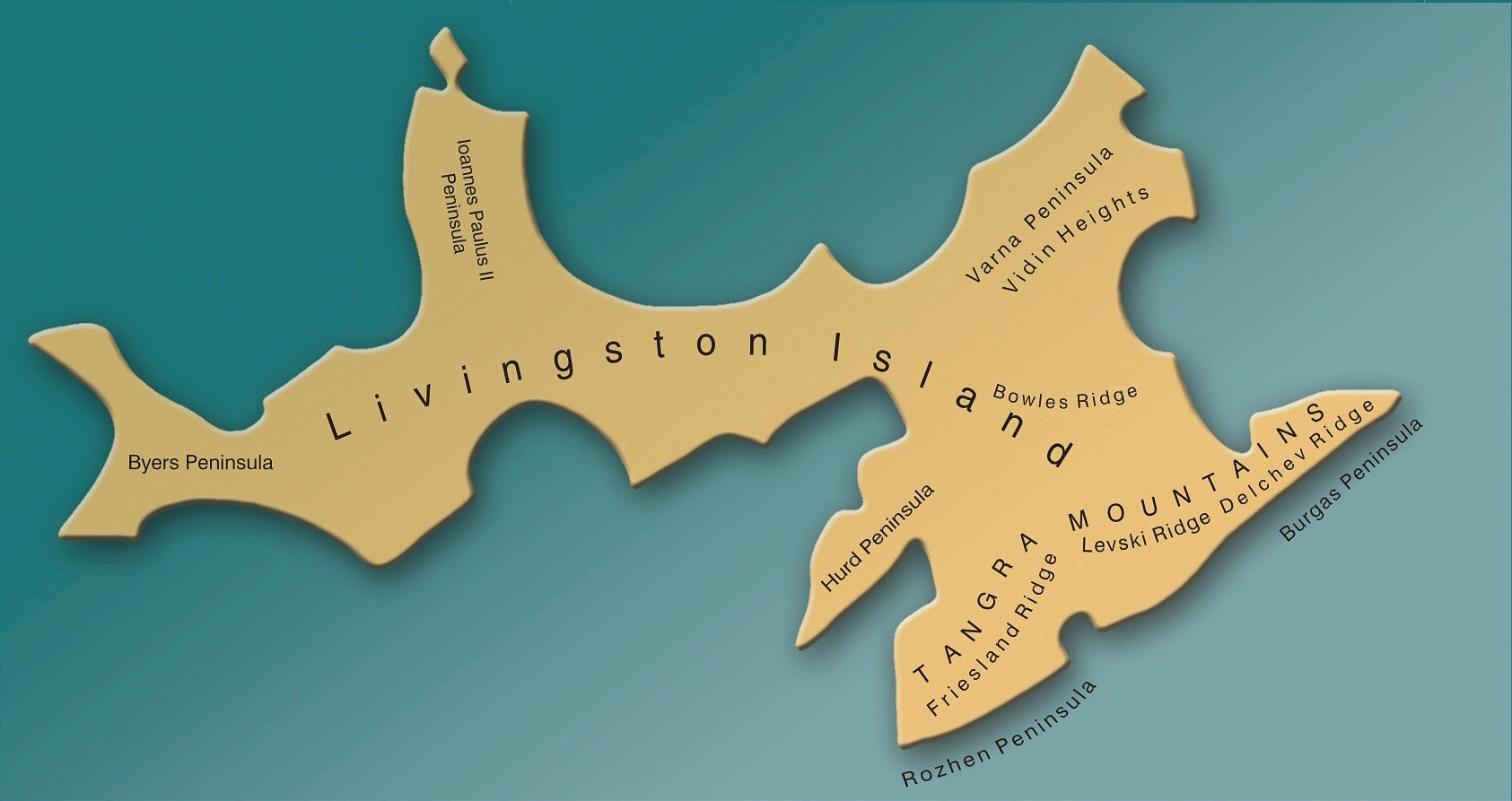 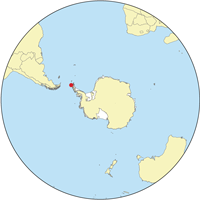 Livingston Island (coord|62|36|S|60|30|W|) is an Antarctic island in the , lying between Greenwich and s. This was known to sealers as early as 1819, and the name Livingston has been well established in international usage for over 180 years.

Livingston is situated in the 110 km to the northwest of Cape Roquemaurel on the Antarctic mainland, 830 km to the south-southeast of in , 820 km to the southeast of the (the southernmost land of ), 1000 km due south of the , 1600 km to the southwest of , and 3000 km from the .The Island is part of the archipelago, an islands chain extending over 500 km in east-northeast to west-southwest direction, and separated from the nearby by , and from by the . The cover a total land area of 3687 km² comprising (from east to west) Clarence Island, , , Nelson Island, , , Livingston Island, , , Low Island and Smith Island, as well as numerous smaller islets and rocks. Livingston is separated from the neighbouring to the east and to the west-southwest respectively by and by . , located barely 18 km southwest of Livingston’s in the , is a volcano whose forms the sheltered harbour of Port Foster entered by a single narrow passage known as Neptunes Bellows.

The Island extends 73 km from Start Point in the west to in the east, its width varying from 5 km at the neck between South Bay and to 34 km between to the south and to the north, with surface area of 974 km². There are many islets and rocks in the surrounding waters, particularly off the north coast. More sizable among the adjacent smaller islands are Rugged Island off , Half Moon Island in and Desolation Island in to the north.

Ice cliffs, often withdrawing in the recent decades to uncover new coves, beaches and points, form most of the coastline. Except for isolated patches the land surface is covered by an ice cap, highly crevassed in certain segments, with ice domes and plateaus in the central and western areas, and a number of valley glaciers formed by the more mountainous relief of eastern Livingston. Typical of the Island’s glaciology are the conspicuous ash layers originating from volcanic activity on the neighbouring .

The local variety of the weather is particularly changeable, windy, humid and sunless; says Australian mountaineer Damien Gildea: ‘Livingston got just about the worst weather in the world’. Whiteouts are common, and blizzards can occur at any time of the year. Temperatures are rather constant, rarely exceeding 3°C in summer or falling below –11°C in winter, with wind chill temperatures up to 5-10°C lower.

Below are the average temperatures of the warmest month, coldest month, yearly average, and the average annual rainfall of Livingston Island compared with some other locations

It was only in the Nineteenth century that any land was discovered in what today is ‘political’ , and that land happened to be Livingston Island. Captain William Smith in the English merchant brig "Williams", while sailing to in 1819 deviated from his route south of , and on 19 February sighted the northeast extremity of Livingston, .A few months later Smith revisited the to land on on 16 October 1819 and claim possession for Britain. In the meantime, a Spanish vessel had been damaged by severe weather in the and sunk off the north coast of Livingston in September 1819. The 74-gun "San Telmo" commanded by Captain Rosendo Porlier was the flagship of a Spanish naval squadron. The more than 600 men lost onboard the "San Telmo" were the first recorded people to die in . While no one survived, parts of her wreckage were found subsequently by sealers on Half Moon Beach, .

In December 1819 William Smith returned with his ship to the . This time he was chartered by Captain , British commanding officer in the stationed in , and accompanied by Lieutenant who was tasked to survey and map the new lands. On 30 January 1820 they sighted the mountains of the , unaware that three days earlier the continent had already been discovered by the Russian Antarctic expedition of Fabian Gottlieb Thaddeus von Bellingshausen and Mihail Lazarev.One year later, the Russians had circumnavigated Antarctica and arrived in the region in January 1821 to find over 50 American and English sealing vessels and 1000 men taking hundreds of thousands of fur seal skins. While sailing between and Livingston (named by the Russians) Bellingshausen met the American Captain , yet another pioneer of Antarctic exploration who himself had sighted the mainland in the previous November. Remains of huts and sealer artefacts are still found on Livingston, which possesses the second greatest concentration of historical sites in (after South Georgia). The names of many geographical features on the Island also refer to its early history. Among the commemorated are ship captains such as the Americans Christopher Burdick, Charles Barnard, Robert Johnson, Donald MacKay, Robert Inott, David Leslie, Benjamin Brunow, Robert Macy, Prince Moores and William Napier, the Britons William Shirreff, M’Kean, John Walker, Ralph Bond, Christopher MacGregor, T. Binn and William Bowles, the Australian Richard Siddons, people like the New York shipowner , the American whaling merchants William and Francis Rotch, British Admiralty hydrographer Thomas Hurd, and John Miers, publisher of the first chart of the based on the work of William Smith, or sealing vessels like "Huron", "Williams", "Samuel", "Gleaner", "Huntress", "Charity", "Hannah", "Henry", "John", "Hero" and others. Some of the place names given by the Nineteen Century sealers are descriptive, such as , and , hazardous places where ships and people were lost; , , or the where American sealers were robbed of their sealskins by the British. However, names like Livingston, and also go back to the first few seasons after the discovery of the islands yet their particular origins remain unknown.

The permanent scientific bases of Juan Carlos I () and St. Kliment Ohridski () were established in 1988 at South Bay. Other base facilities are the small (or Guillermo Mann, and the ) on since 1991, and the inactive base Cámara () on Half Moon Island since 1953. Occasional field camps support research in remote areas of the Island. () operates regularly near on Byers Peninsula, and the site situated at elevation 541 m in upper , area served as a base camp of the topographic survey. is accessible by 11-12.5 km routes from St. Kliment Ohridski and Juan Carlos I respectively, and offers convenient overland access to to the south; , , and areas to the north; to the east; and and to the west. was named for the in appreciation of Academy’s contribution to the Antarctic exploration, and has been designated as the summer post office Tangra 1091 of the since 2004.

In order to protect Antarctica the system enforces a strict general regime regulating human presence and activities on the continent, and designates certain protected territories where access is allowed only for scientific purposes, and with special permission.

There have been two such s on Livingston Island since 1966, comprising respectively the extensive , and the small peninsula of together with and adjacent waters.

Subject of protection are the fossils demonstrating the link between Antarctica and other austral continents, a variety of abundant flora and fauna including colonies of seals and penguins that are the subject of scientific study and monitoring, as well as numerous historical monuments dating from the Nineteenth century.

Antarctic shipborne was initiated in 1958 in the . Since then the number of tourists visiting has grown to tens of thousands annually, of whom over 95% tour the and the nearby . on the south coast of Livingston and Half Moon Island off the east coast, as well as the nearby and the near are among the most popular destinations frequented by s, offering walks amidst spectacular scenery and amazing .