The Museum of Curiosity

The Museum of Curiosity

The Museum of Curiosity, formerly titled The Professor of Curiosity,[1] is a comedy panel game on BBC Radio 4 that was first broadcast on 20 February 2008.[2] It stars John Lloyd as "The Professor of Ignorance at the University of Buckingham" and owner of the fictional "Museum of Curiosity". In the show a panel comprising three guests - typically a comedian, an author and an academic - attempt to donate a range of objects that they personally find curious to the museum.

Bill Bailey acted as co-host of the programme in the first series,[3] under the title of curator of the museum. Bailey left the show after he initially decided to "retire" from panel games,[4] and was replaced by Sean Lock in the second series. Each subsequent series has seen a different comedian take over as the sidekick-curator, with Jon Richardson and Dave Gorman assuming the role in the third and fourth series respectively. (Gorman also stood in for Richardson for one edition of the third series after the latter was left stranded due to the volcanic eruption of Eyjafjallajökull.)

The departures of previous curators are explained with bizarre claims. It was said that Bailey had been headhunted by the Cumberland Pencil Museum,[5] while Lock was apparently attempting to locate and remove a mustard seed that had been accidentally placed in the room intended to contain nothing (submitted by Frank Close in series 1).

The programme has often been compared to the television panel game QI. Both were co-created by Lloyd, several of the Museum's 'curators' and comic guests have appeared regularly on QI and the QI Elves receive a credit for providing some of the research. As a result, some critics consider the radio show to be a spin-off of the TV programme.[3] [6] Some have ventured that The Museum of Curiosity is not as good as its forerunner.[7] However, most reviewers are positive about the show.[8][9]

In series one, the programme began with Bailey introducing the show, playing the theme tune to the programme in a slightly different way in each episode. Subsequent series have the theme tune played normally. The host/professor and the curator/sidekick introduce themselves. They then give a short guide to the museum, before introducing the "advisory committee", a guest panel made up of a mixture of celebrities and academic experts, with Lloyd reading out their CVs.[5]

Afterwards, each member of the committee attempts to donate something to the museum. The donation can be anything, no matter how large, expensive, intangible, or possibly nonexistent. Examples of donations include a yeti,[10] the Battle of Waterloo,[11] and absolutely nothing.[12] Lloyd and the curator decide whether it is worthy to enter the museum. In series one, the programme ended with Lloyd and Bailey looking through the audience's suggestions for things the museum could exhibit or asking the audience curious questions. Bailey then finished by giving a humorous comment on a Bertrand Russell quote. Both of these ideas were dropped in series two.[5]

The series was first recorded as a pilot in 16 April 2007 called The Professor of Curiosity, in which the guests were Alastair Fothergill, Victoria Finlay and Simon Munnery. This pilot, recorded at the Rutherford Room at the institute of Physics, has yet to be broadcast.[13] The first series was recorded at the Pleasance Theatre in Islington and the second at the BBC Radio Theatre.[13] The series was co-created by Lloyd, Richard Turner and Dan Schreiber. Turner and Schreiber are the producers of the show. The show's researchers are James Harkin, Xander Cansell (for series one) and Molly Oldfield (from series two onwards).[3][13] 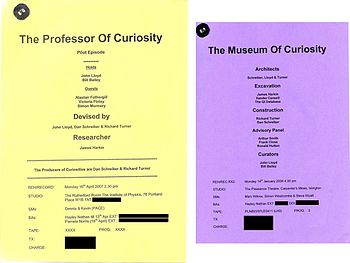 The front covers of the scripts for The Professor of Curiosity and episode three of The Museum of Curiosity.

Reaction to the series was mixed. Phil Daoust in The Guardian described the show as being "unusual" and "eclectic".[22] Chris Campling, who wrote a preview of the first episode, highlighted it in his "Radio Choice" column for The Times.[8] Gillian Reynolds highlighted the programme as one of her radio choices in the Daily Telegraph.[23] Rosanna Chianta in Scotland on Sunday compared the show positively to QI, also created by Lloyd,[24] while Frances Lass from the Radio Times said it was better than it claiming it was, "QI with even more jokes. Made me bark with laughter",[25] that, "Lord Reith would be so proud" and the programme was, "Pornography for the brain!"[26]

Miranda Sawyer of The Observer criticised the show, saying that, "it's no QI, because the joy of that programme rests almost entirely in the host, Stephen Fry, and his subversion of the prissy, clever character we're familiar with (in QI, Fry is clever, but relaxed). The Museum of Curiosity is presented partly by Bill Bailey and mostly by John Lloyd, producer of QI (are you getting a theme?). Lloyd may well be a nice chap, but we haven't a clue who he is, and, on the evidence of this, he isn't a big or witty enough character for us to feel desperate to get to know him."[7]

Nicholas Lezard in The Independent on Sunday was lukewarm about the show, saying it "more or less worked." He wrote:

I try to envisage the pitch. Imagine if you or I went up to the Head of What Goes Out at 6.30 on Radio 4 and said: "It's a show where we ask guests to bring along an item of interest for us to put in an imaginary museum. They get to tell us some anecdotes, and we make the odd quip." The Head of What Goes Out at 6.30 on Radio 4 puts the tips of his fingers together and says: "Is that it?" "Well, basically, yes." "And will your guests be famous?" "Well, we thought for the first show we'd have Brian Blessed, who is an enormous pain in the arse but undoubtedly very well known; a comedian not too many people have heard of like, say, Sean Lock, and then we'd have a completely off-beam choice, perhaps Richard Fortey, who is a world expert on trilobites and a member of the Royal Society." This sounds a bit mad, no? As I said, if you or I pitched this idea we'd hardly have time to eat our free BBC biscuit before being shown the door. But as the hosts are Bill Bailey and John Lloyd (who had the idea for, among many other things, QI), then they get the green light. Good for them.[6]

Kate Chisholm in The Spectator commented positively: "I've at last found myself laughing at a Radio Four comedy programme, transforming that 6.30 graveyard slot, which in recent years has become synonymous with smutty jokes and banal innuendo, into something a little different. The Museum of Curiosity (Wednesdays) is a bit like Paul Merton's Room 101, but without the ego."[9]

Elisabeth Mahoney in The Guardian was critical of the second series. While praising the discussion between the guests as, "funny and flowing, and quite endearingly quirky", she also said: "But, peculiarly, the programme fizzled away when it reached what ought to have been its crux: the donation of kooky items to the imaginary museum. Instead, we had a reminder of what they were, and then a sudden ending that was both limp and abrupt."[27]