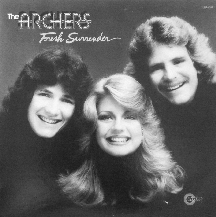 "Fresh Surrender" was The Archers fourth studio album and third [http://www.bsnpubs.com/word/light.html Light Records Discography] release. It and its title song were nominated for a (GMA) , and claimed an astounding seven airplay hits for the stars. [http://pages.prodigy.net/steveund/archers/home.htm] Perhaps more importantly it signaled a marked change for the band, both in sound and appearance. It was recorded on the departure of two founding-members, and Nancye Short-Tsapralis who had been linchpins in the creation of the group’s sound and writing team for six years. Now a trio with sister, Janice Archer, who had been traveling with the combo for some time, The Archers took off in a new direction that would define them for the rest of their career. The project was arranged by 's original , who went on to co-produce The Archers' next album, "Stand Up!" also released by Light Records.Once again, the band was joined in the studio by an elite group of Los Angeles recording musicians, including alumni Ben Benay, , , , , , and .