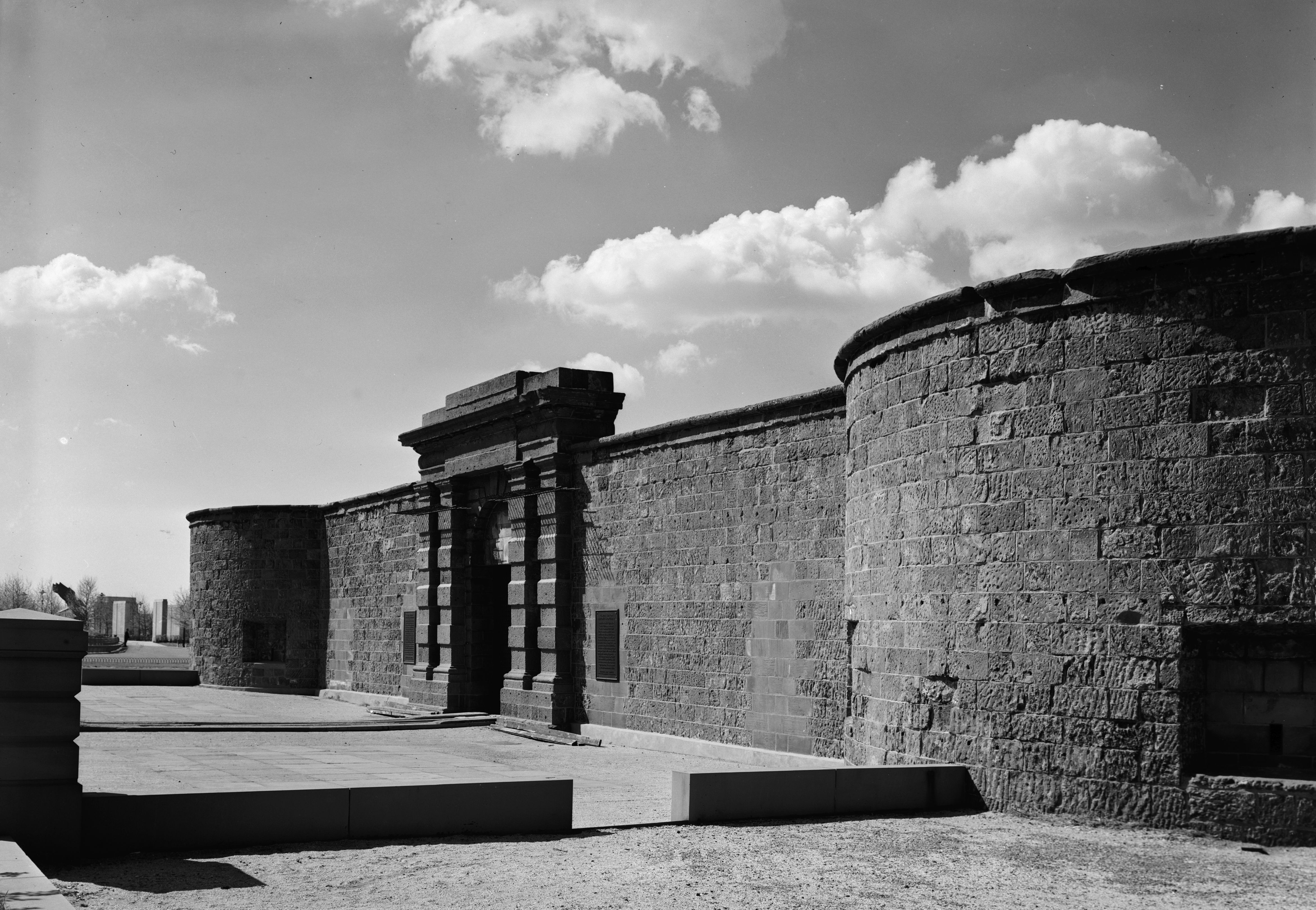 Castle Clinton or Fort Clinton was once a circular sandstone now located in Battery Park at the southern tip of , , in the . It subsequently became a , a , the first immigration station (predating ), a very popular public , and finally a national monument.

Construction began in 1808 and was completed in 1811. The fort, known as West Battery (sometimes South-west Battery), was designed by and Jonathan Williams. It was built on a small artificial just off shore.

West Battery was intended to complement the three-tiered (still extant) on , which was "East Battery", to defend New York City from British forces in the tensions that marked the run-up to the , but never saw action in that or any war. Subsequent expanded Battery Park, and incorporated the fort into the mainland of Manhattan Island.

As with all historic areas administered by the , Castle Clinton National Monument was listed on the on , .

*Castle Clinton today is approximately two blocks west of where stood almost 400 years ago, when New York City was still known by the Dutch name .
*West Battery was renamed Castle Clinton in 1815, its current official name, in honor of New York City .

*The US Army stopped using the fort in 1821 and it was leased to New York City as a place of public entertainment and it opened as Castle Garden on , , a name by which it was popularly known for most of its existence, even to the present time. It served in turn as a , /, , , and theater. Designed as an open-air structure it was eventually roofed over to accommodate these uses.

*In 1850, the castle was the site of two extraordinarily successful concerts given for charity by the Swedish to initiate her American tour, managed by .

*In 1853 and 1854, the famous and very eccentric French conductor and composer of light music (1812-1860) gave dozens of very successful concerts mixing classical and light music.

*In 1855, it became the Emigrant Landing Depot as the State immigrant processing facility (the nation's first such entity) until 1890, when the Federal Government took over control of immigration processing, and opened the larger and more isolated facility for that purpose in 1892. Most of the immigration records burned in a pier fire during the transition to Ellis Island, but it is generally accepted that over 8 million immigrants (and as many as 12 million) were processed through Castle Garden. Prominent persons that were associated with the administration of the immigrant station included Gulian C. Verplanck, , and .

*In 1896, Castle Garden became the site of the until 1941. For many years it was the city's most popular attraction, attracting hundreds of thousands of visitors a year. The structure was extensively altered and roofed over to a height of several stories, though the original fort remained.

*In 1941 the politically powerful Park Commissioner wanted to tear the structure down completely, claiming that this was necessary to build a crossing from the Battery to Brooklyn. The public outcry at the loss of a popular recreation site and landmark stymied his effort at demolition, but the aquarium was closed and not replaced until Moses opened a new facility on in 1957. "See Brooklyn-Battery bridge". [Author: Caro, Robert A. The power broker: Robert Moses and the fall of New York. New York, Knopf, 1974. ISBN 0-394-72024-5 ]

Although Castle Garden was designated a national monument on , , the law did not take effect until , , when the legislature and the governor of New York () formally ceded ownership of the property to the Federal Government. A major rehabilitation took place in the 1970s. Today it is administered by the and is a departure point for visitors to the and . It appears much as it did in its earliest days, contains a , and is again called Castle Clinton.

* The Irish music group ' 1993 album contains a tune called "Goodbye Mick" with the farcical line "For the ship will play with pitch and toss--for half a dozen farthings, I'll roll me bundle on me back, and walk to Castle Gardens."