Mayo College is a public school founded by the 6th Earl of Mayo, who was Viceroy of India from 1869 to 1872.

The school is located in Ajmer, in the state of Rajasthan, India.

With a view to providing the leaders of the princely states with an education to British standards the British Raj built a school to give education to the Indian elite, particularly the princes and nobles of Rajputana.

The idea for the college was proposed on May 28, 1869 by Colonel Walter. The school was founded in 1875 and Colonel Sir Oliver St John became its first Principal.[1]

The founder's intention was to create an Eton of India. The 1st Earl of Lytton, Viceroy of India, said in a speech on campus in 1879:

"The idea was well expressed long ago by Colonel Walter in an excellent and most suggestive report which may have influenced Lord Mayo when he founded the present college. In that very sensible report Colonel Walter pointed out that what was then most needed for the education of India’s young rulers and nobles was an Indian Eton. Ajmer is India’s Eton and you are India’s Eton boys."[2]

Mayo College is one of the oldest Private Boarding Schools in India and is considered amongst the best boarding schools in the country.[3][4]

Students refer to themselves as Mayoites and alumni as Old Boys.

Mayo College has an exchange programme for students to travel overseas to enrich their studies. 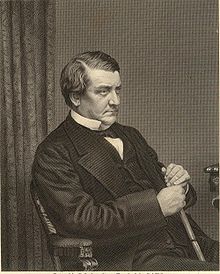 The school was founded by Richard Southwell Bourke, Earl of Mayo, and Viceroy of India from 1869 to 1872 known popularly in India as Lord Mayo. Bourke was born on February 21, 1822 and died on February 8, 1872. 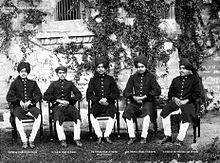 Mangal Singh from Alwar was the first student to be admitted to the institution in October 1875. The second student was Mahatab Singh of Nindar.

A number of Principals have guided the schools since its founding, but the most noteworthy is J. T. M. (Jack) Gibson, Principal from 1954–1969, who gave Mayo College its post-independence identity by hiring young faculty, upgrading the curriculum, and persuading families other than the nobility of Rajasthan to send their sons to the school.[5][6]

Near the time of the institution's inception by the British, the college’s students normally proceeded to Oxford or Cambridge universities after being groomed on how to behave like `British gentlemen’.[7]

The Main Building of Mayo College was designed by Major Mant in the Indo Saracenic style popularised by Sir Samuel Swinton Jacob, the State Engineer of Jaipur. For the construction of the Mayo College Main Building, several designs were submitted in the Indo-Saracenic, Grecian and Kolhapur styles by architects but Major Mant's Indo-Saracenic design was adopted by the Viceroy in June 1875.

The construction of the white marble building of the college began in 1877 and was completed in 1885. Major Mant's design became well known as a classic symbol of Indo-Saracenic architecture and is quoted in architectural courses today. 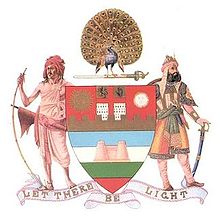 This was composed from the design furnished by Mr. Lockwood Kipling, a former Principal of the School of Arts, Lahore and father of the famous Rudyard Kipling.

In the Upper Centre of the Shield are Mayo Arms, and Quarterings, a Lion Rampant and an Open Hand.On the right and left are the Sun and the Moon, typical of Suryawanshi and Chandrawanshi, the two great families of Rajputs. Below are the Panch Rang, the five sacred colours of the Rajputs, Red, Gold, Blue, White and Green. In the centre of which is a Rajput fort - two towers connected by a curtain. The Supports are on the right, a Bhil warrior with string bow and quiver full of arrows. On the left a Rajput, armed at all points, wearing a steel helmet with three plumes, a shield on his back, a dagger and Qatar in his belt, and a suit of chain covered with embroidered cloth and gauntlet on his hand.

The motto is " Let there be Light ". The badge is a peacock, the sacred bird of Rajputana, standing on a two edged, two handed Rajput Sword Khanda.

On April 12, 1986, the post and telegraph department of the government of India released a special stamp of Mayo College with the Main School building on its face recognizing the school's role in the field of education.[8]

Mayo College is home to the Danmal Mathur Museum housed in Jhalawar House, which it shares with the Arts School. The college museum showcases priceless antiques and an armoury section. The museum is considered to have one of the best collections of any school museum in the world.[9]

History and traditions of Mayo College

Mayo College has become a known name for its diverse publications. Students and teachers have together built a strong line-up of publications in this school which are not only supplied internally, but also sent to other public schools in India and abroad. Here are some notable publications of Mayo College.

Mayoor was established in the late 1960s by the then Principal of Mayo, Mr. Jack Gibson. It is now a major bi-monthly newsletter of Mayo College featuring all College news, updates, and photos. The editorial team of Mayoor consists of an Editor-in-Chief who is an English teacher of the school and a team of editors from the student community. Mayoor used to have a Hindi section inside it which featured Hindi articles and poems. This was later removed when an independent Hindi newsletter called Paridrishya was established in 2006.

The Mayo Mail is a weekly newsletter of Mayo College. It was established in 2008 by a group of students of Grade - 7. It has now become a successful publication which prints 4 fresh sheets every week and is rightly called the 'newspaper' of Mayo College. The Mayo Mail consists of write-ups on school happenings and some fun filled activities like the trademark Mayo 'Tweets' and Mayo 'Howlers'.It is made by the students and for the students. It can be viewed online at www.themayomail.co.cc

Reflection is, right from its establishment in 2007, called the Student Magazine. It is rectangle shaped magazine that is filled with poems, articles and facts which are illustrated with vibrant colours and pictures. Reflection is another student-run magazine that comes out 3 times every year.

The College Magazine is an annual collection of all happenings of that particular year in Mayo College. It has English and Hindi sections and contains reports, speeches, photographs, poems, articles, and case studies of the school.

Euphoria: Euphoria is an annual publication which reports on the activities happening in the Prize Giving function of the school.

Zephyr - An Anthology of Poems: This is an annual publication which comes out in the Prize Giving and contains the best poems written by the students.

Alumni of Mayo College are known as Old Boys and are sometimes referred to as Old-Mayoites.

A number of students come to Mayo from overseas, including members of royal families from Oman and Nepal. The school has educated two Sultans of Oman, one of which is the current Sultan's father - Sayyid Said bin Taimur and the Late Princess Shruti of Nepal.

Many Old Boys from Mayo have served with distinction in the Armed forces and many others serve the country as Members of Parliament and senior Civil Servants. Jaswant Singh is one of the few Indian politicians to have been the Minister for Defence, Finance and External Affairs and K. Natwar Singh of the Indian Foreign Service served as India's Ambassador to Pakistan and as External Affairs Minister. Old Boys have also served as Indian Ambassadors to Morocco, Spain, Norway, Brazil, Libya, Switzerland and France.

Old Boys have also made their mark in commerce and industry and in science and technology. The Vice Chairman of Tata Motors, Ravi Kant, erstwhile Chairman of Shell Oil-India, Ajay Mehta, erstwhile Chairman Emeritus of Nestle-India, Narendra Singh of Sarila, former Chairman of Air India & Indian Airlines, Probir Sen, erstwhile Chairman and MD of Axis Bank, P.J. Nayak, Member of the Bank of England Monetary Policy Committee, Sushil Wadhwani, the retired Chief General Manager & Executive Director of the Reserve Bank of India & erstwhile Managing Director of NABARD, Yashwant Thorat, as well as Rakesh Mohan, who served as Deputy Governor of the Reserve Bank of India, Swarnendu Kumar Biswas, Executive-Trainer & Coach, HR/Business Consultant - have all schooled at Mayo. Mayo has also produced academic economists like Alok Bhargava who researches on food policy issues in developing countries and in developed countries for formulating public policies. Mayo has produced distinguished scientists such as the world renowned scientist in the field of electronic materials, Amit Goyal.

The school has produced a number of sportsmen including Charu Sharma, Cricketer Arun Lal and Lokendra S. Ghanerao (who captained India at Polo).

The J. T. M. Gibson Award for Excellence was created in 2007 to be given to old boys who have, consistent with Jack Gibson's ideals, made a difference to society. Honorees are: