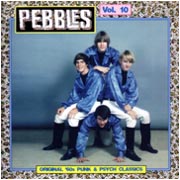 This album was released on in 1996 as #AIP-CD-5027. Despite the similar catalogue number, there is no relation between the tracks on this CD and the tracks on the corresponding LP. This represents the first appearance on CD of any of these songs.

This CD begins with the opening track from the "Pebbles, Volume 11" LP by the mysterious Milan; a second track that was not among the three Milan songs on that LP, " On the Go" is also included. "I Can't Stand this Love, Goodbye" is the outstanding, opening track on the first Pebbles CD, "Pebbles, Volume 1", released by (not ) in 1989. were already known as by this time – and had also released a single as – and would eventually become . The Spirit were forced to change their name by the California band Spirit, although they had been using it longer. is an early effort by and before their successes a little later in the decade. The second, unreleased single by closes out the album; their classic first single, "Blackout of Gretely" was a bonus track on the "" CD.