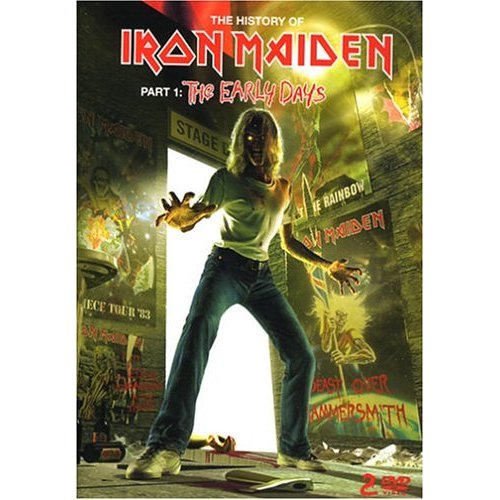 
"The Early Days" set features an exhaustive, thoroughly complete history of the early years of , from their humble beginnings in London's East End in 1975 through their triumphant "Piece of Mind" album and tour in 1983. The set features a large collection of rare videos and concert footage, as well as interviews with former members such as , , , , , and .

* The "Live in Dortmund" concert is missing the band's performance of "Iron Maiden," which was cut from ZDF TV's original broadcast as it was deemed "too violent." At the end of the performance, the band "mutilated" Eddie - first, with ripping his brain pieces out, followed by the other members kicking him on the ground until finally, Dave Murray smashed his then-favorite on him. [ [http://www.maidenfans.com/imc/?url=video14_earlydays/video14_earlydays&lang=eng&link=videos#dortmund The Iron Maiden Commentary ] ]

* Videotaped by a friend of Steve Harris, "Live at the Ruskin Arms" is the earliest video coverage of the band performing live. [ [http://www.maidenfans.com/imc/?url=video14_earlydays/video14_earlydays&lang=eng&link=videos#lockup The Iron Maiden Commentary ] ]

* The band's performance of "Running Free" on the German show "Rock and Pop" was one of a handful of lip-synched performances, as the band prefers to perform live.

* "Remember Tomorrow" was also performed when the group made their appearance on the "Rock and Pop". The reasons why it was dropped for the DVD are unknown. Also, on the special "Heavy: The Story Of Metal", an excerpt of the performance of "Running Free" from the group's appearance on "Rock and Pop" was shown but instead has a bit of a more cleaner quality than the one found on the DVD.

"Sequel" - Somewhere Back in Time

During Iron Maiden's "A Matter of Life and Death" world tour, Bruce Dickinson mentioned that Maiden would be "bringing back the 80's Egyptian thing in 2008" (apparently referring to their "Powerslave" album). This referred to a "sequel" to the 2005 "Early Days" Tour and this DVD, which was in line with earlier comments that there would be a tour with songs from the "Powerslave" to "Seventh Son of A Seventh Son" era albums. This tour that Iron Maiden is currently on is called The . Part 2 of The Early Days is now in disc 2 of the "Live After Death" DVD.