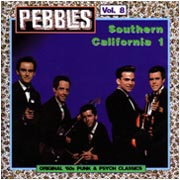 "Pebbles, Volume 8" is a among the CDs in the ; it is subtitled Southern California 1. The next CD in the series, "Pebbles, Volume 9" also feature bands from ; while "", "", and "" showcase music from specifically.

This album was released on in 1996 as #AIP-CD-5025. Despite the similar catalogue number, there is no relation between the tracks on this CD and the tracks on the corresponding LP.

are highly regarded in the community; this is the "A" side of their fourth single. Other Dovers songs were included on the first two LPs in the . "I Never Loved Her" by is one of the most valuable garage rock singles. ' "Won't Get Far" is included on the "Pebbles, Volume 9" CD.