Infobox Film
name = Around the World in 80 Days 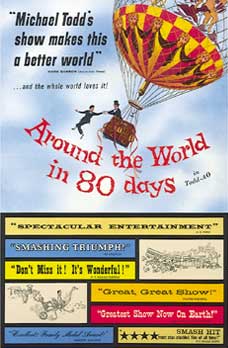 "Around the World in 80 Days" is a 1956 made by the Michael Todd Company and released by . It was directed by Michael Anderson and (uncredited) and produced by Michael Todd with and as associate producers. The was by , and based on the classic novel of the same name by . The music score was by and the cinematography by .

It was a big budget movie, shot in producer 's pioneering 70mm system to provide the highest-available picture resolution and sweeping vistas.

“Around the World in 80 Days” was an epic film. It was produced by the flamboyant Mike Todd, who hadn’t produced a movie before that time, but had produced stage plays; Todd was a showman. Todd had previously worked on the Cinerama movies, which used three cameras, three strips of film and three projectors; Todd was one of the partners in the Cinerama company. (Later he was a partner, with Lowell Thomas, in Thomas-Todd Productions.) He hired a director who hadn’t previously directed a movie, Michael Anderson. The film is based on the famous Jules Verne novel.

The filming was done in late 1955, form Aug. 9 to Dec. 20; they worked fast (75 actual days of filming). They produced 680,000 feet (128 miles) of film, which was edited down to convert|22000|ft|m of finished film. The film used the Todd-AO process, developed by Mike Todd and American Optical. It was developed as an improvement over the amazing Cinerama process. (The improvements were: a single camera, a single projector and a single strip of film.) They used 70 mm. film, which contained 65 mm. images; 5 mm. was used for the six sound tracks. A special projector was required to view Todd-AO films. The images were compressed on film and expanded to fill the nearly-semicircular screen. The process was used for many films, including “Oklahoma”, “The Sound of Music” and “Those Magnificent Men and Their Flying Machines.” The process is no longer used. (One reason may be the cost of a Todd-AO print, $12,000 vs. $2,000 for a conventional 35 mm. print.) The picture cost just under $6 million to make. They used 140 locations, 100 sets and over 36,000 costumes. Todd said he and the crew visited every country portrayed in the picture (including England, France, India, Spain, Thailand and Japan). The film was released on Oct. 17, 1956 for a NYC premiere, at the Rivoli theater. Todd said the film got 70 to 80 awards, in all. It received five Academy awards, including Best Picture and Best Musical Score. The picture grossed $100 million world-wide, including about $25 million in the U.S (theater grosses).

The movie included over 40 stars, besides David Niven, who played the lead, Phileas Fogg.The Mexican actor, Cantinflas, played his co-star, Passepartout, Fogg’s assistant. Both of these actors have died. Niven, who was British, died in 1983, from ALS. He wrote an autobiography, The Moon’s a Balloon. A biography of Mike Todd also exists.

There are other interesting facts about the film. 10,000 extras were used in filming the bullfight scene, with Cantinflas as the bullfighter, in Spain; Cantinflas had previously done some bullfighting. They used all 6500 residents of the small spanish town named Chinchón, 45 km away from Madrid, but Todd decided there weren’t enough spectators. So he found 3500 more, from nearby towns. Todd also used over 6000 buffalo for a stampede scene. He used 650 Indians, for a fight with white people on a train, in the West. Many of the 650 were Indians, but some were extras, from L.A. All 650 had their skin color altered, with some kind of dye. Todd used about 50 gallons of orange-colored dye for those extras. Todd sometimes used models of boats, ships and trains in the film. But he often decided that they didn’t look realistic, so he switched to the real thing, where he could. The scene of a collapsing train bridge in the film may be authentic, without models. A tunnel was built for one of the train sequences out of paper mache. After the train filming was complete, the ”tunnel” was pushed over into the gorge. It may still be there.

Many of the balloon scenes, with Niven and Cantinflas, were filmed using a convert|160|ft|m|sing=on crane. Even that height bothered Niven, who was afraid of heights. Tom Burges, who was shorter than Niven, was used as a stand in for scenes where the balloon is seen from a distance. Many of the lots used in the film are now on the land occupied by Century City, an office complex in the L.A. area.

The title credits are shown at the end of the film. They are an animated sequence that lasts about seven minutes.

The DVDs for “Around the World…” include four hours of supplemental material, in addition to the (apparently restored) three-hour wide-screen color film. The above comments are summarized from the three-hour audio narrative that describes the film. Also included on one of the disks is a documentary film, about 50 minutes long, about Mike Todd.

Around 1872, an English gentleman Phileas Fogg () claims he can circumnavigate the world in eighty days. He makes a PS£20,000 wager with several skeptical fellow members of his gentlemen's club, the , that he can arrive back within 80 days before exactly 8:45 pm.

Together with his resourceful valet, Passepartout (Mario Moreno "Cantinflas"), Fogg sets out on his journey from via a . Meanwhile, suspicion grows that Fogg has stolen his £20,000 from the Bank of England. Police Inspector Fix () is sent out by Ralph the bank president () to trail and arrest Fogg. Hopscotching around the globe, Fogg pauses in , where Passepartout engages in a comic bullfight. In , Fogg and Passepartout rescue young widow Princess Aouda () from being forced into a funeral pyre so that she may join her late husband. The threesome visit , , , and the Wild West. Only hours short of winning his wager, Fogg is arrested upon returning to London by the diligent, yet misguided Inspector Fix.

At the jail, the humiliated Fix informs Fogg that the real culprit was caught in . Though eventually exonerated of the charges, he has lost everything — except the love of the winsome Aouda. But salvation is at hand when Passepartout realizes the next morning that, by crossing the , they have gained a day. There is still time to reach the Reform Club and win the bet. To the surprise of all waiting at the club, Fogg arrives just before the clock's chime at 8:45 pm, even Aouda and Passpartout arrive. Noticing Fogg's whole travel party is here, Ralph announces the end of the journey.

One of the most famous sequences in the film, the flight by , is not in the original Jules Verne novel, and it is quite likely that modern-day readers of the novel have been disappointed at not finding it in the book. Because the film was made in , the sequence was expressly created to show off the locations seen on the flight, as projected on the giant curved screen used for the process.

The movie boasts a huge cast, with and Mario "Cantinflas" Moreno in the lead roles of Fogg and Passepartout. Fogg is the classic Victorian gentleman, well-dressed, well-spoken, and extremely punctual, whereas his servant Passepartout (who has an eye for the ladies) provides much of the comic relief as a "jack of all trades" for the film in contrast to his master's strict formality. Joining them are as Princess Aouda and as the detective Fix, which would turn out to be his last role.

The role of Passepartout was greatly expanded from the novel to accommodate Cantinflas, the most famous Latin-American comedian at the time, and winds up the focus of the film. While Passepartout describes himself as a Parisian in the novel, this is unclear in the film -- he has a French name, but speaks Spanish when he and his master arrive in Spain by balloon. There is also a comic bullfighting sequence especially created for Cantinflas that is not in the novel. Indeed, when the film was released in non-English speaking nations, Cantinflas was billed as the lead (according to the guidebook describing the movie, this was done because of an obstacle Todd faced in casting Cantinflas, who had never before appeared in an American movie and had turned down countless offers to do so. Todd allowed Cantinflas to appear in the film as a Latin, "so", the actor said himself, "to my audience in , I'll still be Cantinflas").

Over 40 famous performers make s, including , , and to name a few (a complete list of cameo appearances is listed below.) Indeed, this film is credited with popularizing the term .

The movie holds the record for the highest number of s ever employed. Fact|date=June 2007

Although not nominated for best original song, the film's theme song "Around the World" (music by Victor Young, words by ), became very popular. It was a hit for in 1957, and was a staple of the easy-listening genre for many years: "Around the world I searched for you / I traveled on when hope was gone to keep a rendezvous ... No more will I go all around the world / For I have found my world in you".

Around 1976, after its last network television broadcast on CBS, UA lost control of the film to (widow of producer Michael Todd and who had inherited some portion of Todd's estate). In 1983, acquired the rights to the film from Taylor, and reissued the film theatrically in a re-edited 143-minute version. In the years that followed, a pan-and-scan transfer of the 35 mm version (presented at its full 183-minute length) was shown on cable television.

In 2004, WB issued a digitally restored version of the 35 mm incarnation on DVD, also at its full 183-minute length, but also including the original intermission, Entr'acte, and exit music segments that were a part of the original 1956 theatrical release, and for the first time on home video at its original 2.2:1 aspect widescreen ratio.

This restored version was reconstructed from the best available elements of the 35 mm version WB could find, and was subsequently shown on . The original elements from the 70 mm Todd-AO version (as well as the original prints derived from these elements) still exist, albeit in faded condition due to the passage of time, but remains to be formally restored by WB.

Warner's retained Andy Pratt Film Labs who in conjunction with Eastman Kodak developed a method to remove the cracked and fading to brown, clear lacquer from the original 65 mm Technicolor negative. Warners did nothing further to restore the negative. The 65 mm Negative was used for the dvd release. Due to costs of making a 70 mm release print even without magnetic striping, using dts disk for audio, there are no immediate plans for any new prints. The 65 mm roadshow print negative was used for the dvd release. Had any 35 mm Anamorphic elements been used the aspect ratio would have been 2.35:1. Mike Todd had limited 35 mm anamorphic prints made with a non-standard compression ratio to provide a 2.21:1 viewing experience. These special 35 mm prints are called Cinestage, the same name of Mike Todd's showcase theatre in Chicago.

Best available prints of the 70 mm version have recently been exhibited in revival movie houses worldwide. As of 2007, WB remains the film's rights holder.